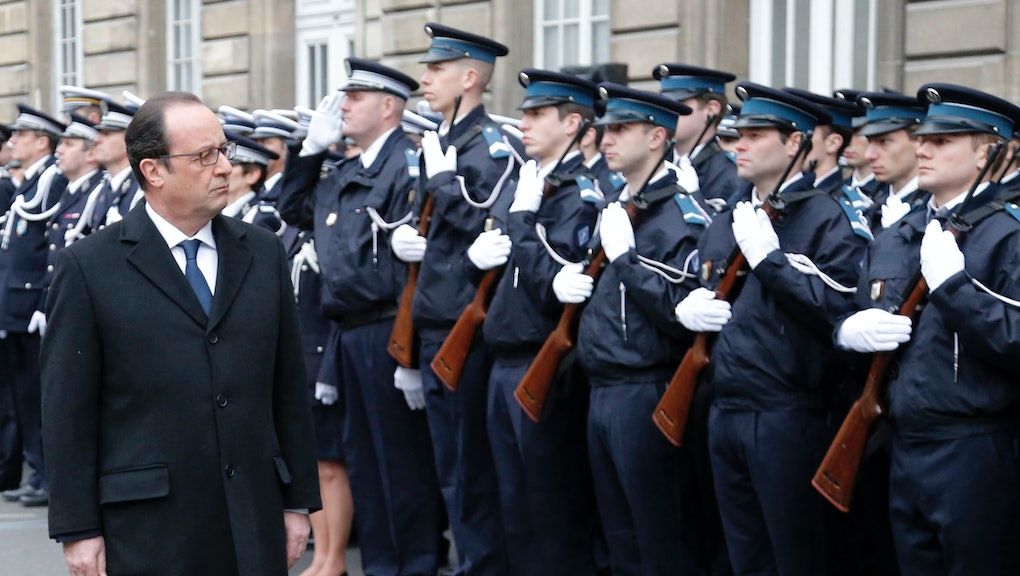 In case you needed a reminder of all of the wrong ways a country can respond to a terrorist attack, just take a look at the homepage of the Associated Press from Wednesday morning:

Following the terrorist attacks on satirical newspaper Charlie Hebdo, France's response has been unfortunately reminiscent of the U.S.'s response to 9/11: It has ramped up military deployments abroad and restrained civil liberties at home.

More military deployments: The U.S. similarly upped its fight in the war in terror against Iraq and Saddam Hussein after 9/11, even though al-Qaida took responsibility for the attacks. On Tuesday, France's lower house of Parliament voted to extend airstrikes against the Islamic State group in Iraq (which one of the three men in the attacks claimed allegiance to, while the other two affirmed associations with al-Qaida).

Increased security and surveillance: France's plans to increase surveillance and double down on monitoring terrorist activity mirror America's post-9/11 surveillance state. Just months after al-Qaida hijacked four airplanes in a planned terrorist attack, the U.S. passed the Patriot Act, which gave the government the "authority to secretly search private records and monitor communications, often without any evidence of wrongdoing." After the attacks, the U.S. government held and investigated 762 detainees, mostly Muslim.

On Tuesday, French President François Hollande announced new security measures to the French National Assembly, including "the increased monitoring of both the travel of suspected radicals, as well as the closer monitoring of communications and the Internet for signs of extremism." On Wednesday, French authorities announced that 54 people had been arrested for the attacks last week that left 17 victims dead. The arrests fall in line with the country's increased efforts to "crack down on hate speech anti-Semitism and glorifying terrorism," the AP reports.

But this kind of response won't work. As Bloomberg points out, 9/11 "inaugurated a war culture in America" and deteriorated American opinion of the Muslim population as a whole. Even now, roughly 14 years after Sept. 11, 2001, Americans still feel colder toward Muslims than toward any other religious group, according to a Pew Research Center poll taken in July.

Already, the violence in France is being "used to fuel support for the far-right, anti-immigrant, xenophobic politics throughout Europe," Bloomberg reports. Despite the fact that over a decade has passed between the two attacks, it's very clear that some Western countries still play out the same knee-jerk response when hit by terrorism.

We've seen how this has played out in the past for the U.S. And if France continues down this path, it may only be a matter of time until the country is facing its own series of ethnic crises, not to mention deadly and seemingly unending conflicts.