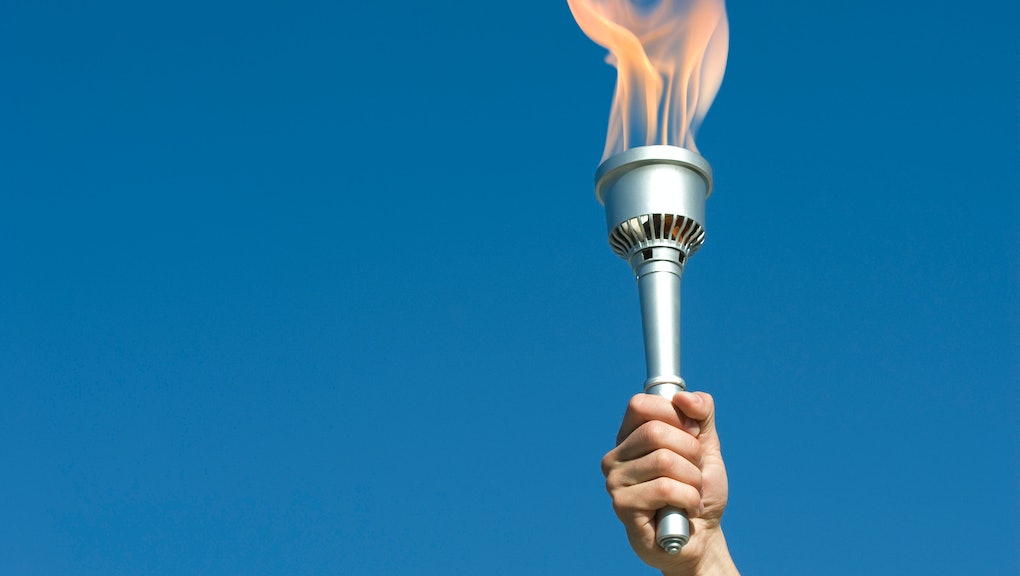 Meet the Grassroots Organization Trying to Save Boston from the Olympics

Behind closed doors, the United States Olympic Committee chose the city of Boston last week to represent the U.S. in a bid for the 2024 Summer Games.

The city's battle, however, has only just begun.

Despite boisterous support from select parties — the USOC, the Boston 2024 campaign team and even Marty Walsh, the new Boston mayor — the city's proposal to become America's first Olympic host since Salt Lake City in 2002 hasn't been welcomed with open arms.

Leading the charge against Boston's bid is No Boston Olympics. Hellbent on quashing Boston's bid to host the games, the grassroots volunteer organization is the brainchild of Chris Dempsey, Liam Kerr and Kelley Gossett, all of whom live in the Boston area. No Boston Olympics is operated by people "in their early 30s who have some background and experience in this world," as Dempsey told Mic.

The group, as Dempsey says, wants to see the city make smart decisions with its resources.

The Olympics are "something that benefits a limited number of people, and it comes at the expense of the everyday citizen and taxpayer in Massachusetts," he said. "It was very clear to us that this was not and should not be a top priority for Massachusetts."

The organization sprung up near the end of 2013 and has been increasingly active in the public sphere ever since. In the months leading up to the USOC's decision, they debated former Boston City Councilor Mike Ross, penned an op-ed in the Boston Globe and were profiled in myriad news stories in local and national outlets. They also produced video interviews with Boston residents and have around 5,000 combined followers on Twitter and Facebook.

"We're just people that care about the choices that Massachusetts makes as a commonwealth and want to see us choose the right public policies," Dempsey, 32, said. "We want to have some influence in that debate because we feel so strongly about this big issue."

Why is there such strident opposition? On the surface, hosting the Olympics is an intoxicating proposition. It draws an influx of visitors, gives the host city a tremendous boost in visibility and provides an excuse to build shiny, big-ticket items like stadiums and athletic facilities.

But it also comes at a significant cost. A recent study of expenditures for the games from 1960 to 2012 found the budget goes over "with 100% consistency," with an average cost overrun of 179%.

The financial troubles of the 2014 Winter Olympics in Sochi, for example, are well-documented. Despite a reported price tag of roughly $50 billion, visitors were left with barely functioning hotels and an opening ceremony that didn't quite cut it. Montreal's famous foray into the spectacle in 1976 nearly bankrupted the city, the pricy 2004 Games in Athens are now a source of anger for a country battling economic turmoil, and though Olympic stadiums may initially look snazzy, many of them morph into derelict white elephants.

In the eyes of No Boston Olympics, these economic costs far outweigh the pomp and circumstance. "When economists have studied the impact of the games, they haven't found that they've left cities better off," Dempsey said. "It just does not help your local economy in the long run."

Dempsey, who is son of public schoolteachers and has a background in transportation policy, said he's seen how difficult it is to fund public projects that matter.

"Because you spend these dollars and focus your attention on [these] things, you're not paying attention to the core issues that make life in a place like Massachusetts easier on a day to day basis," he said, citing the opportunity cost of diverting attention from pressing issues like education and health care.

"Why would we consider spending money on a velodrome and a stadium and an aquatic center when we didn't even have the funding to do the basics?"

What the supporters say: The backers of Boston 2024, the nonprofit that organized the bid, argue that they can finance the games for just under $5 billion. They contend that the city can use its universities' athletic facilities and existing public transportation system, and they've said public investment "will be confined to roadway, transportation and infrastructure improvements." Walsh has also promised that taxpayer money won't be used to build venues.

"The fact that we don't have to reinvent the wheel is part of why we feel this is a very responsible plan," Erin Murphy, executive vice president of the group, told CNBC. Multiple requests for comment from Northwind Strategies, part of Boston 2024's public relations arm, were not returned.

Smith College economist Andrew Zimbalist, author of Circus Maximus, which examines the costs of hosting the Olympics, questioned these pledges. He recently told the Associated Press that the proposed budget is a pipe dream, that the games would end up leaning on local law enforcement departments to help them get the job done — the costs of which would inevitably land on the shoulders of taxpayers.

"To say that there's going to be no public money is ridiculous on a number of levels," Zimbalist said.

Part of the problem has been the process. The proposal that Boston 2024 presented to the USOC has stayed in a locked box. The public was never aware of what went into the bid, which hasn't sat well with No Boston Olympics.

To this end, Murphy told the Associated Press that the offer, minus any details that would put the city at a competitive disadvantage against its international rivals, would be released soon. "Boston 2024 will work with our elected leaders to conduct a robust public process that will inform and shape our bid proposal to the IOC," she said.

For Dempsey and No Boston Olympics, that's too little, too late. "It is like holding a committee on whether to close the barn door when the horse has already left," Dempsey told the New Yorker. "Public meetings should have been held a year ago, when the proposal to bid for the Olympics was first put out there."

The lack of transparency has also fueled anxiety that Boston's bid will primarily benefit corporate and political elites. The chair of Boston 2024, John Fish, is CEO and chairman of Suffolk Construction, one of the largest private companies in the country; in 2012, Boston magazine declared him the most powerful person in Boston.

While Fish has recused himself and his company from bidding on projects allotted for the games, the Boston Herald reported that he still plans to go after contracts with the state transportation and college building agencies that will likely be involved in the potential lead up to the Olympics.

Given that Boston 2024 has promised they will only use public funds for transportation and infrastructure, it's difficult to imagine a scenario in which Fish and his company won't benefit from these contracts. "It would be suicide if I put myself in the situation where I couldn't work with existing clients," Fish told the Herald. "I can't take myself out of the game."

What do people in Massachusetts think? It's a mixed bag. Some are happy with the bid, while others are less than pleased. A recent poll conducted by Sage Consulting found that 55% of Massachusetts residents supported hosting the Olympics, while 40% were opposed.

There's a large caveat, however. When asked about the use of public funding, 61% said they would oppose the games if tax dollars were used; only 33% would support them.

"I remember how embarrassing the Sochi opening ceremonies were, in spite of spending $51 billion on the entire event," Boston native Tony Serio told Mic via email. "I don't want the joke to be on us. In fact, I think that Boston would be much better off without the Olympics because it would piss too many people off."

The legacy of the Big Dig, an albatross of a construction project that cost almost $15 billion and took nearly 15 years to complete, is also a concern, though Walsh stressed the Olympics wouldn't morph into the Big Dig's big brother.

"Boston is a place where it's very important to discuss ideas, and to have a conversation," Dempsey said. "I think people are very perplexed by Boston 2024's approach of keeping it all secret and not sharing it and not having it be transparent and open."

What's next? Walsh has said the process will be the "most open and transparent and inclusive process in Olympic history," but it remains to be seen whether that prediction will prove true.

At a public meeting Wednesday night in Boston — the first public discussion, pro or con, since the city won the bid — No Boston Olympics presented its case. "It's an immense distraction from other pressing priorities. And I think you come to the conclusion that while it's something you can do, it's something we shouldn't do," Dempsey told the crowd.

While the group had initially hoped to nip Boston's bid in the bud completely, they now face a different battle — one that may well take them all the way up to the International Olympic Committee.

At the end of the day, however, they won't consider the effort a failure, even if Boston does ultimately host the 2024 Summer Olympics.

"Even in a world where the Olympics are awarded to Boston in 2017 and come to Boston in 2024, we think that we will have made the Boston bid hopefully better and more responsible," he said. "It's much better to have this watchdog force as part of the conversation than just having it all be one-sided."