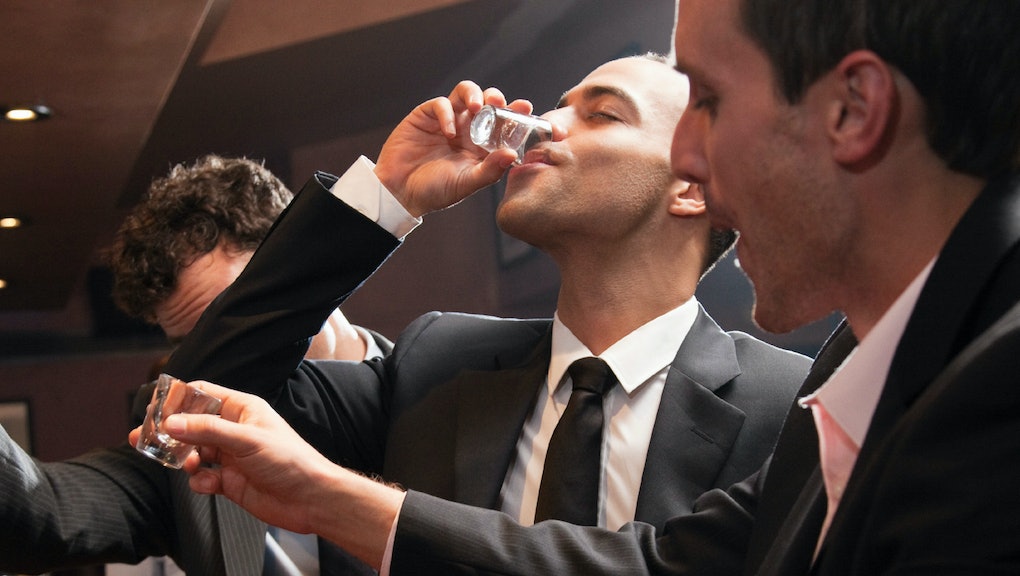 Too Much Hard Work Is Having a Surprising Effect on Americans

Whoever invented the happy hour was on to something.

Research published Tuesday in BMJ by a team of scientists from the Finnish Institute of Occupational Health shows a clear connection between working long hours and being a drink-slinging party monster. The stress of dedicating most of their time to work may be leading employees into dangerous drinking habits or outright alcoholism.

The study: Researchers pooled data from 61 studies conducted in 14 countries, collectively sourcing the data from the working and drinking behaviors of more than 330,000 people. The data was from cohort studies, which track people over long periods of time.

What they found was a clear-cut connection between long working hours and unhealthy levels of drinking. People working 49-54 hours a week were 13% more likely to begin drinking at risky levels (considered to be 14 drinks a week for women and 21 for men). Neither the nature of the employee's job, nor their sex, age, socioeconomic status and geographical location, mattered. Basically, a 50-year-old male janitor in the Bronx who worked 50 hours a week would be just as likely to take up the bottle as a 30-something female derivatives trader in London with similar hours.

"We think that some people may cope with excess working hours with habits that are unhealthy, such as using alcohol," study lead Marianna Virtanen told New Scientist. "The symptoms they try to alleviate with alcohol may include stress, depression and sleep disturbances."

Unfortunately, neither is particularly good for your body. While killing a huge workload and then a six-pack might sound cool, crushing it day-in and day-out can have serious impacts on your body.

The authors warn of "adverse and serious effects on employees, such as absenteeism, inefficiency, poor performance, impaired decision-making, damaged customer relations and injuries at work."

Heavy drinking has other, lesser consequences as well. Harvard researcher Cassandra Okechukwu told Time: "If people are [engaging in] risky drinking, they don't sleep well, they're not as socially engaged. It's really important for work places to pay attention to the productivity of their workers and work environment."

Americans in particular should be concerned. U.S. employees work some of the longest hours in the developed world. Gallup polling released in September 2014 found that the average American workweek is now approximately 47 hours, or nearly one extra day of work. Americans work longer hours than their European counterparts and are much more likely to do work on the weekends. About 40% of U.S. employees clock more than 50 hours a week.

It's probably not a coincidence that the U.S. has a severe binge-drinking problem compared to many other rich, developed countries. According to the Washingtonian, the Centers for Disease Control estimated the cost of binge-drinking at $223.5 billion (or $746 per person) in 2006.

If your workload is driving you to drink, perhaps it's time to think of a better way to handle that stress. Is working constantly worth the trade-off to your health?