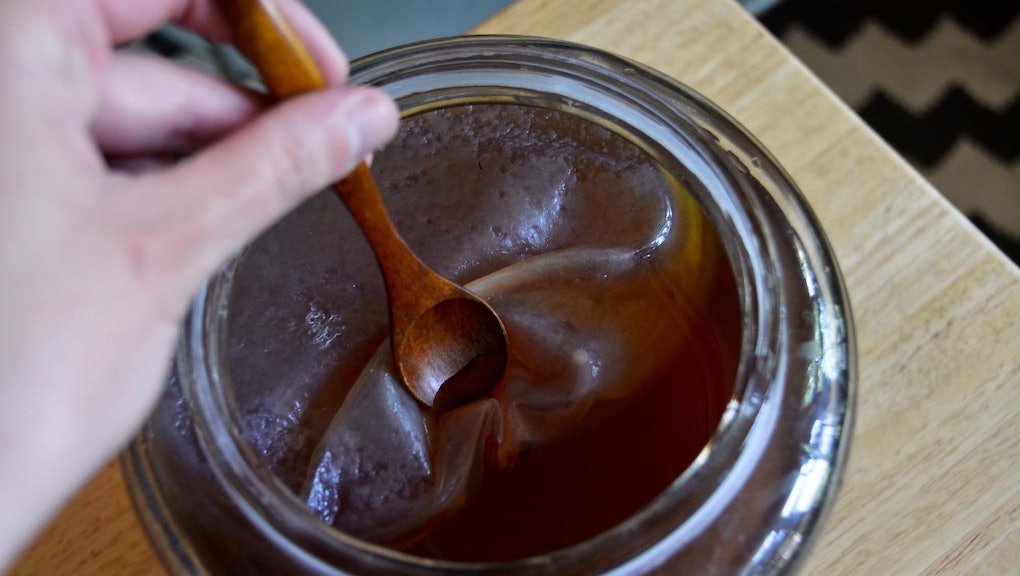 There's Bad News for Hipsters Who Swear By Kombucha

We're not even one month into 2015 but already kombucha is gunning hard for the trendy superfood honor earned by kale in 2014. But it might not actually deserve it.

Kombucha is undeniably on the rise. Not only do recent Google searches reflect a growing curiosity about the probiotic tea, but sales are way up, with some companies reporting annual sales increases of up to 73%. Errol Schweizer, Whole Foods' executive global grocery coordinator, told CNBC, "Depending on the store, kombucha now occupies about one-third of our refrigerated functional-beverage shelf space."

Kombucha's supposed health benefits might be what's propelling the drink to the top, despite the fact that it grosses out a lot of people. Luckily, if the idea of drinking a fermented, clumpy tea for some kind of miracle cure sounds nauseating, we've got some news: You might be onto something.

What's so healthy about fermented tea? 'Booch believers credit the tea with everything from improving digestion to curing cancer. Others say it can lessen joint pain, liver problems and more. If it makes you sick, kombucha can probably fix it.

Or not. As Andrea Giancoli, spokeswoman for the Academy of Nutrition and Dietetics, told NPR, "There is really very little evidence to support any kind of claims about kombucha tea. So we don't know if it does anything at all."

So why do people put so much stock in this 2,000-year-old beverage? It's one-part belief in ancient traditions, one-part the wonder ingredient that actually makes kombucha seem so gross: a blob of microbes known as a "mother," or SCOBY. An acronym for "symbiotic culture of bacteria and yeast," SCOBYs combine during fermentation into blobby discs (think a cross between Jell-O and flan) that hangs out on top of the liquid, forming a jelly-like layer of protection from any unwelcome bacteria in the air, while converting sugar into carbon dioxide and ethanol, more commonly known as alcohol.

The result: a vinegary, carbonated probiotic beverage that can leave an unwelcome mucous-like coating and a sour taste in your mouth. For those who can't take the taste, companies have flavored it with everything from ginger to guava, not to mention combined it with trendy ingredients like chia seeds.

As for health benefits, those possibly come from kombucha's probiotic status. Many people believe fermented foods and the probiotics they contain are not only good for you but necessary for your digestive system. Studies have found evidence suggesting probiotics might reduce weight gain, decrease anxiety and depression and boost your immune system.

Not exactly a "superfood": But it's the microbes, not the 'booch itself, that have the health benefits. Beyond that, there's little scientific evidence that kombucha is all that good for you. In fact, though people have been drinking it for 2,000 years, it hasn't made everyone better off. Home-brewed kombucha has been linked to heart attacks (and one death), as well as lead poisoning. In the less extreme, it can also cause upset stomachs, nausea and allergic reactions. And despite the cult of kombucha, a 2003 study found no evidence of it containing any health benefits.

Because bottles of the stuff regularly cost up to $5 in stores, habitual drinkers often turn to making it at home, which is where things can get dicey. Fermenting the beverage in a ceramic container can leach out chemicals, including lead, that may be contained in the glaze. (Any health benefits kombucha may have to offer are definitely canceled out by lead poisoning.)

Another potential problem is a bacteria called Aspergillus, a toxin-producing fungus that can appear when the acidity levels in home-brewed kombucha, the ones that prevent "bad" bacteria from surviving, are too low — something an inexperienced brewer might have a hard time detecting.

Then there's that other small fact: Kombucha is kind of alcoholic. In 2010, Whole Foods recalled the beverage from its stores due to its alcohol content, and Honest Tea scrapped plans to make their own brand of kombucha after discovering alcohol levels over 0.5%, the maximum allowed by law. In the wake of the recalls, kombucha manufacturers had to make the decision to keep their brews below the allowed ABV or become something like a healthy beer. Popular kombucha brand GT's did both. Kombucha alcohol levels are still lower than that of, say, Smirnoff Ice; but those who are sensitive to or avoiding alcohol should beware.

So for all of you who think 'booch is gross, here's some validation: Kombucha isn't a proven superfood you should feel compelled to gulp down. And if you're looking for a probiotic item to add to your daily routine, there are plenty of other foods, like yogurt, that do the trick without the potential peril — or the gooey SCOBY bits.