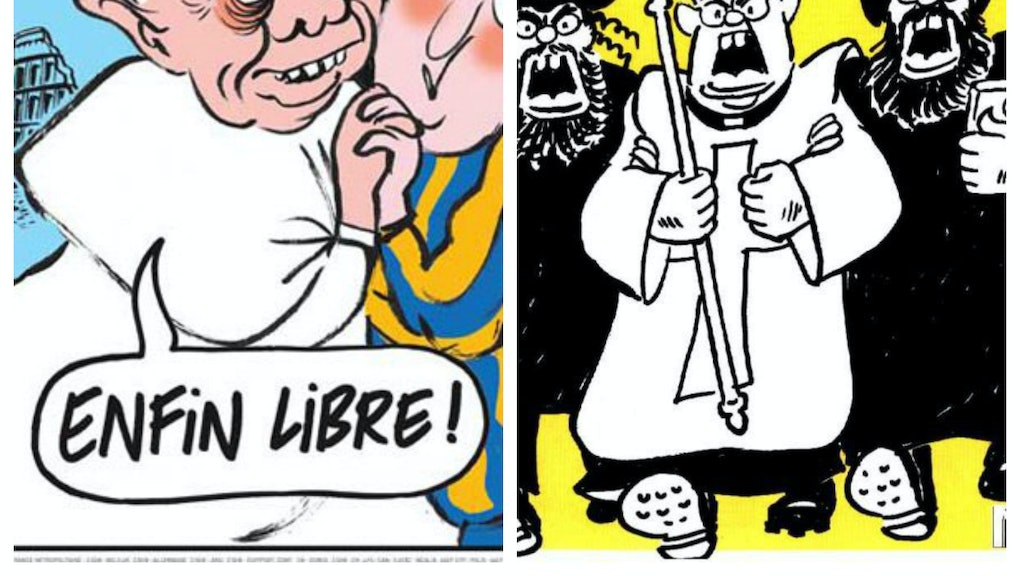 Pope Francis on 'Charlie Hebdo': There Are Limits to Free Expression

His holiness Pope Francis has made it clear: #IlN'estPasCharlie.

In a statement to the Associated Press regarding the Jan. 7 attack on French satirical magazine Charlie Hebdo in Paris, Francis told reporters there are limits to freedom of expression, especially when it insults or ridicules someone's faith. "If my good friend ... says a curse word against my mother, he can expect a punch," Francis said, throwing a faux punch toward one of his aides aboard the papal plane.

His holiness is not hot on satire: Millions around the world have declared "Je suis Charlie" in support of the magazine, attacked by Islamic extremists in apparent response to Charlie Hebdo's history of publishing inflammatory cartoons of the Prophet Mohammad and other religious figures. The massacre, as well as a subsequent attack on a kosher supermarket, killed 17 people.

Although the Vatican issued a joint declaration with prominent French imams that denounced the attacks, the church also urged journalists to treat religions with respect: "Considering the impact of the media, the (signatories) invite media leaders to provide information that respects religions, their followers and their practices, thus promoting a culture of encounter."

Francis, responding to a French journalist about whether the limits of freedom of expression, went further: "There are so many people who speak badly about religions or other religions, who make fun of them, who make a game out of the religions of others. They are provocateurs. And what happens to them is what would happen to [my aide] if he says a curse word against my mother. There is a limit."

So much for turning the other cheek? The pope — the monarch of a theocratic city-state with only one official newspaper, which doesn't feature funnies — was careful to couch his statement regarding protections of religious dignity in the idea that it's "aberration" to kill in the name of God, and that religion can never justify violence. But the corollary of what Francis is saying is that if a journalist or a cartoonist or a layman says or does something that mocks the faith of beliefs of others, they should expect a violent response, whether it be a punch in the nose or a volley of bullets.

Rather than telling journalists they shouldn't critically evaluate religion or those who practice it, we have an idea for an alternative statement for Francis: Luke 6:29. "Whoever hits you on the cheek, offer him the other also; and whoever takes away your coat, do not withhold your shirt from him either."