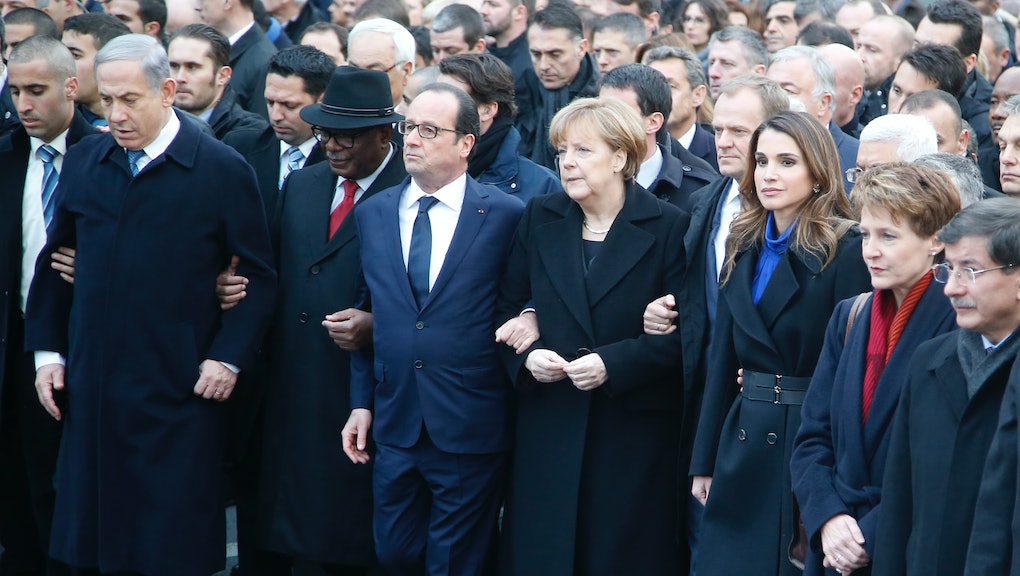 Photoshop is a great way to prove a point.

After HaMevaser, an Israeli ultra-Orthodox newspaper, removed all female leaders from photographs of the million-strong Charlie Hebdo solidarity march in Paris last weekend, Irish satirical newspaper the Waterford Whispers News fired back with some editing of their own.

The paper's response? To remove all of the male leaders from the photo that HaMevaser had edited, leaving just three women leaders in the shot.

This isn't the first time an ultra-Orthodox publication has tried to take women out of the picture. According to the New York Times, in 2011 Brooklyn, New York-based publication Di Tzeitung removed then-Secretary of State Hillary Rodham Clinton and another woman from an iconic photograph taken in the White House Situation Room during the raid on Osama bin Laden's compound.

Moreover, ultra-Orthodox publications "generally avoid pictures of women for reasons of modesty," as their intended audience typically are not receptive to either photos of women or women in public office.

In light of the recent tragedy of the Paris attacks, the publication's decision to eliminate women from the scene was particularly controversial. One commenter on a blog for a left-leaning Israeli newspaper lambasted the decision of "denying the fact that in the wider world, beyond the ultra-Orthodox Jewish community, women do stand on the world stage and shape events," the New York Times reported.

While the Irish paper proved a point about the brashness of the decision to take women out of the picture, they also underscored how few women serve in public office. For those leaders who remained in the shot, however, the edited photo has one overarching message: These boots are made for walking.