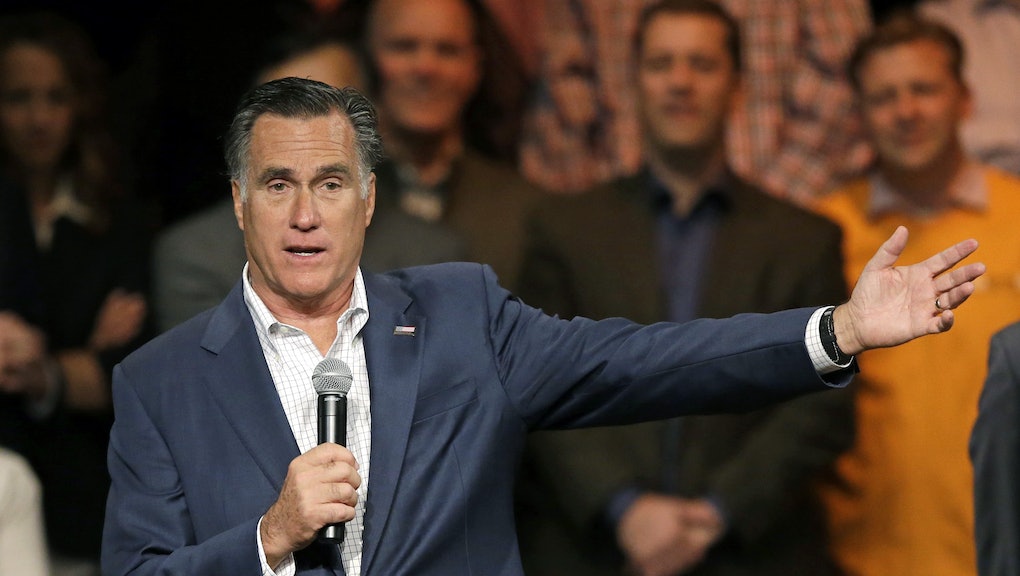 "He had his chance, he mishandled it, you know? I think he's a terrible candidate."

That was Rupert Murdoch, the right wing media mogul, chairman of News Corp. and creator of the Fox News Channel. He delivered the delivered the verdict Wednesday night at the Manhattan Institute after being asked to weigh in on news that Mitt Romney is gearing up to launch a third bid for the White House.

While Murdoch's assessment is not exactly original — Romney's 2012 campaign foibles are the stuff of legend — the decision to make his feelings known so early in the process suggests Romney will face immediate and significant resistance if he enters the 2016 Republican primary race. Murdoch's statements are emblematic of the growing backlash, among both conservatives and establishment Republicans, against the prospect of another Romney run.

The backstory: Fox News is a billion-dollar business for Murdoch, and his dominion over cable news in the U.S. is only growing. He and Fox News president Roger Ailes, a former Nixon aide and longtime conservative powerbroker, have consolidated unparalleled control of the GOP narrative over the past two decades.

All of which makes Murdoch and Ailes' well-documented displeasure with Romney a real problem for the former Massachusetts governor and Republican nominee. In Gabriel Sherman's biography of Ailes, The Loudest Voice in the Room, Ailes is reported to have compared Romney to "Chinese food" in 2012.

"Twenty minutes after you eat it," the Fox News boss said, "you can't remember what you had."

Ailes, with Murdoch's backing, went so far as to recruit former CIA Director Gen. David Petraeus to enter the tht 2012 race during the early days of its primary contest. Romney was stumbling badly and, at points, appeared in danger of losing to a fringe candidate like Rick Santorum or Newt Gingrich. The plan, according to the Washington Post's Bob Woodward, was for Ailes to leave Fox News and run a Petraeus campaign with Murdoch pledging to finance the whole operation.

Petraeus didn't bite. But the message was clear then as it is now: Rupert Murdoch will go to great lengths to keep Romney off the Republican ticket. And this time, he won't have to go shopping for candidates or willing messengers.

The party turns on Romney: It's not just the Fox News bigwigs who are trying to stick a pin in the Romney balloon. Over the last 48 hours, Politico and the New York Times each published a scathing chronicle of the rapidly growing and increasingly public Republican backlash against Romney.

"A Republican backlash against Mitt Romney that had been simmering for days boiled over on Wednesday as conservatives across the GOP spectrum panned the prospect of another presidential bid by the former Massachusetts governor and two-time loser on the national stage," Politico reported.

"I think the best way to counter something from the past is with something new," Wisconsin Gov. Scott Walker, a potential candidate himself, told Politico.

"People say he is a very fine man, but he had his chance," Frank Keating, the former governor of Oklahoma, told the New York Times. "I think they're looking over his shoulder at the next attractive candidates."

Most importantly, though, the Wall Street Journal, which is owned by Murdoch's News Corp., declared in an editorial on Tuesday that "the question the former Massachusetts Governor will have to answer is why he would be a better candidate than he was in 2012... The answer is not obvious." The title of the editorial – "Romney Recycled" — suggests that maybe it is.

Why is this even an issue? Just a few months ago, the idea that Romney would hop into the ring again was kind of a joke, the subject of idle musing among the political chattering class. The best argument for his even considering it was rooted in former Florida Gov. Jeb Bush's seeming reticence to make a decision. Well, Bush is all in now. But rather than putting him off the scent, Bush's arrival seems to have Romney drooling for another bite.

In the aftermath of Bush's announcement that he would launch a pair of political action committees and "actively explore" a run for president, Romney and his allies turned up the volume on their own whisper campaign. By the end of the first week of 2015, Romney told a room of donors, "Everybody in here can go tell your friends that I'm considering a run."

Romney is also said to believe that the developments overseas in the past six months, especially the Russian crisis, vindicates foreign policy positions he was ridiculed for during the 2012 campaign. Chief among them his assertion to CNN that Vladimir Putin's government was America's "number one geopolitical foe."

That comment, made in March 2012, was met with a mocking response from President Obama in an October debate. "The 1980s are now calling to ask for their foreign policy back," Obama said. "The Cold War's been over for 20 years."

This particular episode — which Romney's fans harped on throughout the spring — along with a (kinda weird) belief that Romney has the ability to run a more conservative campaign than Bush, seems to be the guiding rationale for this latest surge of interest.

Murdoch's man: Despite his many qualms with Romney and those failed attempts to edge him out of the race, Murdoch eventually came around to the candidate in 2012. Fox News was, as always, a reliable and spirited mouthpiece for the Republican's campaign to replace Obama.

This time around, Murdoch seems intent on picking a horse early, and it is most certainly not Romney. At the same event where he expressed displeasure with Romney, Murdoch remarked to Fox News analyst Judith Miller that while he hasn't chosen a candidate yet, "I like Jeb Bush very much."

And that, for Romney, could very well be the most important sign yet that the the third time will not be any kind of charm. Instead, it is likely to be a historic and especially embarrassing final defeat.