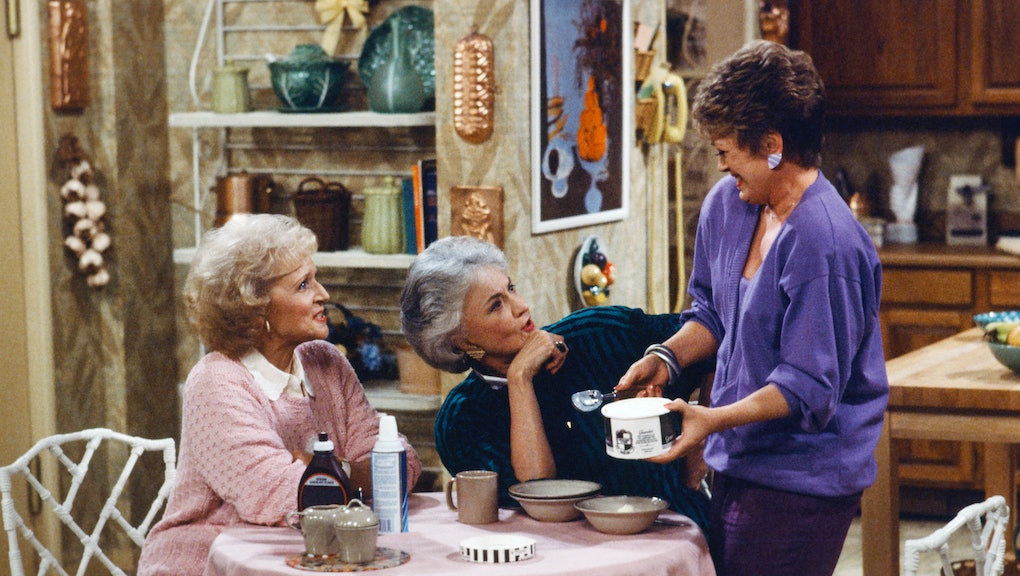 When it comes to sex on TV, we've come a long, long way.

On the previously straitlaced networks, not to mention the HBOs of the world, shows today are more candid, more explicit and more diversified than ever when it comes to sex and love. 2014 was a landmark year for challenges to heteronormative conventions, complex portrayals of gay and trans relationships  and women settling their gazes on men for once (not to mention plenty of actual sex).

But for all that modern progress, there is still a ways to go — which makes the messages of The Golden Girls, which turns 30 this year, more important than ever.

Cheeky, sarcastic and brutally honest, Blanche, Rose, Sophia and Dorothy were not afraid of talking about sex with a freedom that we might take for granted today. Back in 1985, the ladies of The Golden Girls were breaking subtle but powerful ground every episode. The four women, already challenging pop culture norms with their mere ages, vocalized their sexual frustrations, fantasies and inquiries in ways that have drawn comparisons to the Sex and the City friends.

But The Golden Girls did it without glitz and glam, instead presenting a more realistic image that was relatable not only for women but also for many gay men. Open-minded and "queerly coded," they opened their Miami doors, literally and figuratively, to a variety of diverse characters, making arguments for gay marriage, AIDS awareness and reclaiming the word "slut."

All the diverse, empowering, sex-positive TV we have today? We owe much of it to The Golden Girls. Here are just some of the powerful messages put forth 30 years ago that ring true today.

1. No one should be judged for how much sex they have.

While Rose, Dorothy and Blanche have coffee, Blanche questions how many boyfriends naïve farm girl Rose could have possibly had. When Rose answers "56," Blanche gets hilariously angry, because now she knows she isn't the only one with a wild past. Dorothy then dubs Rose "THE Slut, the Poobah of Slutdom." In their jokes about being a "slut," the women reclaim the term, stripping away the shame and proudly owning their own sex lives. And empowering women instead of slut-shaming them is still a message TV needs to hear.

2.  Everyone has the right to love (and sleep with) whomever they want.

Being gay wasn't a simple punchline on Golden Girls. In this scene, Blanche's initial reaction to a lesbian character is confused; she doesn't understand why a woman wouldn't want "all that a man has to offer." But her quick shift into acceptance (and, hilariously, to indignation over the woman not having a crush on her) is a remarkable demonstration of how simple it can be to just accept each other's differences, sans questioning or judgment.

There were few LGBT characters on TV in the 1980s. Golden Girls not only consistently featured them, but also set a tone of acceptance. As Louis Peitzman noted on BuzzFeed, "Its pervasive themes are innately queer, which is why the show has been and continues to be a comfort to men who are gay or just questioning."

3. The conversation about sex doesn't have to stop as you get older.

In a conversation about marital sex, Dorothy says she and her husband stopped having it completely. "I cut off the sex," she says. (Rose, of course, is led to believe Dorothy literally cut off her husband's penis, but that's another story.) Frank and serious discussions about sex, including the lack thereof, didn't happen much on sitcoms during this era. But The Golden Girls showed it was not only OK for women to talk frankly about their sex lives, but that it could be positive and cathartic, as long as they supported one another.

4. Anyone who's found love deserves the right to be married.

With the plot line around Blanche's brother, Clayton, The Golden Girls sent the message that being gay isn't just about sex. In a scene that perfectly sums up the case for marriage equality, Blanche is perplexed and upset about her brother's marriage to another man, wondering why he is "flaunting" his relationship. Sophia wryly responds by asking, "Why did you marry George?" "We loved each other," Blanche responds, "We wanted everyone to know."

"That's what Doug and Clayton want too. Everyone wants someone to grow old with," Sophia explains, educating a very misguided Blanche — and anyone else watching. It's taken 30 years, but finally the rest of the country is catching on to the marriage equality argument.

The Golden Girls' time on the air coincided with the spread of AIDS, an epidemic that deeply affected the male gay community. While the show didn't feature male characters with AIDS, in one episode, Rose finds out there's a small chance she might have come in contact with HIV-positive blood. Her fear-driven reaction leads her to question how she, a "goody two-shoes," could possibly get AIDS. Blanche's response smartly and compassionately refutes the notion that AIDS is "God's punishment," quashing the negative stigma that AIDS carried at the time (and still sometimes does). "AIDS," she says, "is not a bad person's disease, Rose."

7. When it comes to sexual orientation and identity, no one label fits all.

As everyone gears up for Sophia's brother Phil's funeral, Sophia comments that he would have looked great in Blanche's "Satan's secretary" dress — and asks if his penchant for women's clothing made him queer. Blanche corrects her, saying "people don't say 'queer,' they say 'gay.'" Sophia hilariously differentiates between the two with a joke, once again making the conversation about LGBT frank and normalized.

8. No one should be slut-shamed for taking control of their sex lives.

Even TV shows today don't spend much time talking about condoms. But The Golden Girls did, not only highlighting their importance but taking on the shame and stigma around women carrying their own protection. In this scene, after the women are embarrassed by a cashier for purchasing protection, Blanche is admirably unapologetic, claiming that she and her friends are being "morally and socially responsible." Refusing to be slut-shamed, Blanche and the rest of the Golden Girls never apologized for their sexuality — and they helped viewers feel as proud and comfortable as they were.

9. Tolerating difference isn't the same thing as truly accepting it.

Sure, Blanche doesn't mind gay men, she doesn't understand why they have to go and date each other. But with Sophia's perfect response, The Golden Girls underscores the important difference between simply tolerating difference and truly accepting and embracing it. At a time when LGBT individuals didn't feature prominently on TV (not to mention faced serious discrimination in real life), the show's blasé approach to discussing homosexuality was huge.