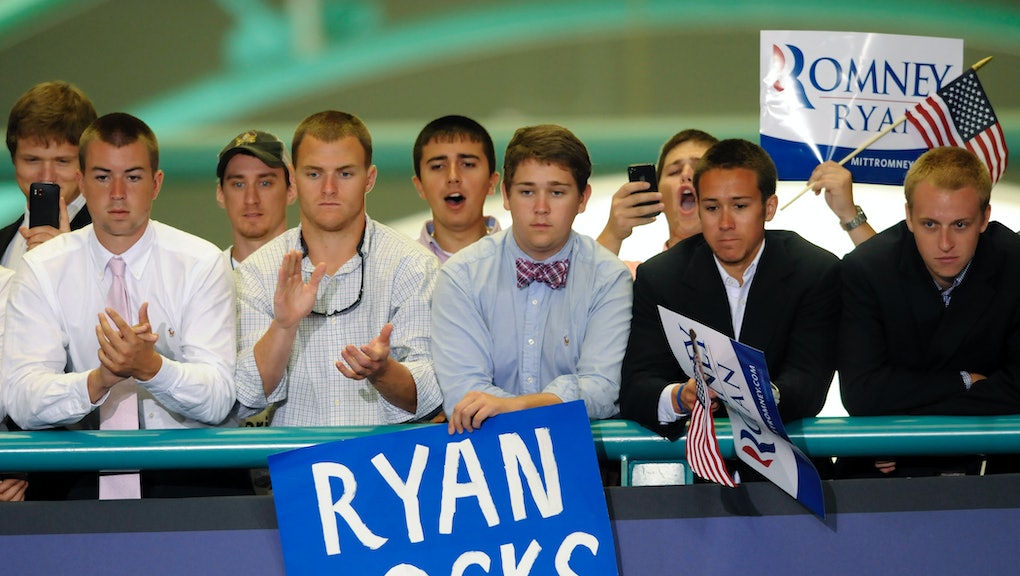 The presidential campaign for the 2016 elections is already very much underway and, as always, the race to win the youth vote is of critical importance. Politico recently reported that Republican operatives have been pursuing a variety of aggressive strategies to snatch up first-time voters in 2016.

The party is devoting energy to mining for data to piece together more and more information about young voters. It's growing its online presence. It's banking on huge registration drives.

But unfortunately for the GOP, in all likelihood it's not going to work. Their focus on data mining and registration is a distraction from a far bigger problem: Millennials skew very progressive in their values, and the Republican Party shows no signs of adjusting their policy platform to acknowledge this reality any time soon.

A growing demographic: According to Politico, more than 8 million people will be old enough to vote for the first time in the next election. Today's 16- and 17-year-olds are a tricky demographic — they're malleable, they're hard to track and they're especially difficult to mobilize on Election Day as they move to new states to attend college and fumble through first-time registrations.

The GOP senses a growing opportunity with Millennials in general, who have grown increasingly disillusioned with Obama over the course of his time in office. Burdened by debt and low, stagnant wages, they haven't been roused by the bright and glossy numbers indicating that the economy's growth and unemployment are improving. Republicans are keen on capturing those among them who feel moved to register the discontent that has been brewing since the economic crisis struck during their adolescence.

While Republicans are right to sense an opening for swinging relatively impressionable voters, they're wrong to assume that nailing down minute details about demographics and registration drives will solve the issue. The issue is far deeper than finesse with mobilization; it requires fundamental reform of its policy platform.

An out-of-touch party: Young Americans are ideologically heterogeneous, but their political values tend to lean much further to the left than the Republican Party. Poll after poll reflects that Millennials are not only more progressive than other generations on average, but that even the Republicans among them are less conservative than their older counterparts.

The Millennial generation as a whole is the most racially diverse and most multicultural age group the nation has ever seen. According to another in-depth Pew study from 2014, they're dramatically less likely to identify as patriotic or religious, compared to all other generational cohorts. They believe in marriage equality, marijuana legalization and finding a humane legal status for immigrants. They're turned off by the death penalty, and as they're more inclined to address climate change. They display deep faith in activist government spending as an effective form of managing social problems.

Obama carried two-thirds of the youth vote even the second time he ran for office — that is, after the magic of his 2008 newness had already worn off. By all accounts, the 2012 Obama campaign was far more effective at reaching and mobilizing young voters than Mitt Romney's. But that wasn't the only reason Obama won young voters. He had a built-in advantage: Millennials are widely disaffected with the values of today's Republican Party.

The GOP has its work cut out for it. It has to bridge intergenerational gaps without alienating the older parts of its base, and it won't be easy. Millennials, the biggest generational cohort in the country, have no personal memory of Ronald Reagan or the Cold War. They do have some memory of a Republican president who coddled the rich, favored the the bankers who held the economy hostage and started disastrous wars. And they have no trouble remembering the Democrat who cleaned up the mess.

The Republicans need an ambitious reformer, one with the resolve to face a base that seems nostalgic for something that the young can't remember.