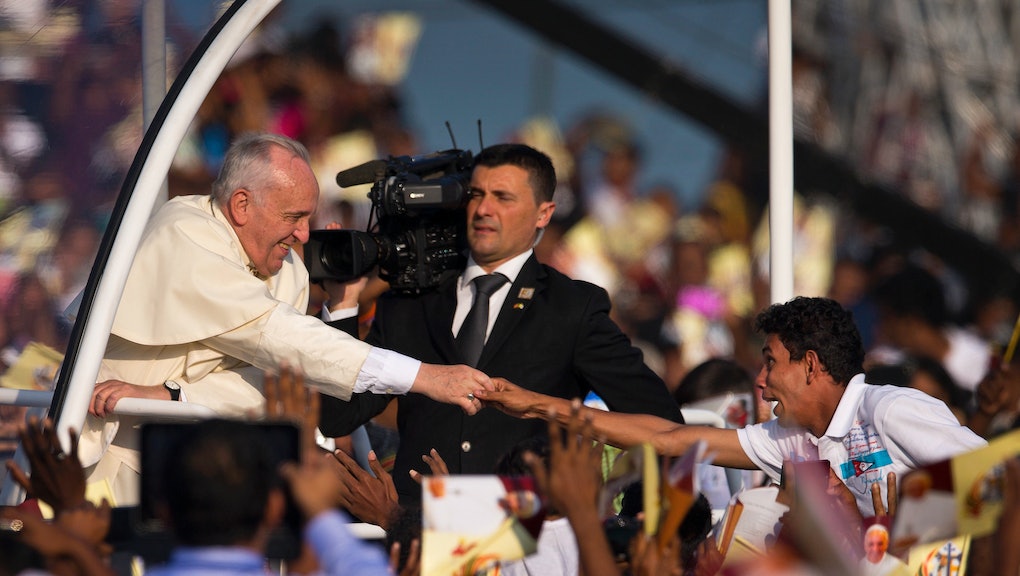 Pope Francis has some harsh words for climate-change deniers: You're wrong.

While en route Thursday to the Philippines to meet with survivors of the 2013 Typhoon Haiyan, the Guardian reports the pontiff took a few moments to clarify that it is beyond all doubt that humans are driving global climate change.

"I don't know if it is all [man's fault] but the majority is, for the most part, it is man who continuously slaps down nature," Francis said. "We have, in a sense, lorded it over nature, over Sister Earth, over Mother Earth.

"I think man has gone too far," he added" Thank God that today there are voices that are speaking out about this."

The pope also criticized the delegates at last month's climate meeting in Peru for a "lack of courage," saying he was disappointed at the lack of progress being made. Francis added that he hoped this year's U.N. climate meeting in Paris would finally "move forward with this."

The background: Pontifical Academy of Sciences chancellor Bishop Marcelo Sorondo said near the end of last year that 2015 would see the start of a massive effort by the pope to mobilize the word's 1.2 billion Catholics against climate change. The pontiff is specifically targeting the this year's meeting in Paris (the culmination of 20 years of negotiations) in an attempt to push the delegates toward a deal that will actually have a serious impact on the environment.

Under Francis' direction, the Vatican wants to cast climate change as a moral issue and failure to act as condemning future generations to a spoiled planet. The Atlantic's Tara Isabella Burton argued that Francis was using "his pulpit to actively shape public discourse about the nature of creation" and linking climate change to a "profoundly optimistic vision of what it means to be human."

The pope's in good company: Francis' stance on the environment broadly mirrors the scientific consensus on global climate change, which virtually every relevant scientist agrees is primarily driven by human activity. Climate scientists are about as confident that human influence is the dominant cause of post-1950s warming as doctors are smoking causes cancer.

While it remains unclear how much influence the pope will ultimately wield on the climate-change debate, there's little doubt that the rapid action he is advocating is necessary to safeguard the planet. The year 2014 was likely the hottest year in recorded human history, while another recent study concluded that sea levels are rising much more rapidly than previously thought.

To avoid catastrophe, humans will need to work together, and it certainly doesn't hurt to have the head of the Catholic Church on board going into the crucial Paris meeting, which could be one of the world's last chances to start a framework that will avoid the worst.