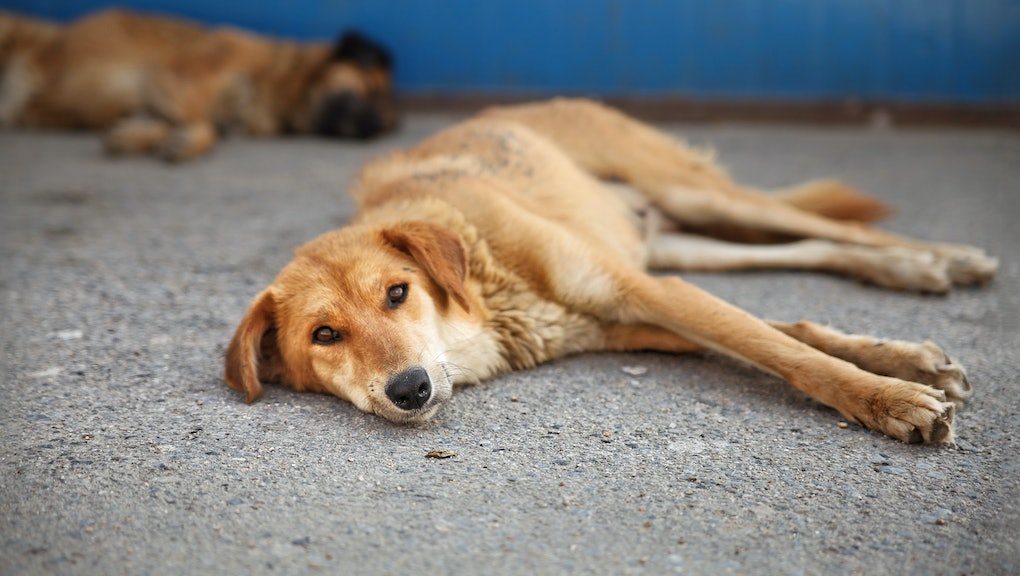 The Surprising Way Scientists Want to Save Shelter Pets

We have a pet problem — or rather, we have a problem with too many potential pets. More than 7 million stray dogs and cats enter shelters every year. About one-third of those dogs (and even more cats) are euthanized.

One solution that's emerged in recent decades is to head off the animal overpopulation problem at the pass. If we really want to cut down on shelter euthanizations, we need to devise a sterilization system that's cheaper and easier than pets going under the knife. And over the last five years, that's exactly what animal advocacy organizations, veterinarians and a smattering of scientists have been trying to do.

It's a big task, since dogs and cats are profoundly procreative. Over the lifetime of one unspayed dog, her offspring can produce 6,000 more pooches; for a cat, that number is closer to 400,000.

Feral animal spaying programs do exist, but they rely on surgical procedures that require time, money and training.

"Veterinarians at high-quality clinics are practically Olympians in doing the surgery," said Joyce Briggs, president of the Alliance for Contraception in Cats and Dogs, a nonprofit that works as a liaison between animal welfare groups, scientists, veterinarians and pharmaceutical companies. "But spaying and neutering is still large and invasive surgery, especially for female dogs, and alternatives would be great to have."

In 2008, Found Animals started funding projects to develop non-surgical sterilization methods, from injectable vaccines to hormonal contraception (yup, that means puppies on the pill). These may be the future of saving lives for animals. People may leave their dogs intact because they can't afford the procedure, or because they just don't get around to it. But nonsurgical sterilization, advocates urge, would be quick, affordable and require less specialized training. Vet techs can't scoop out a dog's uterus and ovaries and stitch her back up, but depending on state laws, they can perform more minor veterinary tasks, like giving shots. Plus, animal rescues could more easily sterilize shelter pets en masse before owners take on (and perhaps shirk) the responsibility.

So far, there's only one FDA-approved sterilization drug on the market, and it's exclusively for male dogs. Vets can administer the drug, called Zeuterin, through an injectable shot into each testicle. Directly targeting sex organs, as Zeuterin does, is the easiest way to shut off reproduction, said Briggs.

But canine "chemical castration" is prohibitively niche, and administering daily, or even monthly, hormonal birth control to pets, let alone shelter animals, isn't exactly practical, especially not for strays. The ideal sterilization method would be a lifelong, or at least long-lasting, shot or pill that works on male and female animals, across different species.

Universal infertility: Safely rendering all cats and dogs infertile is a tall order for any drug. Think about it: Human contraceptive drugs are sex-specific. In 2015, we're only now in the trial stage of developing male birth control. And cats and dogs are so much better at procreation than humans.

The key to disabling reproduction, said Briggs, lies in GnRH, a master reproductive hormone that all mammals have. The hypothalamic region of the brain produces GnRH, which in turn regulates the release of secondary sex hormones from the pituitary gland. There are a number of ways to target and turn off GnRH, and scientists are working on a variety of therapies.

Harvard bioengineer David Mooney just got funding from Found Animals to create a GnRH-attacking vaccine. Mooney, a dog owner himself, has worked on developing a cancer vaccine, but hasn't done research in the animal science realm before.

"It's a difficult challenge," said Mooney, "because the goal is to have a vaccination that would work in multiple species, in both males and females, and we're trying to vaccinate against a normal part of the body, which creates a significant challenge."

A contraceptive vaccine, though more difficult to create, hinges on the same concept as a disease-fighting vaccine. The vaccine stimulates the immune system to attack GnRH and produce antibodies that effectively shut it off. Mooney's goal is to develop a one-time, lifelong vaccination.

Keeping up: America's first low-cost spay/neuter clinic opened in California in 1970. At the time, euthanasia rates were higher than ever — about 20 million cats and dogs were dying a year. Despite the success of the spay/neuter awareness campaigns, research on nonsurgical sterilization didn't really take off for 30 years. As it turns out, that may have been partially due to a strange oversight.

"Surprisingly, we don't have the detailed knowledge of reproductive systems in dogs and cats that we do for other animals — like [farm] animals, which have been studied much more because of their role in food production," Briggs said.

The demand may have changed too. Humane treatment of pets has improved considerably in just the past two decades. For all the heart-wrenching Facebook groups and TV commercials about animal neglect and abuse (looking at you, Sarah McLachlan), Americans both own and rescue more pets than ever before. Since 1970, pet ownership has doubled as euthanasia rates have plummeted.

But, one could argue that the U.S. isn't really the main target for nonsurgical pet sterilization drugs. Other countries have much larger stray pet populations. There are an estimated 600 million stray dogs in the world. In India, 30 million stray dogs are the primary carriers of rabies, which kills about 20,000 people a year, the New York Times reported. The number of stray cats is so large, in the U.S. and elsewhere, that it's hard to estimate. Though people love them, the effects of cats on the environment can be catastrophic. Briggs estimates only a sliver of them are spayed or neutered — maybe 5%

The benefits of a sterilization vaccine for dogs and cats will be worth the hard work, to save future pets from extermination, and humans and the Earth from the impact of quickly multiplying feral animals.

Briggs is optimistic: "Members of the millennial generation, and younger ones, will be around to look back and say, 'Remember when the only alternative to sterilizing litters of puppies was a complete hysterectomy?'"