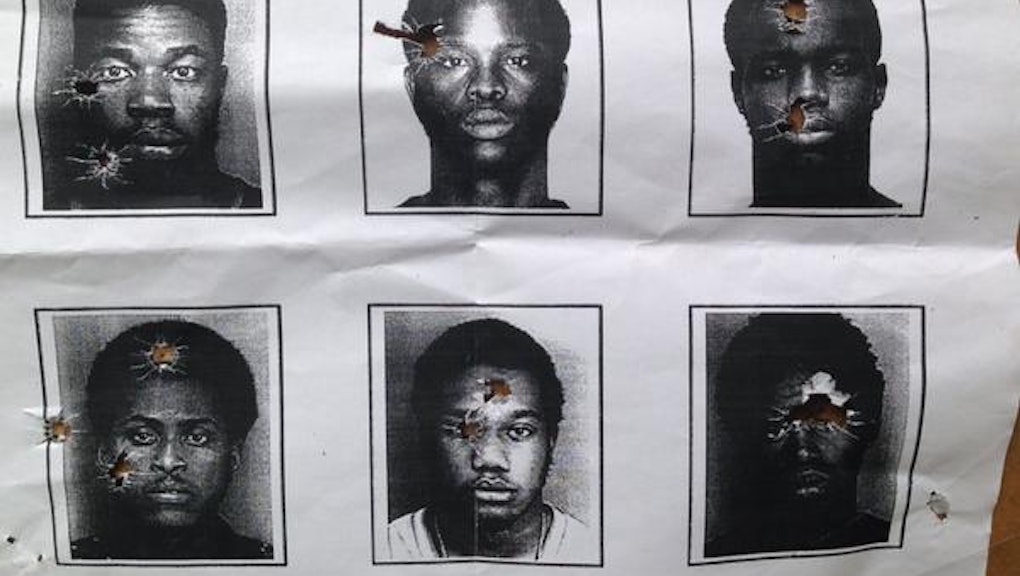 Florida police have some tough questions to answer after a group of National Guardsmen made a galling discovery at a local shooting range.

NBC 6 reports that cops in North Miami Beach were caught using photographs of real people for target practice. All of them were "mug shots of African American men," at least one of which belonged to a suspect that had previously been arrested by the department.

Sgt. Valerie Deant told NBC that she was left "speechless" after finding one of the targets was her brother Woody Deant, who had been arrested and sentenced to four years of jail in 2000 for involvement with a illegal drag race that killed two people. Woody Deant was outraged.

North Miami Beach Police Chief J. Scott Dennis said using real faces was necessary for facial recognition drills and added that "there is no discipline forthcoming" for any officers involved. Chief Dennis added that he was "very, very concerned" about the inclusion of an actual resident of North Miami Beach, but said that the agency used similar sheets of all-Hispanic or all-white targets.

"The use of those targets doesn't seem correct," retired FBI agent Alex Vasquez told NBC. "The police have different options for targets. I think the police have to be extra careful and sensitive to some issues that might be raised."

Why you should care: With tensions between police and minorities rather heated right now, it's more than a little suspect that out of all the options available to Miami Beach's police-sniper community, they chose to print out and shoot at targets of real young black men.

Evidence heavily suggests that officers are quicker to shoot at African-American suspects than those of other races, while federal data likely only captures a fraction of local police killings. CNN/ORC polls have found that just one quarter of non-whites think "none or almost none" of their local police are prejudiced against blacks, while just 21% think that the criminal justice system treats whites and blacks equally.

Another USA Today poll released in August 2014, hot on the heels of the Michael Brown shooting, found that 9 out of 10 African-Americans "say the police do an 'only fair' or poor job when it comes to equal treatment and appropriate force."

"People that oughta be out there protecting us are using us as target practice," Woody Deant told NBC. He's likely right in more ways than one.