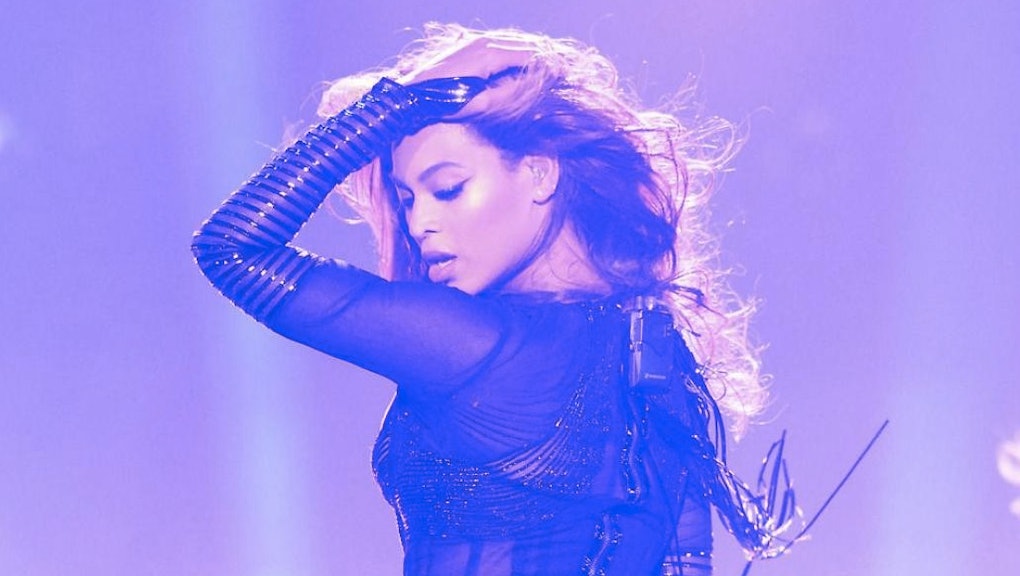 Few things are more hotly anticipated in 2015 than the film adaptation of Fifty Shades of Grey. From early rumors about casting to speculation about just how, ahem, true to the original plot the film would stay, this movie is constantly trending online.

But in all the talk of sex scenes and whether or not the co-stars secretly hate each other, fans have missed arguably the coolest thing about the movie: Its soundtrack is looking to be one of the best releases of 2015.

With the announcement of the movie's track list this week, there's no doubt that the soundtrack (out on Feb. 10) could be better than the movie itself. The artists guarantee big things: Jessie Ware, Sia, The Rolling Stones and Queen Bey herself all have tracks on the album, with Beyoncé contributing not only a remix of "Haunted," one of BEYONCE's best tracks, but also a special new mix of "Crazy in Love," the 2003 debut solo single with now-husband Jay Z that catapulted her from Destiny's Child fame to full-fledged solo superstardom.

Of course, we've known for a while that the soundtrack had a lot of potential, thanks to the early release of two tracks: first, The Weekend's "Earned It (Fifty Shades of Grey)," followed by Ellie Goulding's "Love Me Like You Do." The first song is The Weekend at his best, a "Wicked Games"-channeling track that's sure to score one of the movie's sexier, more sinister moments. Goulding's contribution is one of the best singles of her career, an epic, soaring anthem helmed by Swedish pop savants, writer Max Martin and singer Tove Lo.

Things are adding up for Fifty Shades of massive sales. If the trends from 2014 are any indication, soundtracks are one of the best ways to sell albums in an increasingly singles-only musical economy. The Frozen soundtrack was the second-best-selling album of 2014, coming in at 3.53 million units and bested only by Taylor Swift's mammoth hit 1989, which moved 3.66 million units following its release in October 2014.

Meanwhile, the Guardians of the Galaxy soundtrack was also one of 2014's Top 10 best-selling albums, grabbing Disney the No. 5 spot with 898,000 and making for the first year in Billboard chart history that two soundtracks from one entity have taken up residence in the year-end Top 5 list. Not only that, the Guardians soundtrack is currently selling thousands more copies in its cassette tape release. The Hunger Games: Catching Fire soundtrack and the Fault in Our Stars soundtrack also had big sales success, selling 175,000 copies and 48,000 copies, respectively, in their debut weeks, thanks to contributions from major artists like Lorde and Ed Sheeran.

All of this comes on the heels, of course, of Pharrell's success with "Happy," the dark-horse hit from Despicable Me 2 that came out of nowhere and became 2014's biggest song, selling 6.45 million downloads and becoming the 21st best-selling digital single in Billboard chart history.

So even if you aren't into whips, chains or poorly written self-published erotica, the Fifty Shades of Grey soundtrack is going to be one of the biggest musical events of the coming year — and few fans truly see it coming.