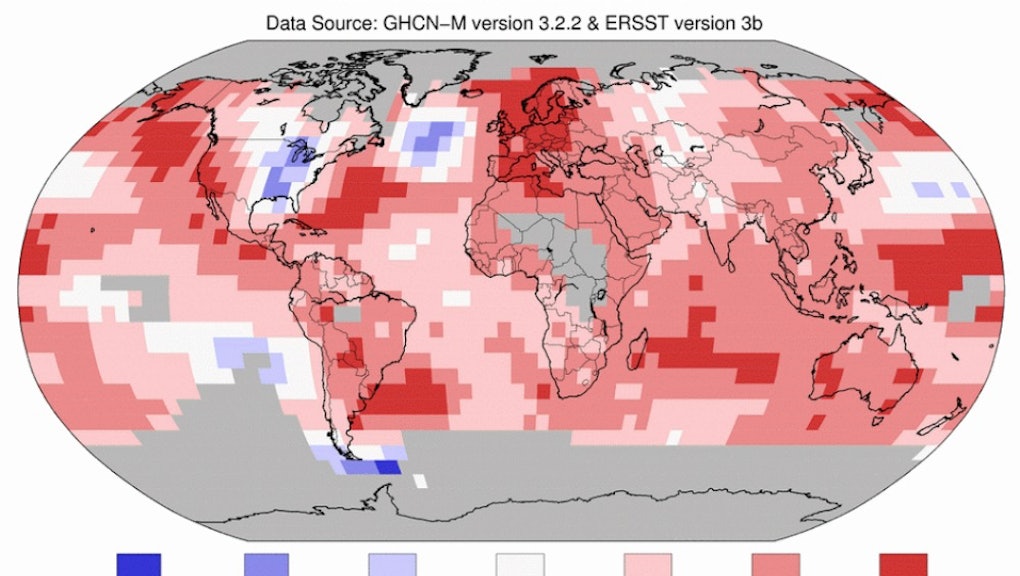 It's Official: 2014 Was the Hottest Year in Recorded History

According to both NASA and the National Oceanic and Atmospheric Administration, 2014 was the hottest year in recorded history.

"In the annals of climatology, 2014 now surpasses 2010 as the warmest year in a global temperature record that stretches back to 1880," New York Times' Justin Gillis reports. "The 10 warmest years on record have all occurred since 1997, a reflection of the relentless planetary warming that scientists say is a consequence of human emissions and poses profound long-term risks to civilization and to the natural world."

According to the NOAA, 2014 also marks the 38th straight year in which global annual temperatures were above average.

The report confirms previous findings by other meteorological organizations. According to the Japan Meteorological Agency, 2014 had the highest average global temperatures recorded by scientists in the more than 120 years since the agency began systemically recording climate data.

This isn't just more gloomy data: The NASA/NOAA report may actually provide the data necessary to spur action on climate climate by the U.S. government.

"Longstanding claims by climate-change skeptics that global warming has stopped, seized on by politicians in Washington to justify inaction on emissions, depend on a particular starting year: 1998, when an unusually powerful El Niño produced the hottest year of the 20th century," Gillis wrote.

"With the continued heating of the atmosphere and the surface of the ocean, 1998 is now being surpassed every four or five years, with 2014 being the first time that has happened in a year featuring no real El Niño pattern. Gavin A. Schmidt, head of NASA's Goddard Institute for Space Studies in Manhattan, said the next time a strong El Niño occurs, it is likely to blow away all temperature records."

An earlier version of this article cited Washington Post reporting, but did not include quotations around the cited passage. The story has been updated to fully attribute the Washington Post's language.