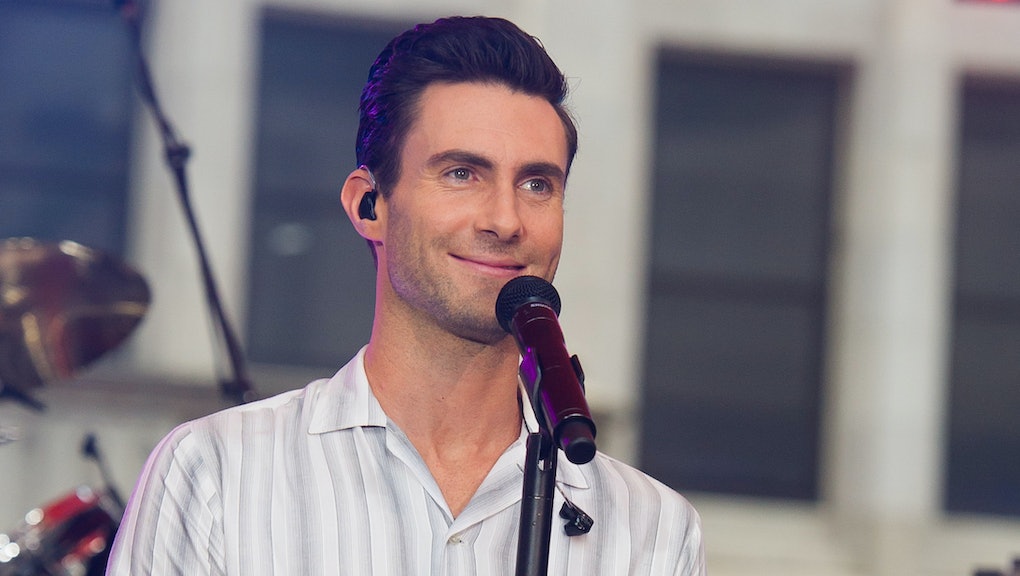 Adam Levine is a douche approximately 50% of the time. He has denied his douchery extensively, but he hasn't exactly done himself any favors either. People who can't stand him often point to times like when he told Details magazine, "I hate flying. Know why? Because no one really understands how planes actually work." Or like when he told Details "I'll tell you what yoga is good for: fuuuucking." But those people are missing the point.

Levine may be insufferable at times, but he's actually said some really insightful things.

In a profile for GQ, writer Jessica Pressler said, "In my experience, Levine has been perfectly pleasant. Delightful, even. He is quick and witty and unfailingly polite." And if you look closely enough at what Levine is actually saying, you'll find that it's true — sometimes he's even insightful. Here are 11 times he proved that he's way more than the public gives him credit for:

"There's not a single one of my contracts that doesn't have full creative control, because if you lose creative control over things like that, then you're in big trouble."

Levine has deals with everyone under the sun — he's a judge on The Voice, he has a Kmart clothing line, a fragrance collection and of course, he's the lead singer of Maroon 5. In an era of industry-controlled pop stars, it's refreshing to hear that Levine values autonomy above money — that in all of those deals, he's insisting that he be allowed to be true to himself. It pays off too: Every time they score a hit, it's a song only they could make.

"Anyone criticizing Michael Sam for kissing the person that he loves passionately on the most exciting day of his life [is] wrong. Period."

Michael Sam was the first openly gay professional football prospect. He came out before the NFL draft, and some said his chances of being picked were lower because he's gay.  When Sam found out he had been drafted by the St. Louis Rams, a video surfaced that showed him kissing his boyfriend, and bigots came out in full force. Levine's response is common sense for lots of people, but it's great that he took advantage of his fame to encourage support for gay rights — especially given his reputation as an, er, active heterosexual man.

"I don't have much of a filter. The most important thing is to be honest and not say things because you think you have to be a certain way."

While his lack of a filter is partly what gave him the title of "douche," his belief that honesty is more important than conformity is honorable. When tabloids hound Levine to slip up, at least he's comfortable enough in his own skin to own his mistakes. This is what makes him compelling — if he were totally controlled all the time, you can bet that his art would suffer.

"Part of being a TRUE champion is not running away at the first sign of trouble."

In an interview with Jon Stewart, Levine revealed that he's been playing with three of the six members of Maroon 5 since he was 12. Their first band, Kara's Flowers, was signed to Reprise Records, but the record dropped the band shortly after they were signed, and they nearly broke up. "We were shitty," Levine told GQ. "We were like a shitty version of Weezer, you know, trying to be alternative radio." They spent a while after their album flopped trying to figure out what worked for them. When they found their hit sound, a lot of musicians in their scene scorned them for being poppy. But they were sure of themselves. In 2000, the guys started over again with a new name, Maroon 5, and went on to earn three Grammys.

"I don't date what the person does. I date the fucking person. You know what I mean? I could have been a zitty teenager and walked into a Tower Records, and we would have talked about Pearl Jam, and we would have fallen in love when we were 15."

Levine is referring to his Victoria's Secret model wife, Behati Prinsloo. Carson Daly once said, "He's dated the entire Victoria's Secret catalogue!" And it's possibly true — he's rumored to have dated Lindsay Lohan, Kirsten Dunst, Maria Sharapova and Paris Hilton too. But so what? He was just looking for love — he married Prinsloo last summer, and finally set the record straight in GQ. It isn't about the job or the measurements; you love a person.

"GO OUTSIDE AND PLAY. LEAVE YOUR PHONE INSIDE."

This one is pretty simple, but it demonstrates Levine's awareness of his fans' demographic (still young) and also his sense, no matter how playful, of responsibility for them. Cellphones have been proven to negatively affect emotions, increase stress, illness and chronic pain and cause seeing problems. It's a small point, but it's one that Levine, in all his carefree glory, is especially suited to make.

"Do I really have moves like Jagger? Fucking A, no, I don't. But I was going to tell everybody that I did and hoped they believed me."

Maroon 5's ubiquitous "Moves Like Jagger" hit No. 1 on the charts in 2011 and stayed there for 28 weeks. Mick Jagger responded to song by saying, "It's very catchy. I could say I wish I had written it, but wouldn't that be weird? Only thing is, it puts a bit of pressure on me when I go out dancing!" Levine obviously gets that Jagger is a bigger deal than he'll ever be, and scores modesty points in the process. He also proves that anybody who accused him of being douchey based on the comparison was just missing the point.

"I'd rather be loud and misunderstood than quiet and bored."

In his interview with GQ, Levine said, "Would it be really easy to assume that I was a douchebag? Definitely. One hundred percent. But that doesn't mean that I am." The guy is clearly having a good time and enjoying life. In the words of Billy Joel, "I'd rather laugh with the sinners than cry with the saints." He lives by his own lights — he won't be dominated by fame.

"Every day, every single day, at some point, I think to myself, this is so great. It's so much fun."

Some celebrities just have such a hard life. Gwyneth Paltrow, in all her glorious wisdom, told E!, "It's much harder for me ... I think to have a regular job and be a mom is not as [hard]."

That sort of thing only rings false — any lifestyle has its ups and downs, and only narcissists would assume that fame is harder than other lifestyles. Levine appreciates his fame and loves what he does, and he doesn't try to convince his fans that he's just like them, a rarity in an era of megalomaniacal mega-stars.

"I'm fiercely independent, but I'm also terrified of being alone."

He may come off as the most confident man alive — he was, after all, once crowned People's Sexiest Man Alive. But it turns out he's a mere mortal just like the rest of us. His self-awareness is part of his saving grace. Levine is bold in everything he does, including his glaring mistakes and his fierce self-assessments.

Then again, he is sort of like the rest of us.