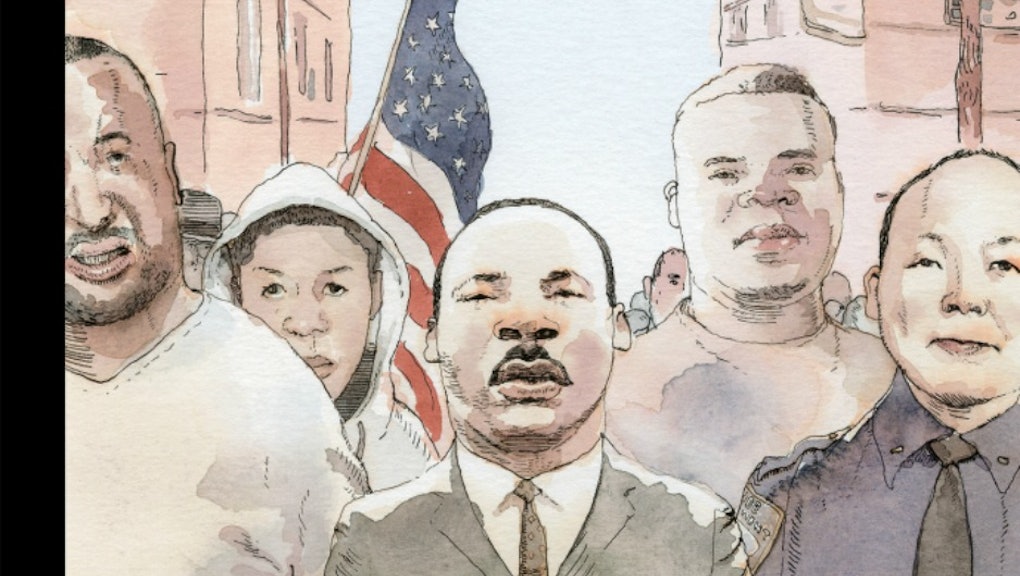 As the country moves into a new year, the visibility of the #BlackLivesMatter movement has begun to fade.

The cover features Martin Luther King Jr. walking arm-in-arm down a nameless American street with Eric Garner, Trayvon Martin, Michael Brown and what appears to be Wenjian Liu, the New York City police officer shot to death while he and his partner sat in their patrol car in Brooklyn in December.

Artist Barry Blitt, who drew the cover, said he was inspired by the photographs of the Selma-to-Montgomery march.

In New York and elsewhere, the tension between the police and the policed is at the center of things. Like Trayvon Martin and Eric Garner, Michael Brown and Officers Wenjian Liu and Rafael Ramos, Martin Luther King was taken way too early. It is hard to believe things would have got as bad as they are if he were still around today.

The message could be interpreted as a reminder that the struggle for racial equality did not die with King, but the inclusion of Liu makes this less about the African-American community and more about the damaging impact racial discrimination and tensions have on Americans from all walks of life. Liu, after all, was shot by Ismaaiyl Abdullah Brinsley, reportedly as retribution for the recent deaths of Michael Brown and Eric Garner.