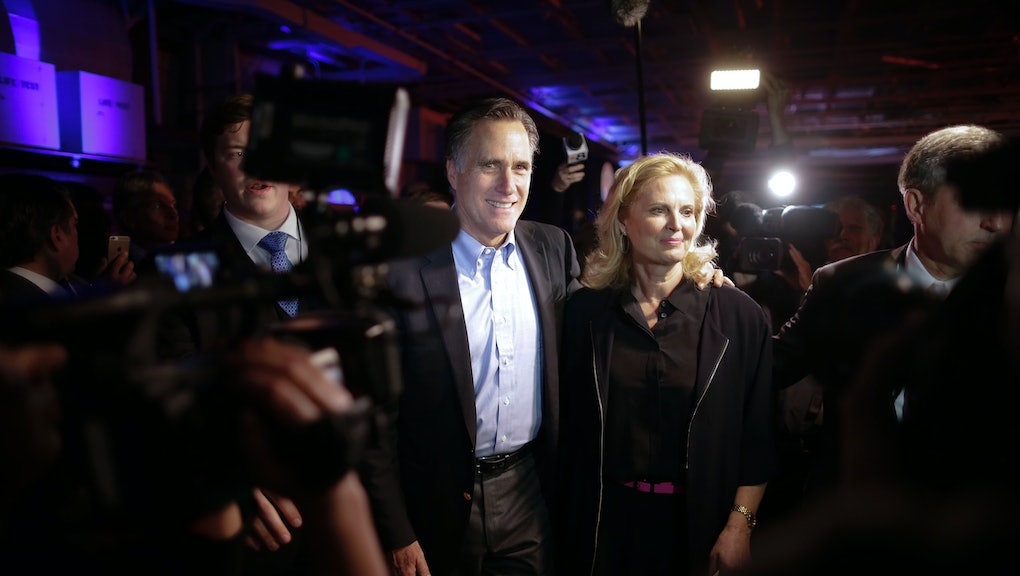 In One Speech, Mitt Romney Lays Out Why He Thinks He Could Win in 2016

In a teasing Friday night speech at the Republican National Committee winter meeting in San Diego, Mitt Romney not only kept the door to a third presidential run open — he seemed to slip a few toes right over the threshold.

"Me, I'm giving some serious consideration to my future," Romney told the dinner crowd gathered aboard the USS Midway Aircraft Carrier. It was one in a series of references to the interest surrounding his future plans. Earlier, speaking about wife, Ann, Romney said, "She believes that people get better with experience, and heaven knows I have experience running for president."

The 2012 Republican presidential nominee also spoke seriously about the political challenges facing Republicans (all of them, sure, but maybe with a little extra focus on the guy at the podium) in 2016.

"It's a tragedy, a human tragedy, that the middle class doesn't believe the future will be brighter than the past," he said to applause, moments after declaring "the results of the Hillary Clinton-Barack Obama foreign policy have been devastating," and the administration's fight against global terrorism a failure.

Then it was on to poverty. In 2012, Romney said he was "not concerned about the very poor" because "we have a safety net there. If it needs repair, I'll fix it." He was, rightfully or not, skewered. This time around, the political scuttlebutt has been that Romney would make fighting poverty a big part of a potential campaign.

And, true to form, there it was in his speech Friday night.

"We are an abundant nation," he said. "We have to lift people out poverty."

Nearly every word he spoke could be matched with details from the anonymously sourced reports on what a Romney 2016 campaign would sound like. Speaking to reporters after his talk, the once and maybe future candidate didn't backtrack a bit.

"I'm thinking," Romney told the Washington Post, "thinking about it, giving it consideration."

And Twitter was considering Romney right back. In a mark of just how serious the speculation has become, rigorous reporters, bored bloggers and political loyalists joined together to weigh in on his every word: