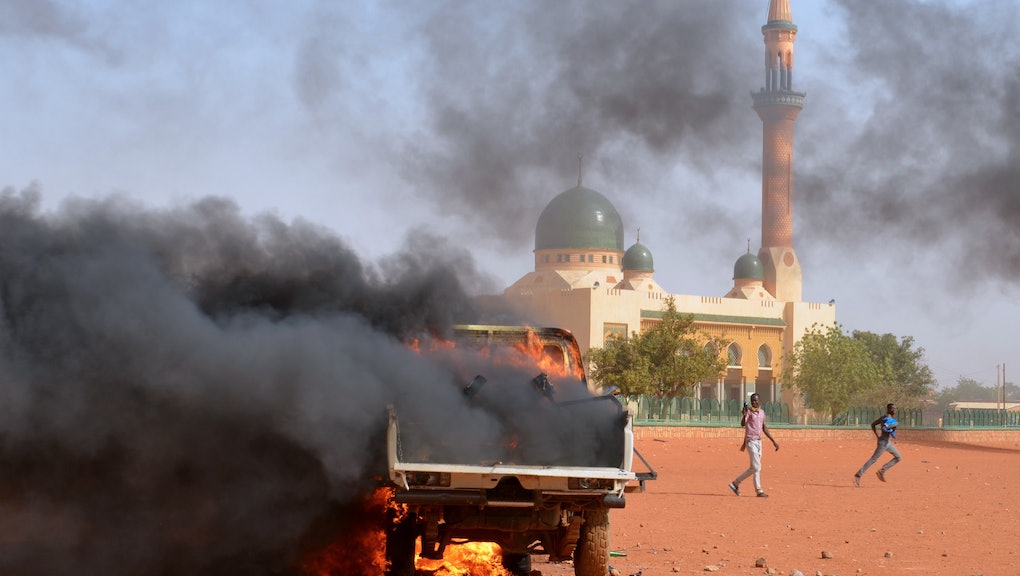 At least two churches were torched in Niger's capital on Saturday as protests raged on against the publication of a cartoon depicting the Islamic Prophet Muhammad by French satirical weekly Charlie Hebdo.

Charlie Hebdo published a new image of Muhammad on Wednesday, one week after masked gunmen stormed the satirical newspaper's offices in downtown Paris and murdered 12, including two police officers.

The death toll from Friday's clashes in Niger's second largest city of Zinder rose to five after emergency services discovered a burned body inside a Catholic Church.

The Agence France-Presse reported that police fired tear gas to disperse 1,000 youths in front of the city's grand mosque, while protesters in several parts of the city were armed with iron bars and clubs. "France's embassy in Niamey warned French citizens to stay indoors after rioters also ransacked several French-linked businesses," the Local reported.

Protests against the satirical weekly's depiction of Muhammad broke out in countries around the world, including Yemen, Sudan, Pakistan, Jordan, Syria, Lebanon and the Gaza Strip. In Somalia, students carried signs declaring "Je Suis Muslim, and I love my prophet."

"We've supported these countries in the fight against terrorism," Hollande said during a visit to the city of Tulle. "I still want to express my solidarity, but at the same time France has principles and values — in particular, freedom of expression."

An earlier version of this article cited and linked to Reuters, but did not include quotations around the phrases "a day after five people were killed in Niger in protests over the cartoons, protesters in Niamey attacked a police station and burned at least two police cars near the main mosque after authorities banned a meeting called by local Muslim leaders" or "the death toll from Friday's clashes in Niger's second largest city of Zinder rose to five after emergency services discovered a burned body inside a Catholic Church. Residents said churches were burned, Christian homes looted and the French cultural centre attacked." The story has been updated to fully attribute Reuters' language.

An earlier version of this article failed to cite a passage from the Local in accordance with Mic editorial standards. The article has been updated to properly attribute the language to the Local.