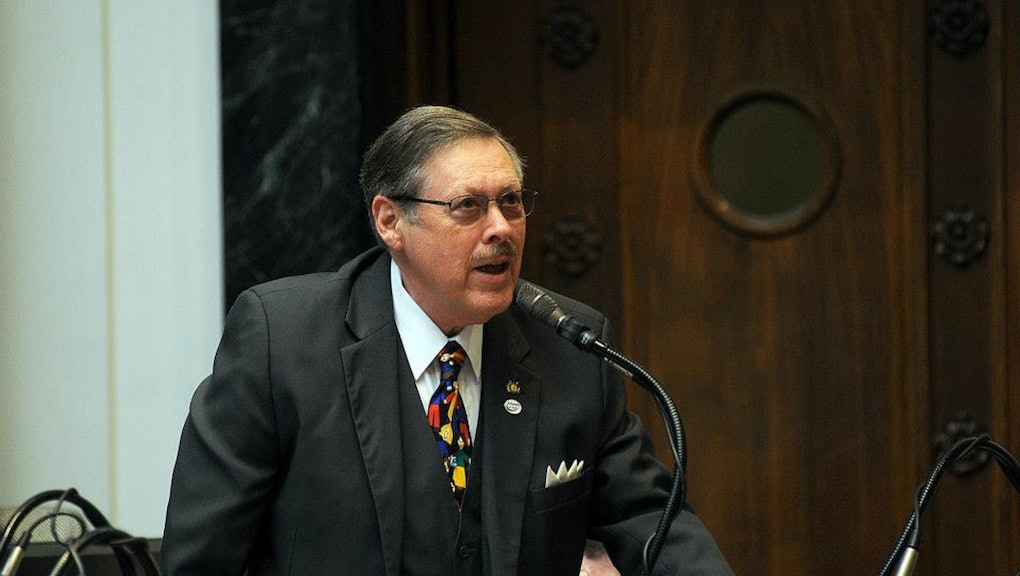 It's apparently not enough for some Kentucky Republicans that transgender people are discriminated against by ignorant private citizens. So one brave bigot has decided to take the fight against social progress to a dehumanizing low by imposing $2,500 fines on schools that allow transgender students to select which gender bathroom they'll use.

The law: Sen. C.B. Embry Jr., (R-Ky.) has introduced the Kentucky Student Privacy Act to prevent schools from providing a safe place for transgender individuals to use the bathroom in peace. The bill requires students to be categorized according to their "biological sex" as determined by their chromosomes and anatomy at birth, and requires schools to divide locker rooms and bathrooms into male- and female-only spaces.

Transgender students would be required to use the bathroom selected for them by this process or "single-stall restrooms, access to unisex bathrooms or controlled use of faculty bathrooms, locker rooms or shower rooms."

It also allows such aggrieved students to claim damages "for all psychological, emotional and physical harm suffered" (because simply being in the presence of a transgender person is apparently traumatizing).

Finally, because this is such an urgent problem, the bill labels itself "emergency" legislation that will be enforced immediately after the governor's signature, despite the fact that there aren't any documented cases of transgender students harassing or assaulting cisgender ones in the bathroom.

Why you should care: As Salon's Jenny Kutner points out, the bill would set up a de facto bounty system on transgender students, while also forcing schools to discriminate against them or face harsh financial penalties. The law also singles transgender people out for public humiliation and overrules school policies designed to treat transgender people like human beings.

This harsh rhetoric from Embry isn't much of a surprise, given that he opposed an anti-bullying law that would have added sexual orientation and gender identity to the state's protected classes. Republicans turned up their nose at the notion of protecting LGBT students' rights even after hearing testimony from family members and friends of teens who had committed suicide after being bullied.

At the time, sponsor Rep. Mary Lou Marzian told the Lexington Herald-Leader that she was "astounded by the lack of compassion by these Republicans who claim they care about people but, obviously, they don't."

Given that transgender people face immense and well-documented levels of discrimination everywhere from employment to finding a place to live, it's disheartening that some people think it's high time that schools should pointlessly bully trans students as a matter of course.