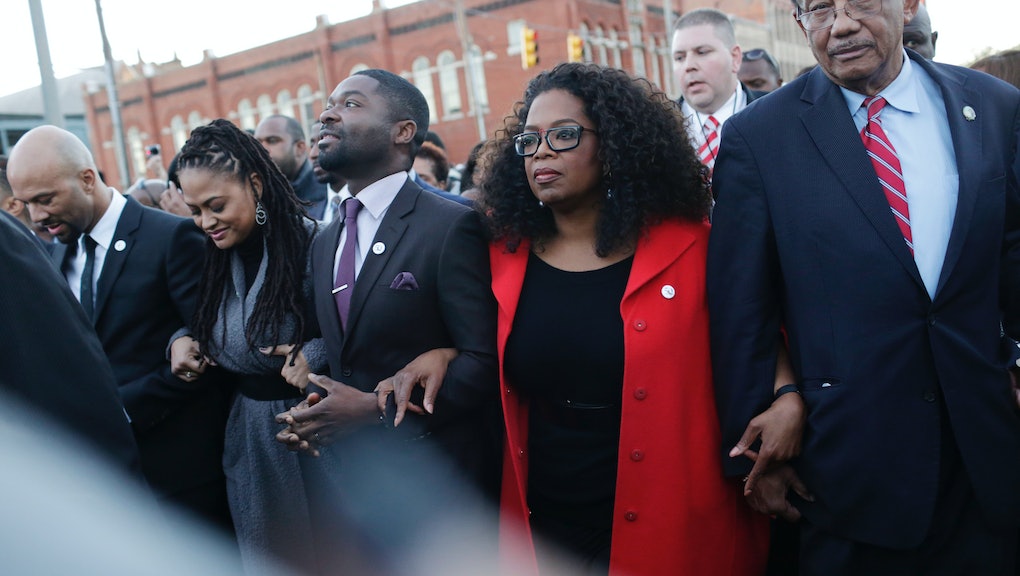 Oprah Winfrey and fellow actors from the Oscar-nominated film Selma marched with hundreds in a tribute to Martin Luther King Jr. on Sunday, the Associated Press reports.

In Ferguson, Missouri, the fatal shooting of unarmed black teenager Michael Brown by a white police officer caused weeks of violent protests; leaders of the black community demanded reforms to the criminal justice system in the name of equality. A Staten Island grand jury's decision not to indict a white police officer in the choking death of an unarmed black man, just weeks later, sparked ongoing protests in major cities across the country.

"We need to be outraged when local law enforcement and the justice system repeatedly allow young, unarmed black men to encounter police and then wind up dead with no consequences," Rep. William Clay, a St. Louis Democrat, told the Associated Press. "Not just in Ferguson, but over and over again across this country."

On Sunday, Winfrey praised the 1965 marchers for their courage in meeting fierce opposition on the Edmund Pettus Bridge in Selma.

"Look at what they were able to do with so little, and look at how we now have so much," Winfrey told the Associated Press. "If they could do that, imagine what now can be accomplished with the opportunity through social media and connection, the opportunity through understanding that absolutely we are more alike than we are different."

The Illinois Daily Herald reported that "During Sunday's march in Selma, Common and John Legend performed their Oscar-nominated song 'Glory' from the film as marchers crested the top of the bridge as the sun set. Common had a part in the movie and said that song sought to show the link between the struggle of the past and today's injustices."

"We are the ones that can change the world," Common said afterward. "It is up to us, and it takes all us — black, white, Latino, Asian, Native American, whatever nationality or religious background. There is a certain togetherness that we've got to have."

An earlier version of this article failed to cite a passage from the Daily Herald in accordance with Mic editorial standards. The article has been updated to properly attribute the language to the Daily Herald.