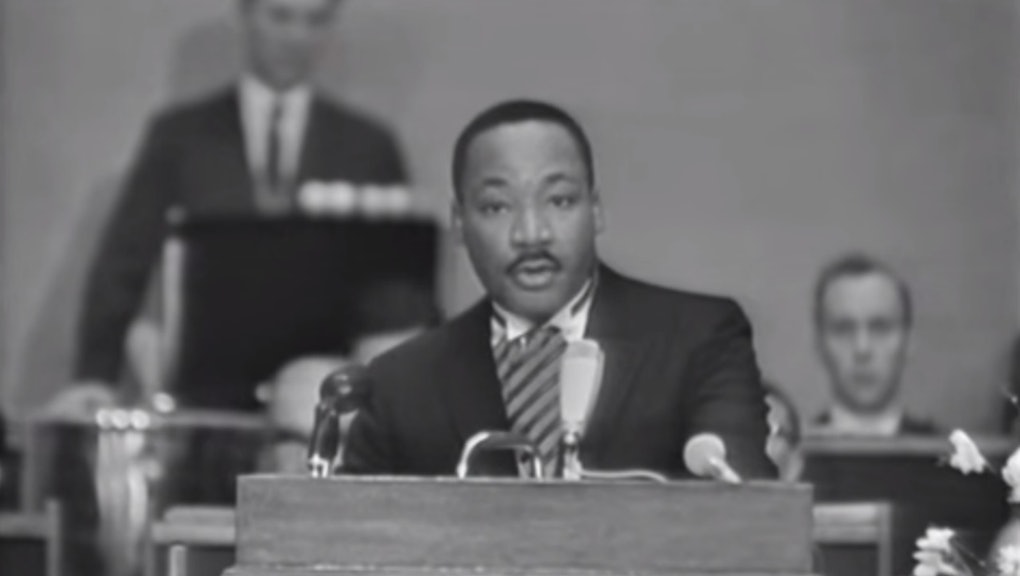 More than 50 years ago, Martin Luther King Jr. was honored by the Nobel Committee for his nonviolent campaign against racism in the United States.

"I am mindful that only yesterday in Birmingham, Alabama, our children, crying out for brotherhood, were answered with fire hoses, snarling dogs and even death," said King. "I am mindful that only yesterday in Philadelphia, Mississippi, young people seeking to secure the right to vote were brutalized and murdered. And only yesterday, more than 40 houses of worship in the state of Mississippi alone were bombed or burned because they offered a sanctuary to those who would not accept segregation. I am mindful that debilitating and grinding poverty afflicts my people and chains them to the lowest rung of the economic ladder."

King quickly concluded that his Nobel Prize is more an endorsement of nonviolence as a powerful tactic against oppression than it is a validation of success for King himself, the "answer to the crucial political and moral question of our time."

But standing before the Nobel Committee in Oslo, King saw his Peace Prize as a validation that humankind, far beyond the borders of the U.S., could abandon the vicious cycle of violence as the engine of human political and moral progress.

"I believe that unarmed truth and unconditional love will have the final word in reality," said King in Oslo. "This is why right temporarily defeated is stronger than evil triumphant. I believe that even amid today's mortar bursts and whining bullets, there is still hope for a brighter tomorrow. I believe that wounded justice, lying prostrate on the blood-flowing streets of our nations, can be lifted from this dust of shame to reign supreme among the children of men. I have the audacity to believe that people everywhere can have three meals a day for their bodies; education and culture for their minds; and dignity, equality and freedom for their spirits. I believe that what self-centered men have torn down, men other-centered can build up. I still believe that one day mankind will bow before the altars of God and be crowned triumphant over war and bloodshed, and nonviolent redemptive good will proclaim the rule of the land."

This article was originally published on Jan. 19, 2015