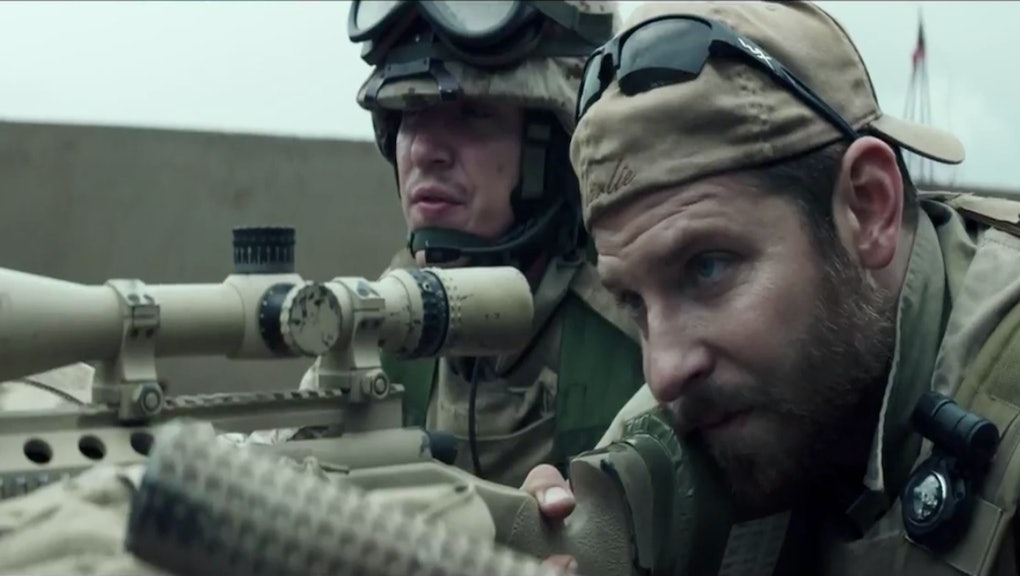 By all accounts, American Sniper had a great week. The film earned six Oscar nominations, smashed box office records (earning an estimated $90.2 million in ticket sales over the weekend) and has largely inspired critical praise.

But the Bradley Cooper vehicle is also getting positive feedback for all the wrong reasons:

Plenty of critics have raised issue with this film's premise and the portrayal of the film's subject: Chris Kyle, a U.S. Navy SEAL who was deployed to Iraq in 2003 and claimed to have killed more than 255 people during his six years abroad. Apart from the movie's violent premise, many questioned the troubling strains of Islamophobia running through Kyle's memoir, on which the film is based. Kyle writes about fighting "savage, despicable evil" in Iraq, observing that "I only wish I had killed more" and even describing "killing so many people in Iraq" as "fun" — statements and sentiments that, as part of the movie's source material, are impossible to ignore.

Portraying Kyle as a heroic protagonist further encourages viewers to valorize his violent legacy and problematic ideologies. Michael Atkinson of In These Times writes that while Kyle's story is "a tragedy in terms of his soulless patriotic skill at killing Arabs, his manipulated and common dimness about why the war happened at all, and the emotional damage he incurred," Clint Eastwood fails to direct the film to reflect this characterization.

Lindy West was kinder to the film  in her analysis, noting in the Guardian that while Sniper is "morally ambiguous [and] emotionally complex" many viewers simply haven't grasped and grappled with this wartime ambiguity, instead treating the film with "unconsidered, rah-rah reverence." She says that they have flattened the film "into a symbol to serve the interests of an ideology that, arguably, runs counter to the ethos of the film itself."

While these tweets may not represent every viewer's lasting impression of the film, they underscore critics' warnings that valorizing anti-Muslim rhetoric and violence can easily be misinterpreted in a pernicious way that has lasting effects on society. It doesn't help that the film premiered in the wake of the Charlie Hebdo massacre, while anti-Muslim tensions have arguably been internationally augmented.

In some senses, the debate over 'American Sniper' has made the film the official Oscar nominee of America's culture wars. But such misguided and horrifying reactions to American Sniper should serve as a salient reminder of the power of narrative media. The way we depict already marginalized groups in the media has very real, lasting effects on American attitudes and beliefs. We must hold ourselves to a higher standard.