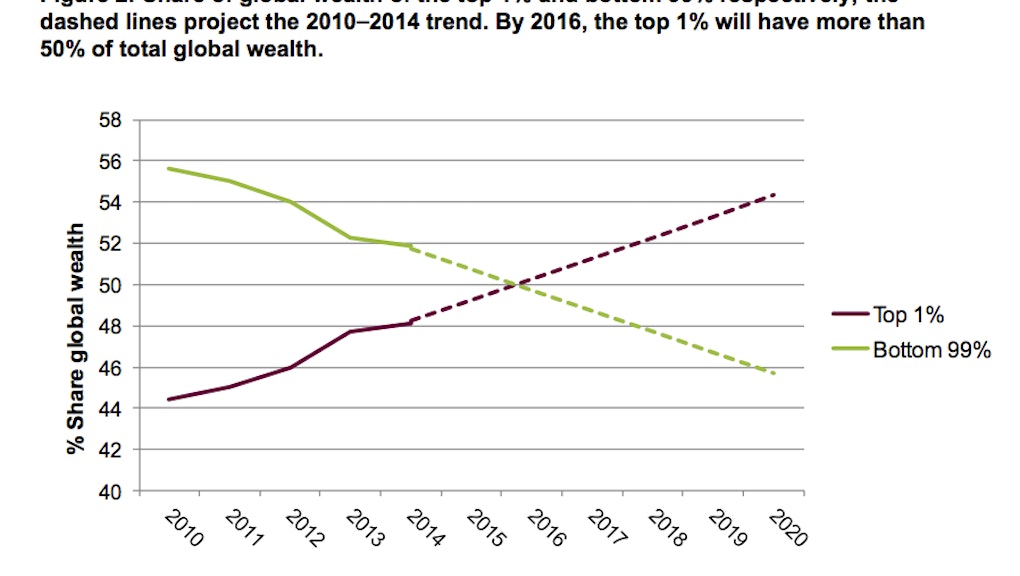 The rich keep getting richer.

More than half the world's wealth will be owned by just 1% of the population by 2016 as wealth inequality soars, international anti-poverty charity Oxfam announced Monday in a report.

Released ahead of this week's annual meeting of global political and economic elites in Davos, Switzerland, the report says the top tier had seen their share of wealth increase from 44% in 2009 to 48% percent in 2014, on track to exceed 50% percent in 2016.

The concentration of wealth in the hands of a few international economic elites is holding back the fight against poverty, according to Oxfam.

"Do we really want to live in a world where the 1% own more than the rest of us combined?" said Oxfam executive director Winnie Byanyima, co-chair of the World Economic Forum meeting in Davos. "Business as usual for the elite isn't a cost-free option. Failure to tackle inequality will set the fight against poverty back decades. The poor are hurt twice by rising inequality — they get a smaller share of the economic pie and because extreme inequality hurts growth, there is less pie to be shared around."

She's right . While every person on the planet felt the economic effects of the financial crisis of 2008, the Oxfram report shows that it's primarily the world's wealthy who have benefitted from economic recovery since then — and those gains don't necessarily improve the well-being of the global economy.

According to the report, the richest 80 people in the world had a net wealth of $1.3 trillion in 2010; by 2014, their wealth increased by $600 billion to $1.9 trillion, a 50% increase in nominal terms. But while the total wealth of the poorest half of the world increased by more or less at the same rate as that of billionaires between 2002 and 2010, their wealth has been collectively on the decline since 2010.

This disparity has repercussions beyond wealth: They also reflect the growing influence of financial and business elites on public policy that could be used to stamp out social ills like poverty. According to Oxfam, this is partially thanks to the inordinate political influence deployed by business and financial elites to preserve their interests. The richer political elites become, the easier it becomes to maintain that economic power.

"While corporations from the finance and insurance sectors spend their resources on lobbying to pursue their own interests, and as a result go on to increase their profits and the associated wealth of those individuals involved in the sector, ordinary people continue to pay the price of the global financial crisis," the report says.

"The cost to the U.S. taxpayer of the bailout of the financial sector was calculated to be $21 billion. While the financial sector has recovered well as a result of this bailout, median income levels in the USA are yet to return to their pre-crisis levels. The ongoing cost to the taxpayer for 'systematically important financial institutions' — in other words those that are too big to fail — has been estimated by the IMF to be $83 billion every year."

Meanwhile, one in nine people around the world don't have enough to eat and more than a billion people live on less than $1.25 a day, the Washington Post reports.

"The most prolific lobbying activities in the U.S. are on budget and tax issues," the report says. "Public resources that should be directed to benefit the whole population, rather than reflect the interests of powerful lobbyists."