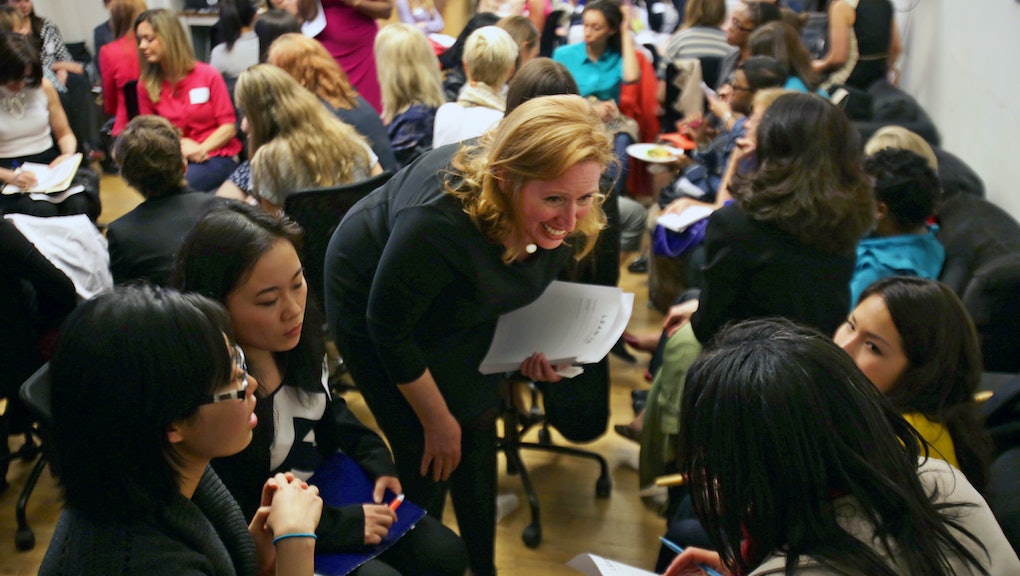 It's Not Smart People Who Build Successful Organizations — It's Smart Women

Teamwork can be the worst. There are differences in skills, silly group politics and the dreaded specter of meetings on top of meetings that can make group work both inefficient and exhausting.

But a group of researchers believe they've found the key to harnessing organizational power and creating smarter, more effective teams. A team of MIT researchers led by Carnegie Mellon professor Anita Woolley set out to with a simple task: to unravel why some groups are simply smarter and better than others.

The study: Starting in 2010, Woolley and her team conducted two studies in which 699 people were divided into groups of two to five people and given IQ tests and various tasks to complete. These tasks, Woolley writes in the New York Times, were meant to replicate assignments that might be given to groups in the "real world." They included logical analysis and brainstorming exercises and emphasized skills such as "coordination, planning and moral reasoning."

The researchers found that, despite popular assumptions, the smartest groups are not derived from group members' average intelligence or from the level of intelligence of the smartest person in a group but rather multiple, arguably unexpected factors.

Collective intelligence, the researchers write in the study, is "strongly correlated with the average social sensitivity of group members, the equality in distribution of conversational turn-taking, and the proportion of females in the group."

The researchers elaborated on these findings in the New York Times, noting that the individual IQ tests revealed that "teams with higher average IQs didn't score much higher on our collective intelligence tasks than did teams with lower average IQs." The tasks demonstrated that smart groups are composed of members that "contributed more equally to the team's discussions" and scored higher on a test that "measures how well people can read complex emotional states" from only viewing the eyes of a given face.

These findings suggest that collective intelligence, therefore, may not be related to intelligence or even gender a priori. Rather, as Derek Thompson noted in the Atlantic, it's women's specific, proven ability to score higher on metrics of emotional intelligence, such as reading nonverbal cues of their teammates, that results in teams with more women being smarter. While researchers did find that the smartest groups had quantifiably more women, they similarly attributed this finding to the fact that "women, on average, were better at 'mindreading' than men."

Why it matters: This research isn't just about gender: It offers support for the power and intelligence of employing empathy in an increasingly technologized world seen as disassociated from emotion. As Thompson writes, the study suggests that "emotionally sensitive people are gifted at reading between the lines, whether the literal lines are brow wrinkles or text messages."

More broadly, though, given that women are still woefully under-represented in many fields, like finance and tech, for example, these findings should bolster calls for greater gender diversity in professions across the board. Companies that continue to rely on groups solely comprised men to devise strategies and make major decisions, according to this research, are putting themselves at a disadvantage.