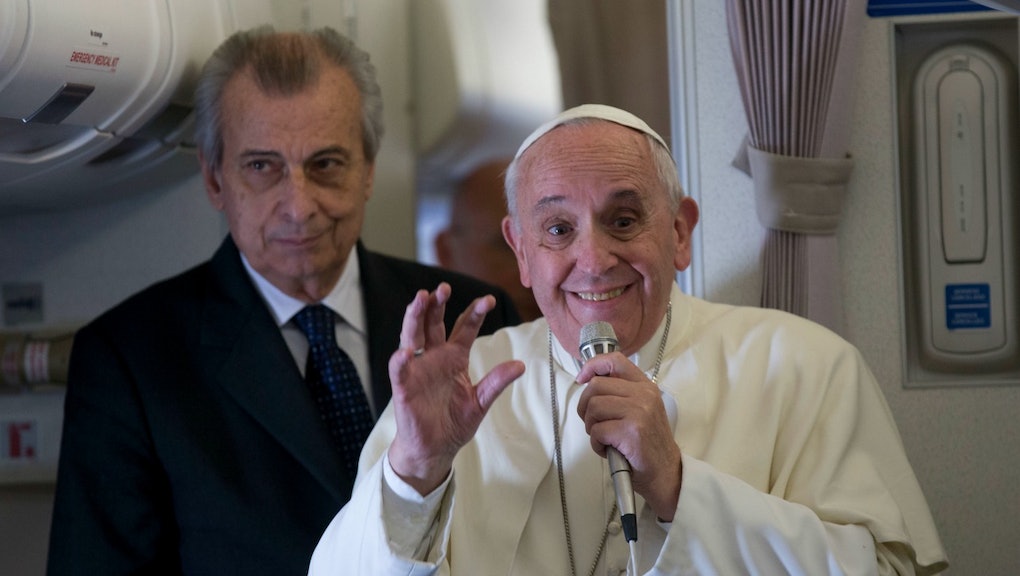 Pope Francis on Birth Control: Catholics Don't Have to Breed "Like Rabbits"

In defending the Catholic Church's ban on contraception, Pope Francis said Monday that Catholics don't have to breed "like rabbits" and should instead practice "responsible parenting."

Speaking en route home from the Philippines, where the pontiff drew a record crowd of up to 7 million Catholics, Francis said that it's not true that to be a good Catholic "you have to be like rabbits," urging that "responsible parenthood" requires that couples regulate the births of their children, as church teaching allows.

"The freewheeling encounters have become a hallmark of Francis's simple style, his penchant for straight talk and his ease at using colloquialisms to make his point," Reuters notes. "Speaking about corruption, he disclosed that, in his native Argentina in 1994, he almost kicked two government bureaucrats 'where the sun doesn't shine' after they tried to involve him in a kickback scheme."

But despite Francis' somewhat humorous remarks — which many birth control advocates may see as a wink and a nod to data that shows a connection between abstinence-only education and high pregnancy rates — the pontiff also delivered his strongest defense yet of the 1968 encyclical Humanae Vitae, which enshrined the church's opposition to artificial birth control.

This new language may seem contradictory to fans of Cool Pope: In 2013, Pope Francis called on his followers to abandon their full-throated "obsession" with social issues like homosexuality, contraception and abortion in his first interview after becoming pontiff.

"It is not necessary to talk about these issues all the time," Pope Francis said at the time. "We have to find a new balance otherwise even the moral edifice of the church is likely to fall like a house of cards, losing the freshness and fragrance of the gospel."

But the Vatican hasn't necessarily abandoned its position. Francis told Italian newspaper Corriere della Sera in March 2014 that the Vatican's teachings on contraception does not need to change.

"The object is not to change the doctrine, but it is a matter of going into the issue in depth and to ensure that the pastoral ministry takes into account the situations of each person and what that person can do," Francis said.