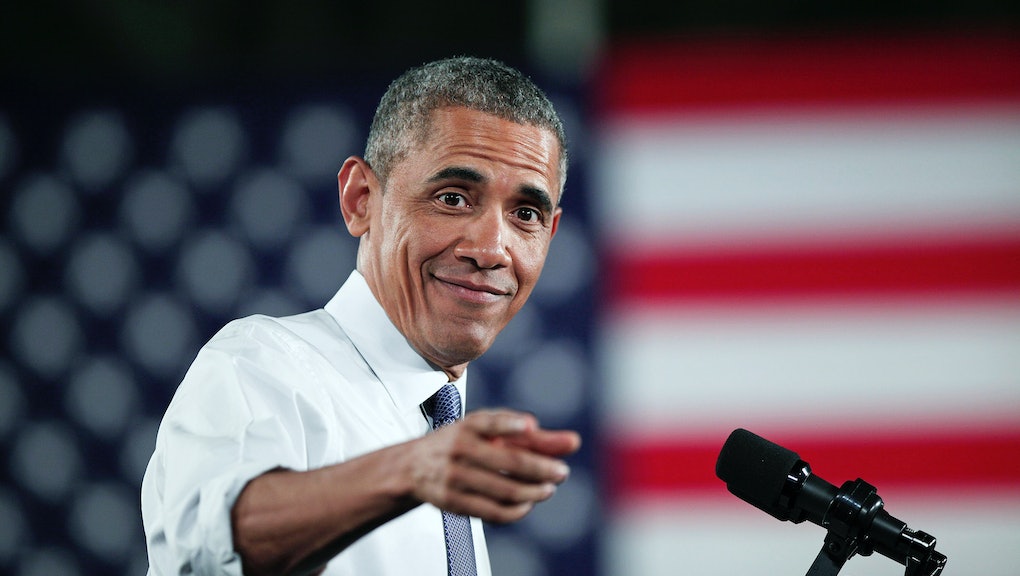 Amid news of improving economic conditions and a rising job approval rating, President Barack Obama will deliver his annual State of the Union address in Washington, D.C., on Tuesday night. He'll present a host of ideas that could have a real impact on the lives of young Americans. On the menu: a plan to make two years of community college free for most students and a tax proposal that would offer relief to the middle class while raising taxes on the wealthy. And that's just the beginning.

By the time Obama leaves the podium, political operatives will be deep in their spin cycles while cable news analysts get busy plucking away at the president's every turn of phrase. So we thought it would be wise to get ahead of the rabble and ask a smart, influential, young group of students, policy leaders, writers and activists what they want to hear from the president before his big address.

From income inequality to suicide prevention and police violence, their recommendations were as diverse as the issues facing the White House as it enters the final two years of the Obama administration. Here's what 14 young Americans want to hear at tonight's State of the Union:

"I'm looking forward to hearing the President's vision for restoring opportunity — and the chance for a better future — for working families in Ohio and across the nation. Whether it's raising the minimum wage, ensuring equal pay for equal work, making college more affordable or investing in the clean energy jobs that will keep our economy competitive in the future, it's time to take bold action to strengthen the middle class. That's what I'd like to see from the White House — and from Congress — in the coming year."

2. Dawud Walid, lecturer on the Islamic faith and executive director of the Michigan chapter of the Council on American-Islamic Relations

"I would like to hear President Obama commit to supporting the introduction of legislation that protects communities of color from racial and religious profiling by law enforcement. The passing of the End Racial Profiling Act (ERPA) would a good remedy. Given the #BlackLivesMatter movement, I don't see how he could ignore this issue in his speech."

"As we approach the 50th anniversary of the most powerful piece of civil rights legislation, it is critical that our leaders work together to restore the Voting Rights Act and protect the rights of young people and minorities to vote. The exclusion of eligible citizens in the American electoral system is one of the most serious and dangerous problems facing our democracy.

"Millennials are the largest and most diverse generation in our country — defined by our optimism; commitment to equality and justice; and entrepreneurial spirit. We are looking for practical solutions to issues we care about — from job creation and economic growth to student debt and the environment. Young people need to hear from our leaders in the White House and Congress their plans to work together to move this country forward."

"Suicide is the second leading cause of death among college students. President Obama has been a good champion for students, and we need him to engage with campus leaders more to shape programs that address mental health, student finances and campus sexual assault policy. It's On Us is a tremendous model to build from."

"In December of 2014, President Barack Obama signed H.R. 1447 — the Death In Custody Act. As Mic reported, the new law requires that all law enforcement agencies in this country report statistics on the police shootings and deaths that occur at their hands. The bill was signed with very little notoriety or media attention despite the fact that, in our country, we have no idea how many people are killed by police officers each year.

"Absent this law, individual police departments aren't required to report to the federal government how many times their officers use deadly force or how often individuals die in their custody. There are around 17,000 law enforcement agencies in this country. According to the Washington Post, approximately 750 of those actually self-report the amount of times deadly force is used by their officers. Since 2008, those 750 law enforcement agencies reported killing around 400 civilians per year. When you consider that there are over 16,000 agencies whose data is not reflected in the reporting — the true number could be frighteningly astronomical.

"At this year's state of the union, I would love to see our President champion this law — first as another necessary step toward building our more perfect union, but more importantly as an affirmation of the importance of the #BlackLivesMatter movement. Young black men are 21 times more likely to be killed by police than their white counterparts. Sobering statistics like that, in the wake of the deaths of Aiyana Stanley-Jones, Yvette Smith, Mike Brown, Eric Garner, Tamir Rice and quite literally countless others, have lead to the most consistent and sustained movement for social justice this nation has seen since the Civil Rights Movement of the 1960s.

"On March 15, 1965, President Lyndon Baines Johnson hailed the passage of the Voting Rights Act in one of the most famous speeches any president has ever given. Echoing the chorus of activists all across America, LBJ told congress and the country, that "we shall overcome." What a moment it would be if almost 50 years to the day of that speech, our first black president showed the moral fortitude to similarly echo the chorus of activists across the country by telling our nation — with all the power and authority his office holds — that black lives matter."

7. Karie Cross, Ph.D. student at the Kroc Institute for Peace Studies at the University of Notre Dame

"What I would most like to see in the State of the Union is some courageous moral leadership on two of the toughest ethical issues of today: race relations within the U.S. and violent political extremism. I have been largely disappointed with Obama's response to protests in Ferguson, New York and other places, and he needs to take a strong stand on behalf of improving citizen/police relations and addressing systemic disparities among Americans.

"I also hope that Obama will honor and work to protect not only the lives of Western journalists at Charlie Hebdo, but also the lives of civilians facing groups like Boko Haram. The U.S. can and should be an important leader of multilateral action against extremism, and it needs to do this in a way that respects religious and minority communities. I hope very much that Obama's speech, and the actions that follow, will privilege justice and sensitivity to difference over political expediency."

"One thing I'd like to see Obama address tomorrow is income inequality. Specifically I'd like to see him suggest measures to raise the minimum wage and target the structural discrimination that perpetuates gender and race-based wage gaps. We live in a country where 40% of households with children under 18 include women who are the sole or primary breadwinners — 63% of whom are single moms. Yet the gender wage gap has hardly shifted in the last 10 years. And that wage inequality hits women of color especially hard, with Hispanic and Latina women earning just 54% of what white men did in 2013 and African-American women just 64%. Change is long overdue."

"It's been over two years since the shooting at Sandy Hook Elementary School in Newtown, CT, where twenty children and six staff members were gunned down in cold blood. In 25 months since, Congress has yet to pass a single piece of legislation that would prevent a similar shooting from happening. Everytown.org reports that nearly 100 school shootings have occurred since Sandy Hook Elementary, and yet Congress has done nothing on the issue.

"The president has urged Congress on several occasions to send him a bill that would increase gun safety for communities across the country. I think the American people would welcome another call to action and for the new majority in the House and Senate to demonstrate leadership."

"I want to be assured that the government is focused on technology in every possible way with every possible resource. I want to know we have programs and people in place — the best and the brightest —concentrated on averting cyber attacks, finding new ways to help the neediest among us, regulating industries that need oversight, cutting down on bureaucracy for government services and enhancing transparency across the board.

I want our president to make sure that America is as prepared for change as those who would exploit change are prepared for our weaknesses. The USDS is a great start, I want to know what's next."

11. Reshma Saujani, founder and CEO of Girls Who Code

"[I] hope to see the President to commit to initiatives aimed at closing the staggering gender gap in technology. 2014 was an incredible year of progress: the president wrote his first line of code and girls across the country got a chance to light up the National Tree Lighting ceremony with code. Now, with women earning just 18% of computer science degrees, it's time for the White House to move beyond exposure and commit to long-term initiatives that will provide meaningful computer science education to girls in middle school and high school."

"I would love to see President Obama discuss compromise and willingness to work with congressional Republicans on forging legislation that both sides can agree on. For example, he could work, like his Democratic predecessor Bill Clinton did in 1996, to enact welfare reform that could lift millions of people out of poverty. He could also work with Congress to reform provisions in the Affordable Care Act in ways that voters want to see. Here's hoping!"

"As this has been a very difficult year for our nation, I hope that President Obama addresses the urgent need for police reform. I am encouraged by the focus President Obama has given to this important issue, however I believe he must emphasize that this problem is not just specific to Ferguson or Staten Island, but one that affects us all. The trust must be restored between police departments and the communities they serve, and it must start by reforming the policing policies that criminalize and antagonize communities of color."

"As a supporter of the president, I'd like to see him toot his own horn a bit, especially in regards to some of the positive economic trends we are currently seeing, especially the drop in unemployment. The Republicans promised so much doom and gloom if he was reelected. I think the fact that the opposite has occurred warrants some measure of gloating.

"In that same vein, I'd like to see him renew his call for a rise in the federal minimum wage. I'd also like him to address the successes of the ACA and to reaffirm his commitment to health care reform, because that's going face some serious challenges from the new congress. Foreign policy-wise, I'm interested to see what he says about ISIS. Hopefully some type of clear strategy moving forward, preferably involving plenty of cooperation with the international community and our allies.

"Finally, it's always nice when we public educators get a shout out, though on the whole I think this administration's policies have been only slightly less misguided than its predecessors. I can't really pinpoint what I'd hope to hear him say regarding education, but I'm interested to see if he will address the achievement gaps that still exist here in the U.S. and those between our system and those of many other industrialized nations."