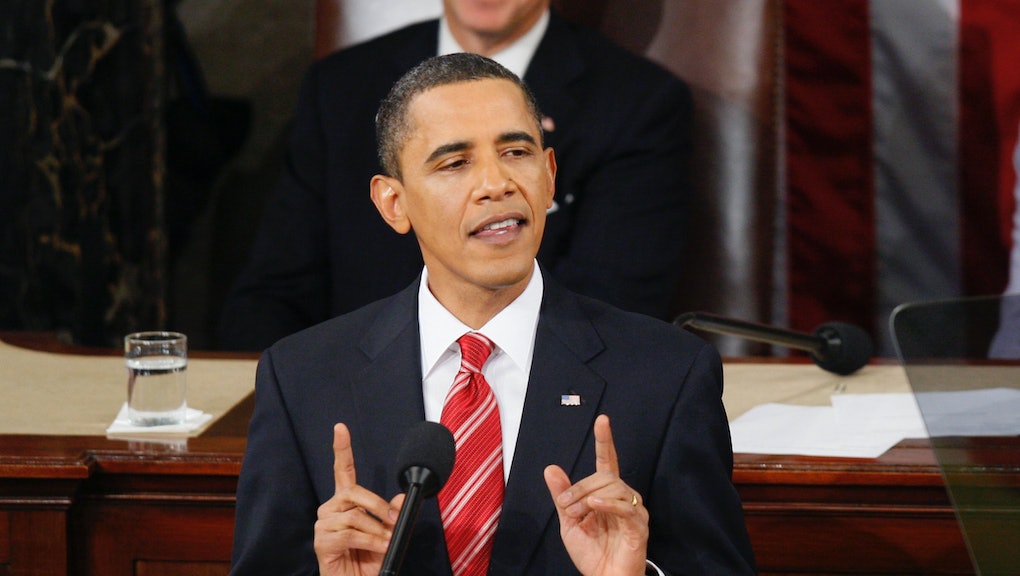 How Obama's State of the Union Has Evolved Over the Years, Visualized

Tuesday's State of the Union will set the tone for the critical legacy-building phase of Barack Obama's presidency as he enters his last two years in office.

The speech will signal strategic priorities in Washington's new landscape, as the Republicans now have firm control over both chambers of Congress. Obama's remaining time in the White House is likely to be centered on using executive actions to act unilaterally when he can, and working with the Democrats to angle for a populist renewal — at least rhetorically — in the run-up to 2016.

The message that Obama lays out on Tuesday is likely to sound significantly different from past addresses, which always serve as opportunities to shift gears on policy and messaging priorities. The public policy consulting firm Hamilton Place Strategies has put together a fascinating report on Obama's previous six State of the Union speeches that discerned trends in these priorities.

Their findings on the decline of financial regulation and the rise of wages and inequality as central themes are a particularly compelling reminder of how these speeches serve as a political bellwether. Here are some of the strongest takeaways from their report:

When it comes to the economy, financial reform has faded from view, and wages and inequality are in.

During Obama's first address, delivered shortly after he had entered the White House amid the worst economic crisis since the Great Depression, his discussion of the economy was centered overwhelmingly on financial regulation. Last year, by contrast, the president focused on wages and inequality as the economy continued its recovery.

This chart shows trends in Obama's economic discussion from another angle. As you can see, jobs — always an essential part of the address — have enjoyed increasing presence over the years. Another takeaway is that earlier in Obama's presidency, debt and the deficit were key topics, but their prominence has decreased since their number of mentions peaked in 2011. In the meantime, wages and inequality have grown significantly more prominent as themes.

This chart shows the most frequently used words in the last six State of the Union addresses, the top six of which are "more," "now," "new," "jobs," "people," "America" and "American." In other words, the State of the Union is about optimism, patriotism and money.

The State of the Union is predominantly about appraising domestic policy achievements, shortcomings and prospects. It's worth noting in the chart above that time devoted to foreign policy has increased over the years, largely due to the growing instability in the Middle East and Central Asia, and a discussion of how to cope with the challenges that it poses.

The economy is the centerpiece of every State of the Union.

The economy always features front and center in the State of the Union, and big picture budget priorities get the second-most attention.

Despite being the crowning policy achievement of his presidency, Obama has avoided discussing health care extensively in any address. You can see a jump in 2014 when Obama touts enrollment numbers after the Affordable Care Act's tumultuous rollout in the fall of 2013.