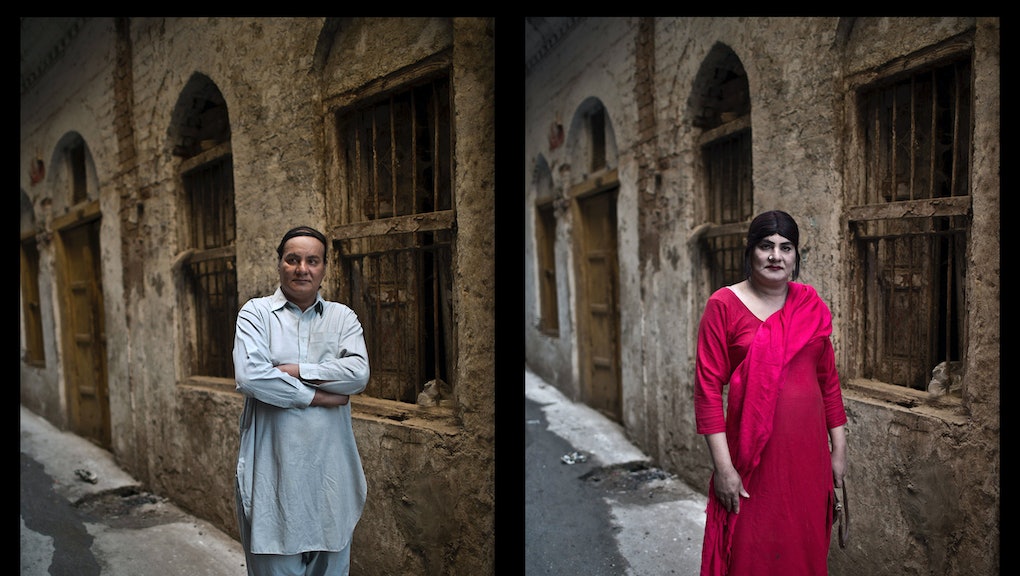 In conservative Pakistan, where religious extremists wage continuous battles against the government in the name of a strict interpretation of Islam, male cross-dressers, transgender Pakistanis and hijra individuals are often forced to choose between hiding who they are and life on the streets.

Yet at the same time, the hijra (an Urdu-Hindustani identity that roughly translates to "leaving one's tribe" and includes people who identify themselves as female, male or third gender), can trace their presence in Pakistani literature and stories to the 16th century, when eunuchs or other non-gender-normative individuals served as entertainers in the courts of the Mughal Empire. In Pakistan, the hijra are considered good luck (reflecting a belief that God more readily answers the prayers of the underprivileged) and frequently perform at weddings and baby showers as a result. A Supreme Court ruling in 2011 allows hijra Pakistanis to get identity cards recognizing them as neither male nor female, and allows them to vote. Despite this status, hijra Pakistanis continue to face discrimination.

For the first time, the world has gotten a rare look at the lives of hijra individuals living in one of South Asia's most restrictive societies. Muhammed Muheisen, chief photographer in Islamabad for the Associated Press, has spent two years photographing Pakistan's transgender, cross-dressing and hijra communities, and the results are beautiful.

Note: All names and pronouns comport with those used in the Associated Press gallery, with the exception of Amjad Mahmoud, who identifies as a transgender woman.

Bakhtawar Ijaz wears a bra under lamplight following a power outage while preparing to go out at his home in Rawalpindi.

Waseem Akram dances during a private party in Rawalpindi. By day, Akram sells mobile phone accessories from an alleyway shop. By night, he becomes Rani, a female wedding party dancer. "Being a dancer at weddings, parties and private events ... helps me earn much more money than working in a shop," Akram tells the AP.

Akram by day and by night.

Akram applies makeup on his face using natural light due to a power cut, as he prepares himself for a party at a friend's place in Rawalpindi.

Arfeen Nasar posing for a picture at his home in Rawalpindi.

Ijaz applies makeup on his face. "I am a very shy man. Eyes always follow me when I walk out of the apartment that I share with a few friends who share the same job like mine (as) dancers," he says. "Being with them is like being with a family. When I am surrounded by them, I feel safe, respected and empowered."

Amjad Mahmoud reflected in a mirror while posing for a picture at her home in Rawalpindi. Mahmoud proudly identifies as transgender. "The only thing I can't do as a woman is conceive babies," she says.

Akram plays a game with neighboring workers at a market in Rawalpindi.

Tahir Abbas poses for a picture in Rawalpindi. Many cross-dressers, trans Pakistanis and hijra leave their villages for the anonymity of a big city, fearing the reactions of their families while still concealing their identity from neighbors and co-workers.

Akram applies makeup as he prepares himself for a party at a friend's place in Rawalpindi.

Ijaz sits in front of his window combing his wig while preparing to go out.

Pictures of Pakistani hijra people are spread on the ground of an apartment shared by a group of dancers in Rawalpindi.