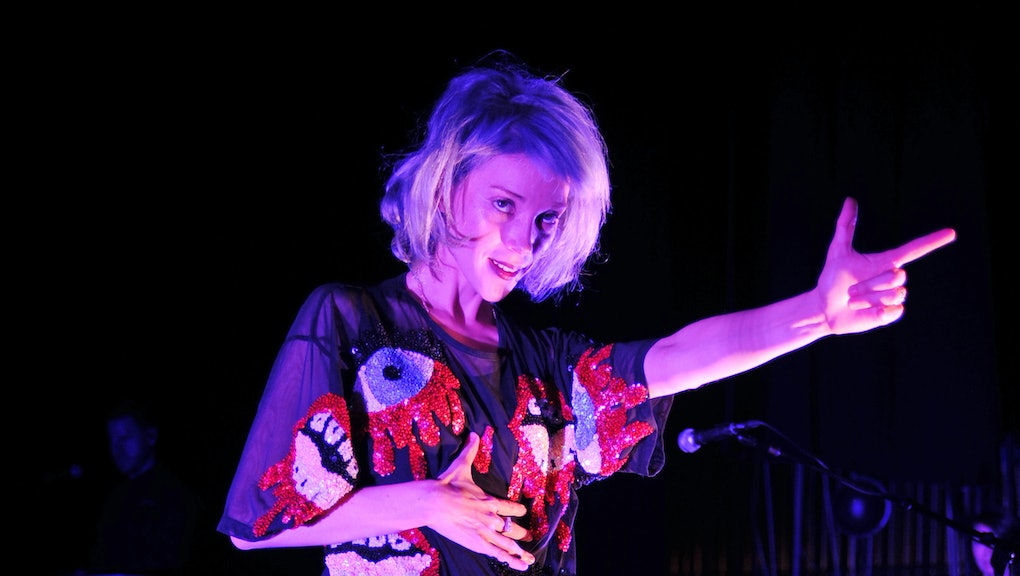 2014 was a monumental year for Annie Clark. Her self-titled fifth album, St. Vincent, was celebrated by critics, reached No. 12 on the charts and earned a Grammy nomination for Best Alternative Music Album.

Tuesday morning, Clark released a new song that reminds everyone why she's the artist we so desperately need right now. "Bad Believer" bulldozes the status quo and leaves mind-numbing pop in the dust, delving into religious iconography and posing difficult moral questions in an era of spoon-fed chart-toppers.

Here Clark waxes poetic about religion, not a new a topic to the indie queen. She started out as a member of the pseudo-religious psychedelic group the Polyphonic Spree, and went on to tour with indie-folk songwriter Sufjan Stevens, who's openly Christian but makes secular music. Christian iconography is everywhere in Clark's discography, in songs like "Jesus Saves, I Spend," "The Apocalypse Song" and "Lazarus."

But Clark has made it clear in interviews that she, like countless artists before her, uses religion as an inspiration, and not as a reflection of personal identity. In a Q&A with Flavorwire, Clark said, "I tend to draw on religious mythology because it's so ubiquitous. I'm definitely interested [in religion] in an intellectual sense."

She's also explored important topics about the state of the modern world. Her song "Digital Witness" begs for humanity's deliverance from technology; "Huey Newton" explores the extent of our disconnected society; "Prince Johnny" probes the depths of self-destruction. Without lyrics, those songs would just be strung-up notes.

Clark's new song revisits religious themes: "From the day I drove into the altar / I let my mind, my sin in the pure / Melt before the trampoline and pastor / Seen it as it touched my trembling hand / What do you know? I'm just a bad believer."

In "Bad Believer," the lyrics are more than just fodder for the dance floor. Clark's words are poetry, something the world, and popular music in particular, could use a little more of these days.

"Bad Believer" will show up on a deluxe version of St. Vincent due out Feb. 9.