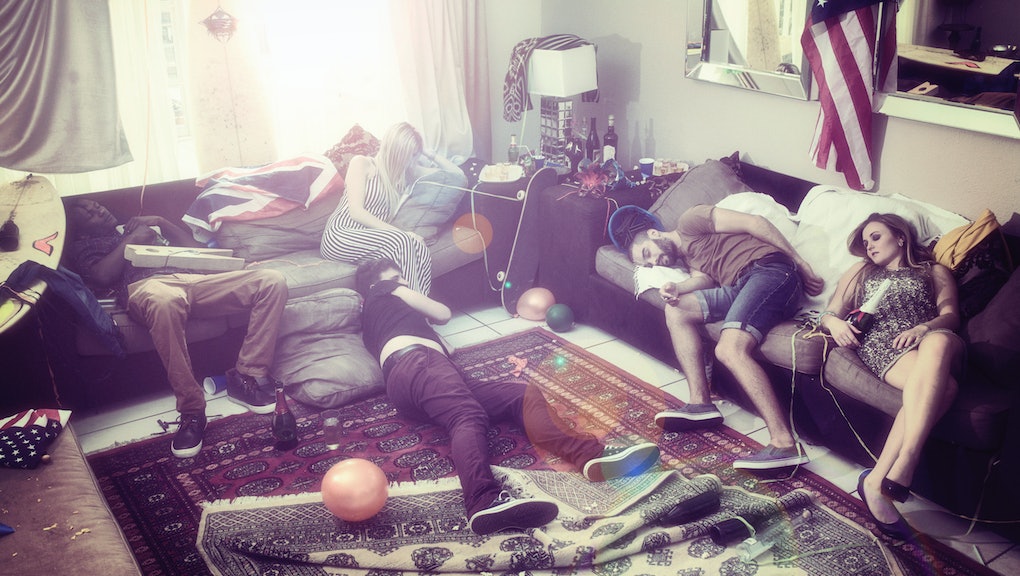 So you've decided to watch the State of the Union.

In a year without an election, President Barack Obama's live address Tuesday night to a joint session of Congress is the most compelling piece of national political drama on the calendar. Over the years, we've seen a no-name South Carolina congressman interrupt the president's speech to shout, "You lie!" We've also watched Obama shade a group of Supreme Court justices, seated front and center, over their decision to gut campaign finance reform.

But those are the outliers. Mostly, these big speeches follow a particular formula. With that in mind, we've created our own formula for keeping it all super exciting. With alcohol.

Here then are the guidelines for the Mic's 2015 State of the Union Drinking Game. When these things happen (and they undoubtedly will), take a drink of your beverage of choice:

Obama says, "The state of our union is strong ..."

Drink when the president says this, or something like this. Obama usually puts a twist on the familiar phrase. In 2013, he said, "We can say with renewed confidence that the State of our Union is stronger." Last year: "It is you, our citizens, who make the state of our union strong." Bottom line: Barring a wild declaration that the union is, in fact, weak and crumbling, have a lusty gulp of American brew right here. The night is off to a strong start.

... then lists reasons why it's not so "strong" after all.

Whoops. Also a tradition. Presidents like to use the two minutes or so following the initial declaration of strength to chuck out a few examples of what isn't going so well. When this happens, try to crack an English bitter (a pale ale will do). Something that really says, "declining empire." Chug 10 seconds for each example given, e.g. "But average wages have barely budged. Inequality has deepened. Upward mobility has stalled." That's 30 seconds right there.

You can go two ways here. Are you a wealthy American who has not been paying his or her fair share? If so, please pour your unemployed friend a few sips from that magnum of Montrachet you've kept mounted over your fireplace for the past year. Now, if you are not among the wealthiest Americans and have been paying more than your fair share, given the tax code and whatnot, pour some of that watery lager on your rich friend's head. Because this is, you guessed it, "class warfare"!

Joe Biden makes a facial expression that blows up your Twitter feed.

Maybe the vice president points at someone and winks. Maybe he points and winks at seven different people for two straight minutes as the president makes his way to the microphone. Maybe he throws some grinning faux side-eye at House Speaker John Boehner (R-Ohio), seated to his left, then chuckles gaily.

Biden will do something awesome early, so you should be ready with a shot of Jaegermeister. To be clear: Not a Jaegar bomb. We're just getting started. Have some class.

Obama discusses immigration reform and the camera cuts to the GOP senators running for president in 2016.

Do the calculations, then drink that number of bottles of expensive champagne. This is a good activity because it will sharpen your math skills and save you cash, given the overwhelming amount of time these senators, all likely 2016 presidential candidates, will spend onscreen. Obama has been known to speak at great lengths on this complicated and important matter, but it should about cancel out in the end.

Call your friends together — both of them — and try to agree on what kind of shot to take. Still can't decide? Unanimity in drinking choices is not unlike coalescing 300 million people around a political initiative: The desire is easy to articulate, but getting everyone on board with the way forward is difficult. If, however, Obama says something like, "Despite less than 50% of Americans now saying they want new gun control laws, c'mon folks, they are totally necessary and very popular with Democrats, and so I would like to do that," then stop drinking because you've clearly had too much already and might be slipping into some kind of fever dream.

Obama introduces a catchphrase — like George W. Bush's "axis of evil" — that the White House is clearly trying to make happen.

Bush's implication in 2002 that Iran, Iraq and North Korea were somehow aligned against the U.S. shaped perceptions about American foreign policy priorities for the rest of his presidency and into Obama's. So what's the commander-in-chief got up his sleeve? On this night, with his time in office winding down, the president must be hoping to drop a memorable line or two.

Thus, for every obviously trying-too-hard line, the kind meant to be repeated and recalled in the coming years, open a new can of "lite" domestic beer and drink half. Leave the rest of it out to warm, flatten and inevitably begin to smell like a fraternity house basement. Let it remain there for years as a none-too-subtle reminder of what you used to drink and how poorly it's aged.

Obama says, in any context, "the middle class."

Sit on your hands! Do not — repeat — do not drink. Not even water. Excessive water intake can be toxic. The human body is only equipped to handle so much. As the Scientific American reported in 2007, "When a person drinks too much water in a short period of time, the kidneys cannot flush it out fast enough and the blood becomes waterlogged." Again, this should be a theme Tuesday night, by which we mean just about every policy initiative will be tagged to "the middle class" and its need to "grow." So seriously, careful on this one.

The president has a reputation for being the coolest cat in the room. That said, he also wears dad jeans, plays a ton of golf and, when not in a suit, dresses like an aspiring normcore model.

And then there's this — the infamous "spilled milk" joke from his 2012 State of the Union. Watch below:

As a nation, we need to be ready for this to happen again. First daughters Sasha and Malia were notably mortified by their dad's Thanksgiving "turkey pardon" performance, so there's every chance for a repeat performance this year. In preparation, please keep handy a big glass of red wine, ideally poured from a spigot. When the awkward silence hits, take a big gulp and stare at the floor for 30 seconds.

Someone is caught on camera sleeping.

Don't be fooled by what might appear to be some kind of squinty, concentrating look. That person is sleeping.

The speech is scheduled to begin at 9 p.m., but by the time Obama makes his way down the aisle and endures a few standing ovations, it will be about 20 minutes later than most of the audience is accustomed to being awake, let alone awake and in work attire.

Don't fall prey yourself to this embarrassing lapse in manners: Drink a vodka and Red Bull and really get into this thing!