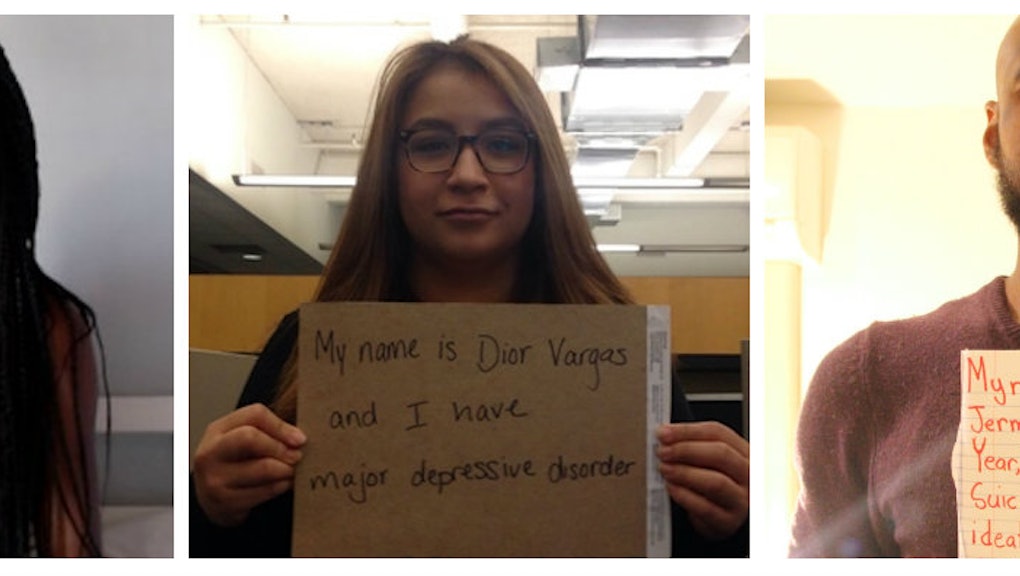 Despite the efforts of public figures like Demi Lovato and Jon Hamm as well as popular campaigns designed to raise awareness about its effects, mental illness is undeniably still stigmatized in America. Insulting depictions in pop culture, legal discrimination and widespread inadequate health care — just to name a few examples — make this reality clear.

Even when efforts are made to confront this stigma, people of color are rarely represented, obscuring the complex experiences they endure.

"Stigma makes the experience of people of color with mental illnesses much more difficult because they are dealing with a multitude of other oppressions," Dior Vargas, a self-described "Latina feminist mental health activist" told Mic. "They are made to feel like an 'other' and so this illness would add to this definition of an other."

Vargas is on a mission to change this. She recently launched the People of Color & Mental Illness Photo Project, a moving compilation of images meant to challenge people of color to "speak out and unburden themselves of the shame and secrecy" of living with a mental illness by "changing the way" people of color with mental illnesses are represented, according to her website.

It's an experience with which Vargas is intimately familiar. "I don't remember when I didn't have depression," Vargas said. Despite finding some solace in therapy and medication, Vargas has still struggled to maintain relationships while suffering from depression — a struggle made even more difficult by her isolation. She said:

"I knew no other young women of color who shared my experience. No one talked about it. ... I came to realize that a huge part of this stigma is because people of color are not included in the representation of mental illness. How can we destigmatize this in our community if we are never shown in its representation? If we do not see ourselves in this then why would this be an important topic in our community?"

The combination of this dearth of representation and Vargas' personal desire to create a community inspired her to launch the project with the hope it will provide a platform that will not only boldly empower people of color with mental illnesses but help them feel less alone.

Vargas hopes that empowering individuals to publicly claim their experience with mental illness will help combat culturally specific stigmas surrounding seeking medical help. For example, some African-American communities uphold the power of faith and church in healing as opposed to psychological treatment. As a result, most minority groups are less likely to take advantage of mental health services than their white counterparts.

What's more, internalized, community-based stigma is hardly the only barrier people of color face when it comes to mental illness: Systemic and cultural racism have real effects as well. While almost half of all Americans will develop some form of mental illness during their lifetime, minorities are far more likely to go untreated, according to the National Institute of Mental Health.

Even when people of color want to obtain treatment, they face decreased access to and poorer quality of health care. They are also more likely to be given more severe diagnoses than their white counterparts. For example, a 2005 study showed that while schizophrenia affects all ethnic groups at similar rates, black Americans are four times as likely and Latinos three times as likely to be diagnosed with the disorder than whites. People of color are also more likely to be subjected to unethical treatment such as forced hospitalization.

Why? The answer may be rooted in the way we define mental illness as "slanted toward pathologizing basically angry black men," according to Jonathan Metzl, a Vanderbilt University psychiatrist. Leah Harris echoed this sentiment on Truthout, writing that "the public tends to think of people with mental health problems as the violent 'other,' similarly to the way young men of color are stereotyped as inherently dangerous." Because they are pathologized in this way in dominant society, people of color are often categorized as inherently violent and mental illness is obscured.

Whether internalized within communities or bolstered by systemic racism, the results of this stigmatization are disturbing. Studies show only 12% of African-American women seek help and/or treatment for depression, only 10% of Latinos with psychological disorders contact mental-health specialists and that Native Americans/Alaska Natives are 1.5 times more likely to experience serious psychological distress than the general population.

Most concerning is the emerging evidence that mental illness is only increasing in prevalence among some minority communities: Suicide rates increased 233% over 15 years among African-Americans aged 10 to 14, for instance, compared with 120% among white Americans in the same age group, according to the NAMI Multicultural Action Center.

Seeing others bravely recognize their mental illnesses may help realize the experience is a common one and not a personal failing. This realization was, after all, a game-changer for Vargas. Knowing that "my experience is much more than just my own" and "finding pride in that" was crucial to her personal process of healing and who she "is as a person," Vargas said. She added, "I've learned that I have strength and resilience which allows me to keep going despite the challenges that I constantly face."

At the very least, Vargas hopes the project can help others suffering from mental illness know they are not alone, and "encourage further discussions about mental illness and hopefully prioritize mental health in these communities. Unless it's being shared it is kept in a vacuum which helps no one."

"People of color need to be added to this conversation," Vargas said. "Show us as human beings who are dealing with this and who deserve equal mental health treatment. We are not an afterthought in this issue. We are tired of being ignored and made invisible."

To learn more about the People of Color & Mental Illness Photo Project and/or submit a photo, visit the project's website. All photos were selected by Mic, courtesy of the Project.

Update: The text has updated to reflect further information provided by Dior Vargas.