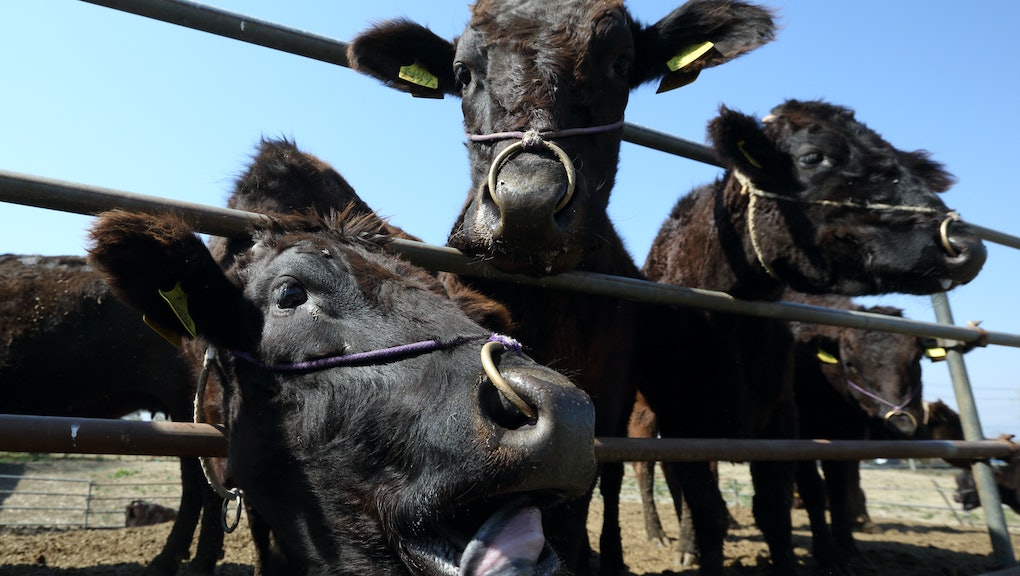 The U.S. meat industry is making us lose our appetites.

According to the New York Times, the U.S. Meat Animal Research Center, a federal institution that uses American tax dollars to make "lamb chops bigger, pork loins less fatty, steaks easier to chew," is using surgery and breeding techniques to achieve those ends — with deadly consequences for livestock that border on animal abuse.

Stories of newborn lambs dying from exposure, piglets being crushed to death and a cow dying after being locked into a restraint while she was repeatedly mounted by six bulls for hours already have animal rights groups pushing for an immediate investigation of the center's research practices.

Concern about the agro-industrial complex has historically focused on Monsanto, the patent-squatting agricultural monolith that brought us Agent Orange and DDT, and the unhealthy packaging of the industry's final products into angina-inducing Double Downs and Triple Baconators. But the New York Times' report highlights the actions of a government initiative that's responsible for taxpayer-funded re-engineering of livestock through Frankensteinian means.

It's the research center that law forgot. Although legal protections for research animals have been in place for nearly five decades, the Department of Agriculture "does not closely monitor the center's use of animals, or even enforce its own rules requiring careful scrutiny of experiments," according to the New York Times, and as a result, has become a hub for controversial research that other private corporations and factory farms aren't even allowed to attempt.

"They pay tons of attention to increasing animal production and just a pebble-sized concern to animal welfare," scientist and veterinarian James Keen, who worked at the center for 24 years, told the New York Times. "And it probably looks fine to them because they're not thinking about it, and they're not being held accountable. But most Americans and even livestock producers would be hard pressed to support some of the things that the center has done."

The Department of Agriculture told the New York Times that the center abides by federal rules on animal welfare. According to Sherrill E. Echternkamp, a scientist who retired from the center in 2013, the ends justify the means: "We are trying to feed a population that is expanding very rapidly, to 9 billion by 2050, and if we are going to feed that population, there are some trade-offs."

The consequences of those trade-offs have been horrific. Much of the center's research has been focused on increasing the birth rate for farm animals to unnaturally high levels as a way of increasing productivity. For example, pigs now give birth to up to 14 piglets at a time, instead of the natural eight per litter — and as a result, more than 10 million of those piglets, too undernourished or crowded to move, are crushed nationwide every year when their mothers roll over.

At the center, the genome project used to create more fertile cows (cows typically only give birth to a single calf at a time) led to freakish defects and brutal, sometimes deadly births. Ninety-five percent of the female calves born with male siblings had deformed vaginas and were infertile. Many twins died during birth as their eight legs became tangled in the birth canal. Even healthy sets of twins grew weak as their mothers strained to produce enough milk for two calves.

But the animals that have received the worst treatment, according to the report, are the center's sheep. Lamb consumption in the United States has collapsed over the past half-century: In the early 1960s, the average American ate 4.5 pounds of lamb per year. Now, that number is less than a pound per year. The number of sheep in the U.S. has been cut in half in the past 20 years, and the national flock is one-tenth the size it was during World War II.

The shrinking state of the business has pushed the center to put sheep through some of its deadliest experiments in the name of reviving the sheep-as-foodstuff industry. In an experiment that hoped to create larger lambs, pregnant ewes were injected with so much testosterone that their lambs' genitals were deformed, making urination difficult and painful upon birth. "Death losses were high," the lead scientist laconically noted in 1990.

In the hopes of using natural selection to create a race of "easy breed" sheep are currently forced by the center to give birth in open fields without human assistance. (Ed.: Anecdotal experience informs us that sheep are incredibly difficult to successfully raise, partly because sheep are really, really dumb — if they eat food while facing downhill, they can die from colic. It was joked when we were younger that the only thing a sheep can't die from is old age).

The experiment in self-sufficient sheep ended predictably: Ewes are notorious for abandoning newborn lambs, even in expensive "lambing barns" that force them into proximity, and the "free range" ewes did just that — as did the center's scientists, who left the lambs to starve in freezing fields.

"Some days, 30 to 40% of the lambs were dead, and some of those still alive were in bad condition, separated from the moms, and they would be dead the next morning," said Cristiano Bouéres, a student from Brazil who was assigned to gather the dead lambs as part of his veterinary program. "As a vet, you always appreciate animal welfare, and you want to have all of your patients taken care of and looking good and being fed."

Death rates for the center's lamb population have ranged between about one-quarter and one-third of the flock, triple the rate that industry experts consider acceptable. The lambs that didn't die from starvation or exposure were easy pickings for coyotes: In a 2011 memo, the experiment's lead scientist, who was "greatly concerned from an animal well-being perspective as well as the impact of predation on our research program that focuses on genetic effects of lamb survival," asked the center's director for help after 12 lambs were killed in four days. More guard dogs were added, to little avail.

Some of the deaths are merely the result of negligence. Of the 580,000 animals the center has housed since 1985, at least 6,500 have starved to death. Mastitis, an easily treated infection of the udder, has killed more than 625.

Even among these figures, one story sticks out in its sheer brutality. Keen recalled an incident from when he first started working at the center, where he was called by a fellow worker to assist with a "downed cow" in an experiment. "There was a young cow, a teenager, with as many as six bulls," he told the New York Times.

"The bulls were being studied for their sexual libido, and normally you would do that by putting a single bull in with a cow for 15 minutes. But these bulls had been in there for hours mounting her." The cow's head had been immobilized for the experiment, her head locked in a cage-like device. "Her back legs were broken. Her body was just torn up." Keen wanted to euthanize the animal, but was required to gain permission from the scientist in charge of the experiment, who could not be tracked down. It took hours for the cow to die.

The incident highlights the tensions between the center's researchers, whose goal is to lower the price of American meat, and its veterinarians, who have sworn an oath to treat animals humanely. At the center, the researchers clearly have the upper hand: The center's 30,000 animals are tended by roughly 44 scientists and 73 technicians, none of whom have medical or veterinary degrees. The work of euthanizing and operating on livestock is routinely performed by assistants, who occasionally perform two or more major surgical operations on the same animal.

John Klindt, a scientist who retired in 2008, defended the practice of letting untrained researcher perform live animal surgery. "A vet has no business coming in and telling you how to do it," he told the New York Times. "Surgery is an art you get through practice." Also, medical school.

Consumers don't want to consume meat made this way. Americans confronted by books like Fast Food Nation, documentaries like Food Inc. and appalling reports like this have been turned off by meat, with consumption of red meat dropping in the United States for the first time in decades. More and more frequently, consumers scandalized by the horrors of factory farms, pink slime, runoff lagoons and the flagrant human rights abuses conducted in American abattoirs are turning to humanely raised meat, or no meat at all.