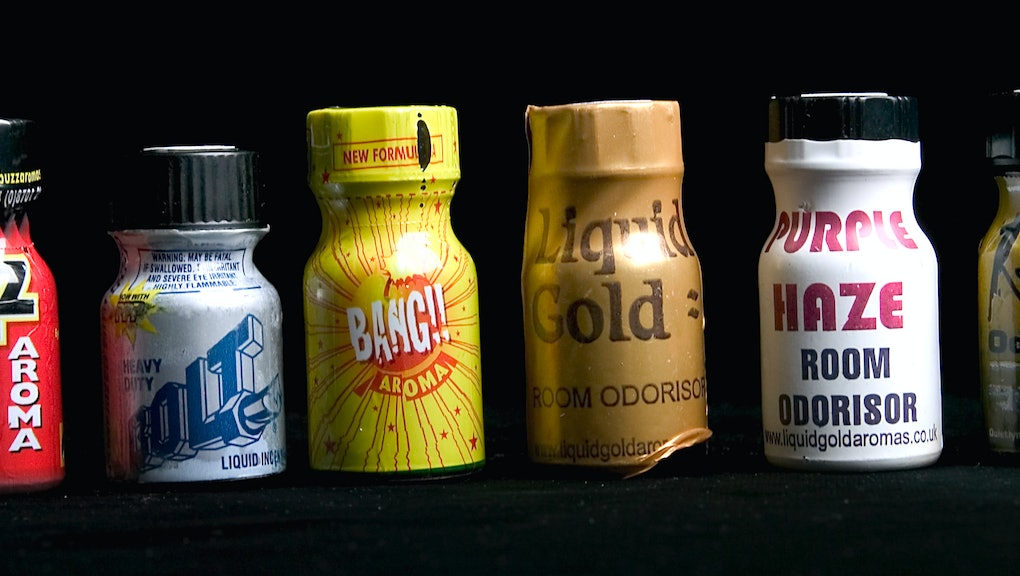 Newer "Popper" Drugs May Be More Deadly Than You Think

Poppers just aren't what they used to be — and for users, that could spell danger.

Background: Poppers have been on the scene since the 1970s. Back then, they were made of liquid nitrates and sniffed from a bottle. Getting a bottle of poppers was as simple as buying video head or leather cleaner, and the health impacts typically stayed in the range of nosebleeds, bad headaches and nausea.

The newest poppers on the market are being made with more harmful "huffing" solvents, like acetone, gasoline and ethyl chloride. Inhalants carry the risk of nerve damage, memory loss and a heart dysfunction that can result in "sudden sniffing death." Now that the line between conventional "poppers" and "huffing" solutions is becoming blurred, users accustomed to one kind of drug may not be prepared for another.

Until now, the researchers point out, huffing has been considered a problem that plagued adolescents from lower socioeconomic backgrounds in the United States. Those who use today's poppers might not even be aware that what they're doing is huffing.

"American [men who have sex with men] may not recognize huffing for what it is — a serious health threat — but rather, falsely identify it as just another form of alkyl nitrate poppers, which it is not," write the team led by Timothy Hall of the University of California, Los Angeles.

Why this matters: The problem is twofold: Those who are using poppers may not be aware that they are more harmful than they were in the past, and the new drug and its health impacts are poorly documented. In fact, the researchers say, most gay men who use poppers don't see the harm in it and generally feel like claims against the drug might be overblown.

The body of research completed on poppers is scanty at best. Some studies suggest it could cause instant vision loss or temporarily weaken the immune system. And while poppers are not linked to any cancers, there is preliminary evidence they might play a role in promoting tumor growth. It's difficult to weigh the pros and cons of using a drug that's so poorly studied, which is why for now, it may be best to err on the side of caution until researchers can sniff out the truth.