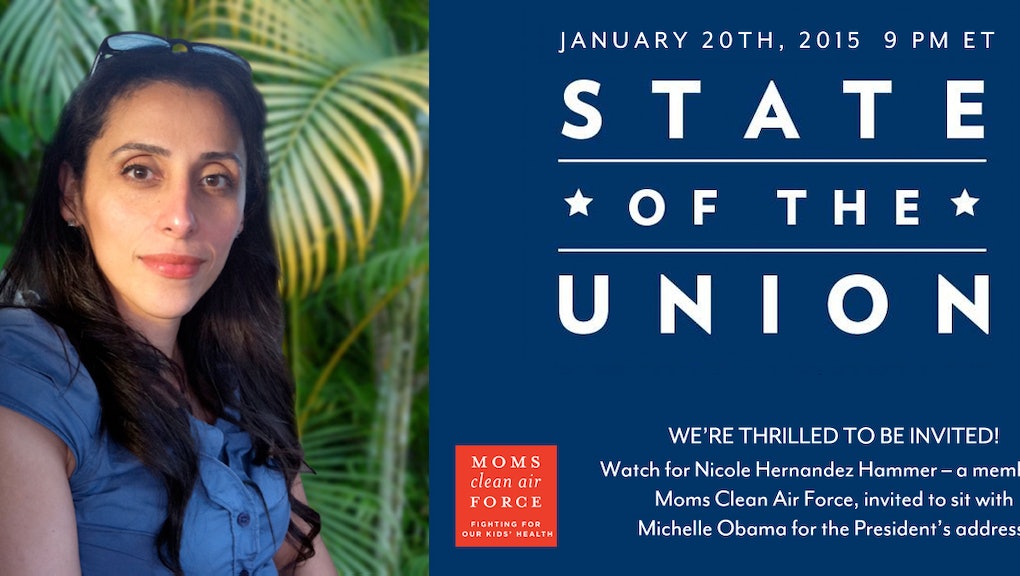 Last week, Nicole Hernandez Hammer received an unexpected phone call at her home in Jupiter, Florida. The White House was on the line, asking if she would be interested in coming to Washington to attend the State of the Union as a personal guest of first lady Michelle Obama.

"Amazing. I wasn't expecting it — it was definitely a surprise," she told Fusion about the invitation.

Hammer is a climate science researcher who has studied regions that are prone to climate change and sea-level rise. She's a Guatemalan immigrant with Cuban heritage who moved to the United States at the age of 4 and now lives in Florida with her husband and 7-year-old son. Hammer recently left academia to head the Florida chapter of Moms Clean Air Force, a network of hundreds of thousands of parents that work to combat air pollution through awareness campaigns, online actions and protests.

The first lady's personal guests enjoy prime seating at the State of the Union and are often called upon by the president as examples of those who embody the ideals laid out in the speech itself. The 21 guests attending the this year's State of the Union include an astronaut, an Afghanistan War hero, a recently released Cuban aid worker and a doctor who fought Ebola in Africa.

Hammer's invitation is easy to understand — she embodies a number of values important to the Obama administration, and is a kind of model citizen for America's future, at least as many progressives would have it.

Her work has also struck upon the intersection of race, class and climate change. According to the White House, some of her research has looked into the unique vulnerabilities of Hispanic populations across the U.S., which she learned first-hand growing up in South Florida.

An important issue: At Moms Clean Air Force, she's carried on with this focus by advocating for the particular importance of carbon standards for Hispanic communities in the U.S. Given that the White House has been exceptionally enterprising on climate change recently — including agreeing to a deal that implicitly acknowledges the different situations that affluent and poor communities face in dealing with the issue — Hammer is a natural guest for Obama's address.

"I think that communities of color need to know [about climate change] — we are disproportionately impacted by it, and will be more so in the future," she told Fusion.

Hammer is right: Climate change was detected through dispassionate scientific reasoning, but society's response to it is colored by politics, economic interests and race. Let's hope that she serves as an example for this kind of awareness for others while she visits Capitol Hill.