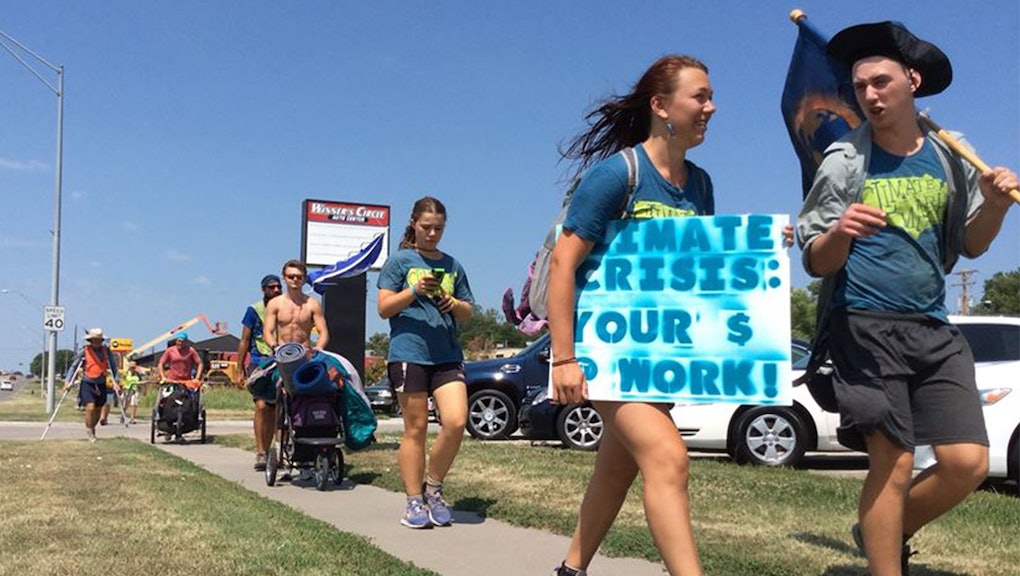 Polling has found that around 70% of Americans describe themselves as active members of or sympathizers with the environmental movement. But some of us are doing a lot more than others.

Meet Kelsey Juliana, the 18-year-old from Eugene, Oregon, who's a freshman at Warren Wilson College in North Carolina and just happens to be taking on the government in one of the most potentially deadly threats facing the world today: climate change.

"I want to remind them that we are their employer," Juliana recently told the Huffington Post, referring specifically to politicians who deny the scientific consensus on climate change. "The government works for us. If you're not doing your job, then I'm going to call you out on it."

The teenager: For three years, Juliana and 14-year-old Olivia Chernaik have been fighting Oregon's Democratic Governor John Kitzhaber in court over the state's unwillingness to prepare its citizens for the impacts of global warming.

To pursue her goal, Juliana deferred her first semester at Warren Wilson College to help organize the Great March for Climate Action, which saw a group of committed activists cross the entire continental U.S. on foot for an awareness-raising campaign. With Juliana's support, the lawsuit has already progressed farther than a similar federal lawsuit that was dismissed in December.

Juliana and Chernaik claim that the public trust doctrine, which requires states to protect certain natural resources for future generations, also requires Oregon to contribute to a climate-change plan that will lower its environmental impact.

Their suit specifically wants the courts to order the state to contribute to a climate-change plan that helps "return atmospheric concentrations of carbon dioxide to 350 ppm by the year 2100," the maximum amount of carbon dioxide NASA scientists believe the Earth's atmosphere can safely absorb without causing dangerous temperature increases.

The background: Juliana and Chernaik's crusade got a major boost in June 2014 when the Oregon Court of Appeals overruled a lower court's decision that environmental regulations were a political matter beyond its authority. Now, the lower court has been ordered to decide whether the public trust doctrine requires the state to regulate its impact on the atmosphere. According to the Huffington Post, arguments on the case will begin in March.

In an interview with progressive commentator Bill Moyers, Juliana explained that "public trust states that the government is a trustee to protect these natural resources that every living species, including humans, rely upon for our survival, for our well-being. ... The atmosphere is just the all-encompassing resource that everything depends on, every life force. So to kind of not hold that in protection, to let that be exploited and polluted, it goes against our rights. And it's not just."

She added that ignoring climate change would endanger future generations: "But I just think, you know, if I'm worried now about having children, I can't imagine 10, 20 years from now like the life that they'll take. The worries that will be on me when I'm a mother will just be incredible."

What happens next: A successful suit would be an incredible victory for environmentalists and could potentially bolster suits in other states. In Oregon, it would essentially mandate Gov. Kitzhaber to reverse his position on several issues, including his support of coal subsidies.

Despite support from local leaders and activists, environmental law experts offered a dismal but realistic assessment of the lawsuit. Lawyer Willy Jay told the Huffington Post that "For a state court to declare that the atmosphere is a public trust subject to control of the state government would be an unprecedented holding."

Even if the high-profile suit is unsuccessful, it will have generated invaluable attention towards the government's inaction on climate change during an important year for the environmental movement. The upcoming 2015 United Nations negotiations in Paris represent the culmination of 20 years of discussion and have attracted prominent backers, including Pope Francis. Meanwhile, 2014 was likely the hottest year in recorded human history. With the stakes so high, it's good to see people taking action.