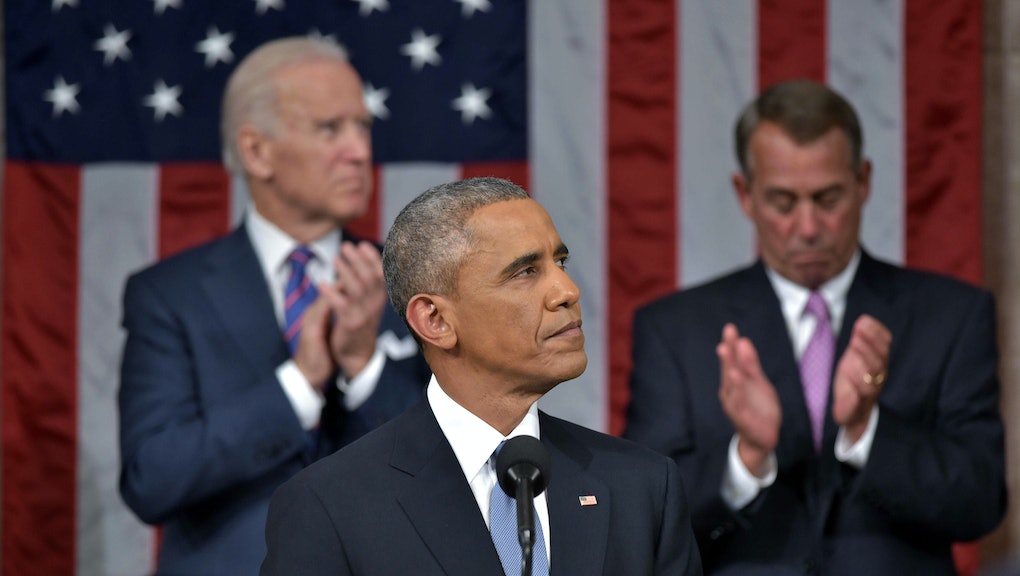 During his State of the Union address on Tuesday night, President Barack Obama laid out several policy proposals for Congress, such as a call for free community college, a resolution to use force against terrorist network Islamic State group and a new tax code.

But what are the odds these ideas take concrete form and pass into law? FiveThirtyEight points to a revealing study of the presidency that suggests that, for most of Obama's requests, the chances of them coming to fruition are slim. And with Republicans in control of Congress, those odds look even bleaker.

A volatile history: Political scientists Alison Howard and Donna Hoffman have put together a handy tool for assessing the success of presidents in having their State of the Union policy proposals enacted over the course of the past half-century. They've found that since 1965, the median number of requests per address is 31; these requests are fully successful 27% of the time, and partially successful 41% of the time.

FiveThirtyEight has a useful visual display of modern presidents' success rate over the years, which vary enormously even over the course of a single presidency. You can see that the number of proposals floated by presidents in recent State of the Union addresses has been woefully low:

Obama's success rate: How does Obama fare by these standards? His requests have varied greatly by the year, from 21 in 2009 to 41 in 2013. Last year, he made 29. According to Dominican University of California's report on the study, during his first term, his median full and partial request success rate was about 45% during his first term (similar to Ronald Reagan's record).

What are the odds for Obama's new requests in the the upcoming year? On one hand, with Republicans decisively controlling both chambers of Congress for the first time during his presidency, the odds of fulfilling his requests are grimmer than ever. On the other hand, in the run-up to 2016, the establishment of the Republican Party may be more inclined than in recent years to work with the Democrats and actually produce concrete results for disillusioned voters who are likely to punish both parties for failing to get anything done. The Republicans are too powerful on the Hill to to afford to be a party of total opposition and heel-dragging.

But, if history is any guide, most of the proposals you hear from Obama during the State of the Union won't become law — for better or worse.