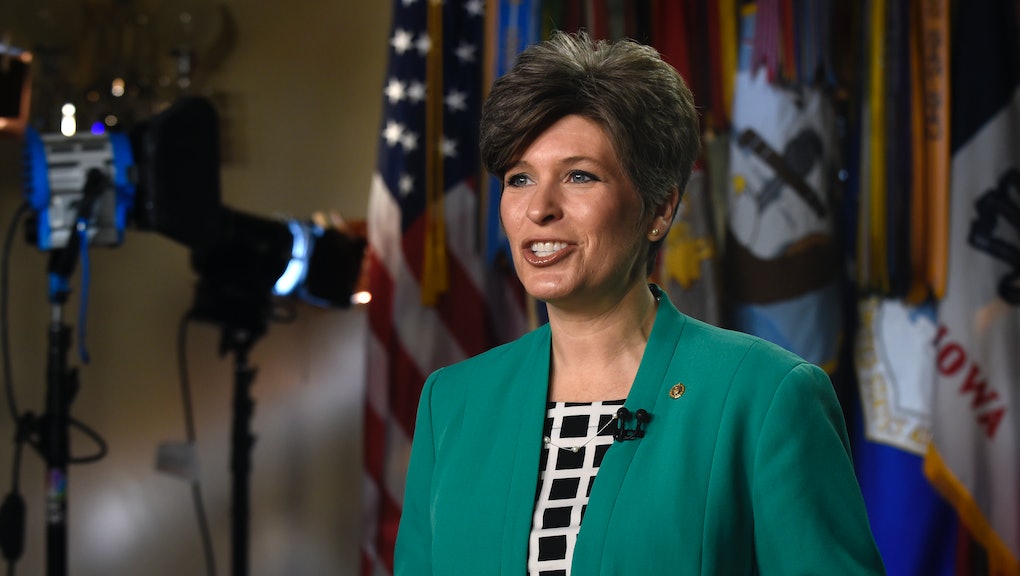 Who Is Joni Ernst? Meet the Freshman Senator Delivering the Republican Response

If you're like millions of Americans, Tuesday night might be the first you're hearing of Sen. Joni Ernst (R-Iowa). The freshman Republican senator is giving the GOP response to the president's State of the Union tonight, and she's well on her way to becoming a rising star in the party.

But she was previously best known for the campaign ad heard 'round the world in 2014. Titled "Squeal," the campaign spot included this now-famous line: "I'm Joni Ernst. I grew up castrating hogs on an Iowa farm."

The ad cost just $9,000 to make and racked up more than 400,000 views in the three days after it was released. But more importantly, it launched the little-known Iowa state legislator's Senate bid into the national political headlines. With the backing of well-funded conservative groups, she trounced Democratic Rep. Bruce Braley on Election Day. Two weeks ago, she was sworn in as the first female U.S. senator in Hawkeye State history.

On Tuesday, the 44-year-old Iraq War veteran and mother of three becomes the face of her party.

Ernst's response to the State of the Union: "We see our neighbors agonize over stagnant wages and lost jobs. We see the hurt caused by canceled health care plans and higher monthly insurance bills. We see too many moms and dads put their own dreams on hold while growing more fearful about the kind of future they'll be able to leave to their children," Ernst was set to say Tuesday night, during her response to Obama's speech. "Americans have been hurting, but when we demanded solutions, too often Washington responded with the same stale mindset that led to failed policies like Obamacare."

During her Senate campaign, Ernst raised some eyebrows when she said, in the course of questioning President Barack Obama's leadership, that it was simply a reporter's "opinion" that only one person in the U.S. currently had Ebola. (There was, in fact, just one person with Ebola in the country at the time.) But don't be fooled: Ernst is politically savvy. She is a normally reliable and often charming messenger for the tea party cause.

Now she is the latest addition to the Republicans' new Senate majority, where she is expected to line up alongside and vote with strict conservatives like Sens. Ted Cruz (R-Texas) and Mike Lee (R-Utah).

"Washington is full of big spenders," Ernst said in that now-famous campaign clip. "Let's make 'em squeal." In her Senate office today, there is a welcome gift from Sen. Lindsey Graham (R-S.C.), a "livestock castration device."

"She's personable; farmer's [daughter], in the National Guard. I think that carries a lot of weight," an Iowa Democrat told Politico during her smart and successful 2014 campaign. "A lot of people admire the combination she's got."

Tuesday night's speech was a rebuttal, but it was also an introduction. Joni Ernst is in Washington to try to make liberals "squeal" for a long time to come.