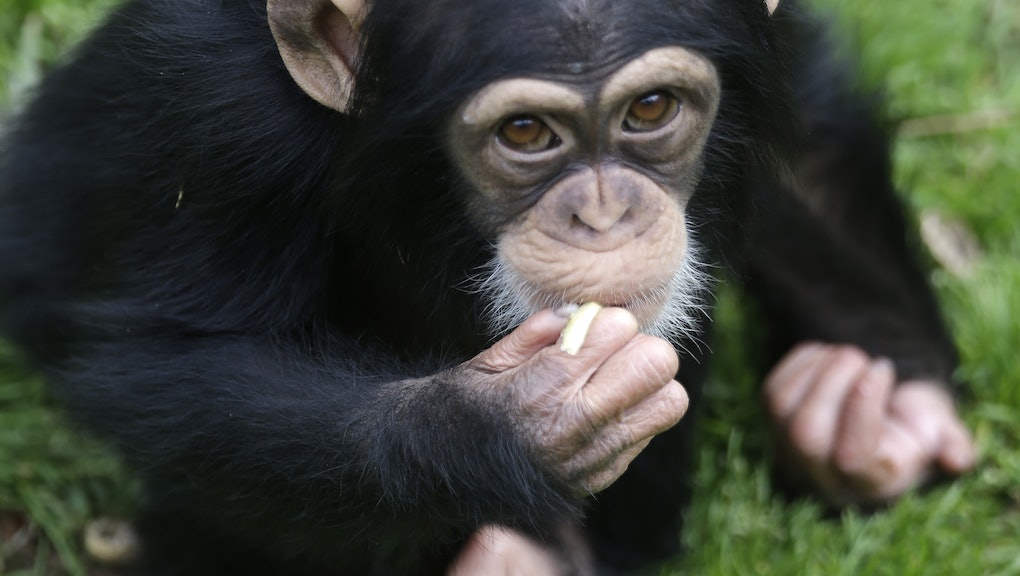 Jane Goodall: We Need an Ebola Vaccine for the World's Chimpanzees and Gorillas

As if the human toll of the Ebola outbreak weren't grave enough.

Conservationists are attempting to draw the world's attention to one of the more overlooked consequences of the four-decade rise of the Ebola virus: It is estimated to have killed one-third of the world's combined population of chimpanzees and gorillas, according to the Jane Goodall Foundation. Ebola is just as deadly to declining populations of gorillas and chimpanzees as it is humans — with up to a 90% mortality rate — putting further stress on many at-risk or endangered species.

Research has concluded it can take generations for populations of great apes to recover from a single Ebola epidemic — and given the unprecedented size of the current epidemic, the impact on primate populations could be severe.

The background: Humans have contributed to the primates' plight in more ways than one. In fact, scientists believe that human encroachment on African ecosystems indirectly caused the Ebola virus to mutate from a less virulent form around 1970 to its current, more virulent strain.

According to Robert Cohen, a physician at the U.S. Army Public Health Command, "all Ebola viruses faced a genetic bottleneck as their reservoir host populations declined due to hunting and habitat destruction," worsening as the bat population that likely acted as the virus' reservoir declined in number. As the disease adapted, one of the most important results was increased infectivity among primates. Cohen additionally notes in the Baltimore Sun that approximately 50% of peak African forest cover has been destroyed, while bushmeat hunting and deforestation continue at high rates.

While the current epidemic in West Africa has left gorillas largely untouched — they mainly live in Central Africa — the University of Cambridge's Peter Walsh said chimpanzee populations in the area may have been affected. The current Ebola virus in West Africa is the same one blamed for destroying primate populations elsewhere, and the virus could easily re-emerge in central Africa as it briefly did in 2014. Outbreaks in 2002 and 2003 at Lossi Sanctuary in northwest Republic of Congo is estimated to have killed over 90% of the gorillas there, or about 5,000 gorillas.

Even chimps in sanctuaries have come under the threat of Ebola. In October 2014, One Green Planet reported that Sierra Leone's Tacugama Chimpanzee Sanctuary was operating at a major loss because of reduced revenues, while two staff members had lost relatives to the disease. The population of 90 chimpanzees were at risk as the "Ebola epidemic threatens the future security of their lives."

The Journal of Animal Ecology's Sonia Altizer argued in December that the human cost of Ebola was inseparable from its relationship to the destruction of natural habitats. Conservation efforts are actually crucial to fighting Ebola, since the disease and the economic chaos they can cause severely disrupts local food supplies.

"The agriculture and food security situation is really deteriorating," U.N. Food and Agriculture Organization's Vincent Martin said in September. "People either cannot afford to buy food or it is not accessible anymore." As a result, Altizer says that locals are more likely to turn to bushmeat to get by — in the process coming into contact with infected animals more often and further harming the environment.

Gorillas have attempted to adapt to Ebola by forming breeding groups more rapidly when threatened, but the stark reality is that they simply can't outbreed the deadly virus. "In the best conditions, it will take at least 50 years" for one infected gorilla population in the Republic of the Congo's Odzala-Kokoua National Park to recover, Dian Fossey Gorilla Fund International primatologist Damien Caillaud told the Dodo.

Possible solutions: Researchers now say they can safely vaccinate chimps and gorillas against Ebola if the current strain re-emerges in central Africa. The Canadian co-director of Gorilla Doctors, Mike Cranfield, told the CBC that the animals would be put in the unfortunate position of competing with humans for the same supplies.

"It's the combination of bushmeat hunting, habitat destruction and Ebola that is driving western gorillas to extinction," he told the Dodo. "Let's focus on what we can effectively do: control logging activities, fight the bushmeat trade. If we do this well, Ebola won't be a major concern anymore."