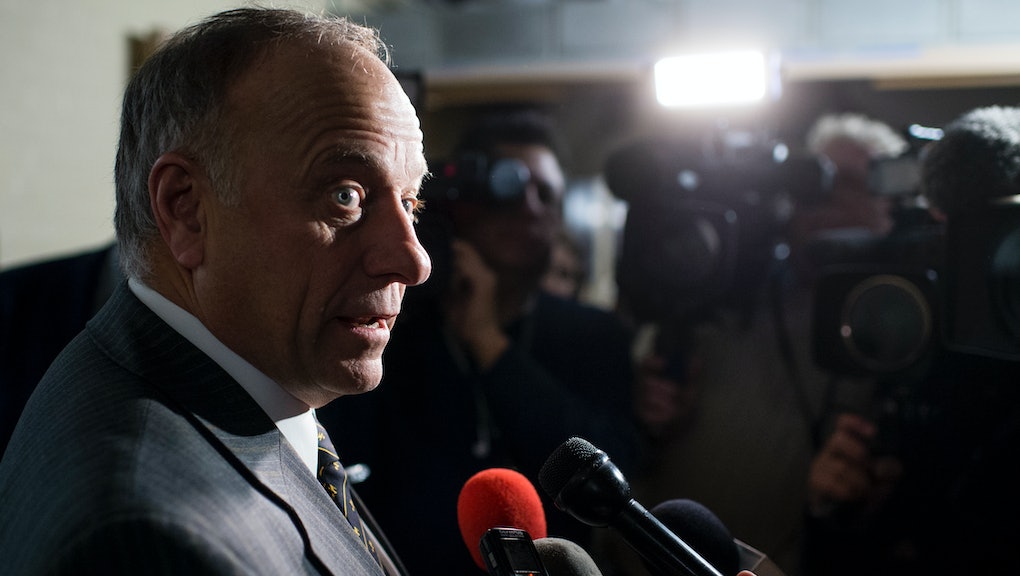 In One Tweet, This Republican Congressman Insulted Millions of Hard-Working Immigrants

Just before President Barack Obama's State of the Union address on Tuesday evening, firebrand Republican Congressman Steve King of Iowa took to Twitter to criticize the president on immigration in a perplexing and repulsive manner:

According to Politico, King's use of "a deportable" is in all likelihood a reference to Ana Zamora, a 20-year-old student from Dallas invited to sit with first lady Michelle Obama during the president's address. Zamora's parents are undocumented immigrants, but she was granted relief under the Deferred Action for Childhood Arrivals program.

"A deportable" bears an unfortunate resemblance to "an alien" and "an illegal" in the way that it dehumanizes the individual it refers to. These kinds of terms are shunned by popular media and progressives, who use the term "undocumented immigrant," for the same reason they are embraced by some conservatives: They diminish the humanity of the people they describe.

This wasn't a gaffe on King's part. He's a tea party Republican with a remarkable history of inflammatory and bigoted remarks toward immigrants and fervent opposition to allowing undocumented immigrants any kind of path to legal status in the U.S.

King began his career by trying to make English Iowa's official language. Since then, he has consistently made xenophobic remarks about undocumented workers, including false claims about their responsibility for drunk driving fatalities.

Of the DACA program that Zamora benefits from, he once said that for every child of undocumented immigrants "who's a valedictorian, there's another 100 out there who weigh 130 pounds and they've got calves the size of cantaloupes because they're hauling 75 pounds of marijuana across the desert."

When he was asked about Tuesday's tweet, King told NBC News to "shake it off" and have a sense of humor.