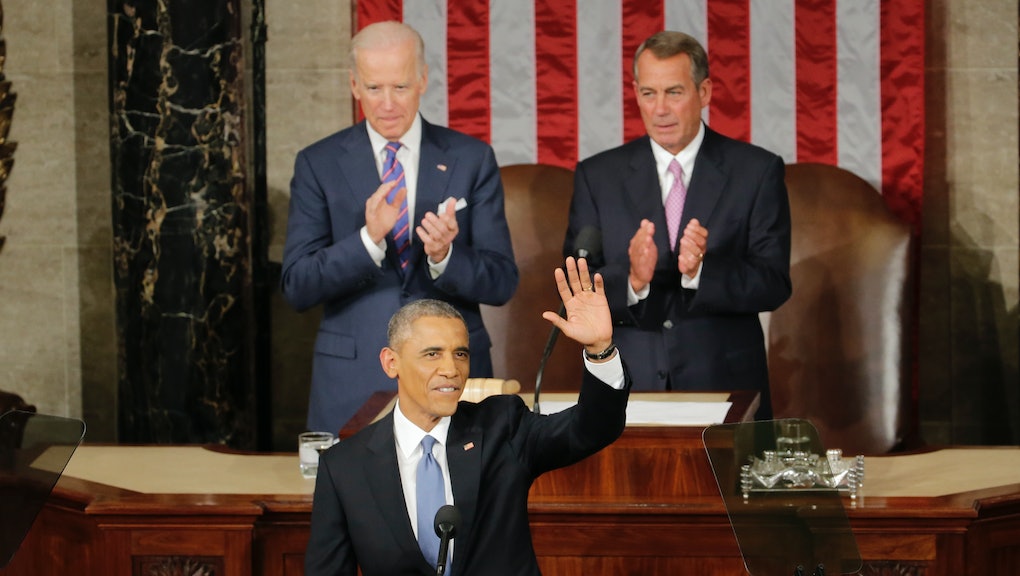 If You Are a Woman, These Are the 6 Lines From Obama's SOTU Speech You Need to Read

While it is arguable that every issue is a "woman's issue," President Barack Obama's State of the Union speech may leave women scratching their heads about whether or not he addressed issues important to them.

In short, he did — but he only spoke to some of them.

The address, the full-text of which became available online minutes prior to his speech, focused on elevating America's struggling middle class. Since women comprise nearly two-thirds of minimum wage workers, Obama's plan to foster the development of the middle class correlates to women's progress.

In this regard, Obama spoke directly to working mothers. And that's because his plan for women is based in economics. From his proposal for paid maternity leave to his demand for the end to the pay gap, he identified women not only as mothers and caretakers, but also as workers, students and human beings who deserve the dignity and respect of their government.

While some of his statements are vague and seemingly like noncommittal cop-outs (particularly that pertaining to a "woman's right to choose"), the following six excerpts reflect the president's larger political agenda on behalf of more than 50% of his constituents: women.

Working mothers are eligible for tax cuts of up to $3,000 per child.

The quote: "In today's economy, when having both parents in the workforce is an economic necessity for many families, we need affordable, high-quality childcare more than ever. It's not a nice-to-have ?— ?it's a must-have. It's time we stop treating childcare as a side issue, or a women's issue, and treat it like the national economic priority that it is for all of us."

The takeaway: Women shouldn't have to compromise their careers to raise children. Tax cuts will help alleviate the costs of childcare, which will make it easier for women to keep their jobs.

Women are eligible for paid (maternity or sick) leave from their states.

The quote: "Forty-three million workers have no paid sick leave ... I'll be taking new action to help states adopt paid leave laws of their own. And since paid sick leave won where it was on the ballot last November, let's put it to a vote right here in Washington."

The takeaway: Again, this proposal is aimed to help the working mother. While the proposal lacks details at the moment, it appears that the president will seek both paid leave laws at the state and federal levels.

The quote: "This Congress still needs to pass a law that makes sure a woman is paid the same as a man for doing the same work. Really. It's 2015."

The takeaway: Hopefully this line isn't symptomatic of Obama's commitment to seeing pay equality through during his final term. For 60% of American families, women are the primary or co-breadwinner. White women earn 78 cents to men's dollar; black women 64 cents; and Hispanic and Latina women 54 cents. Equal pay for equal work is the quickest way to gender equality. Period.

Women will have less student debt.

The quote: "I am sending this Congress a bold new plan to lower the cost of community college? — ?to zero."

The takeaway: Americans are  $1 trillion in student debt. With the increased rates of women graduating from college and graduate school, this proposal for free community college will help women not only achieve their education dreams but it will have financial effects: Women will be less in debt from student loans if this proposal succeeds.

Women's human dignity and free speech will be protected.

The quote: "We defend free speech, and advocate for political prisoners, and condemn the persecution of women, or religious minorities, or people who are lesbian, gay, bisexual or transgender."

The takeaway: While abstract, this single sentence reflects Obama's belief that all men — and women — are created equal and deserve due process under the law.

Women should have the right to choose.

The quote: "We still may not agree on a woman's right to choose, but surely we can agree it's a good thing that teen pregnancies and abortions are nearing all-time lows, and that every woman should have access to the health care she needs."

The takeaway: Women may be justified in feeling like Obama was noncommittal in this statement about reproductive rights. His statement only implies that women's right to choose is not only a good thing because it has lowered teen pregnancies and abortion rates. Let's hope that this failure to call explicitly for a woman's right to choose does not reflect the legislative year ahead on this front.

Overall, this SOTU address wasn't revolutionary for women — there was no call for an Equal Rights Amendment, and there were only vague references to reproductive rights and pay equality. However, Obama took women, and specifically working mothers, seriously as indispensable to the recovery of the middle class.