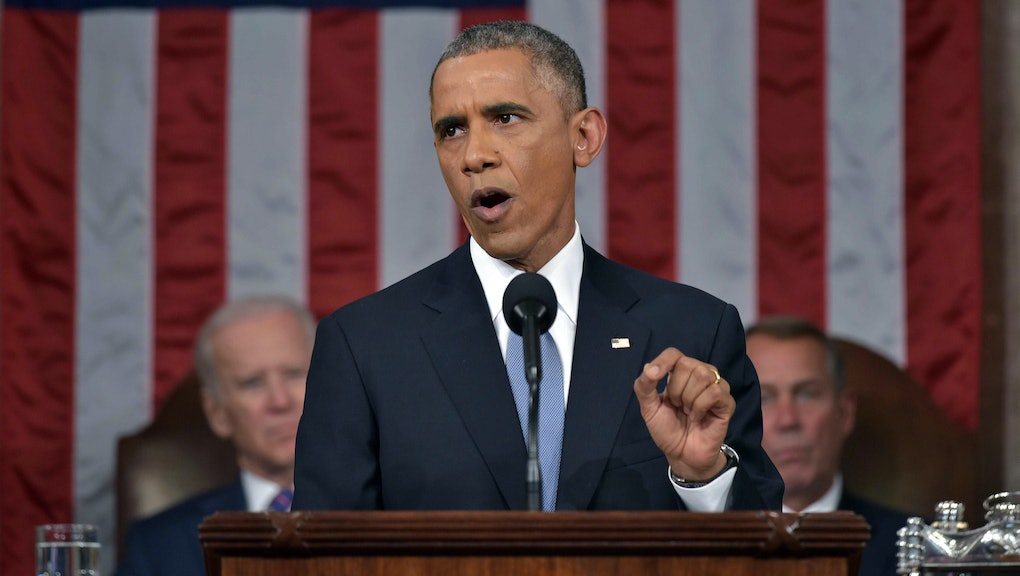 During his State of the Union in the nation's capital Tuesday night, President Barack Obama offered his view that same-sex couples' right to marry is a "civil right," taking a stand unlike any president before him on the issue of marriage equality.

"I've seen something like gay marriage go from a wedge issue used to drive us apart," he said, "to a story of freedom across our country, a civil right now legal in states that 7 in 10 Americans call home."

His remarks serve as a conclusion to the long and winding path he's walked on the issue. During his 2008 campaign, he came out against marriage equality, saying that marriage was "between a man and a woman" and that he was "not in favor of gay marriage."

In May 2012, however, he revealed his support for the right of same-sex couples to wed. "At a certain point, I've just concluded that for me personally it is important for me to go ahead and affirm that I think same-sex couples should be able to get married," he said then.

Obama's remarks on Tuesday night come just four days after the Supreme Court agreed to hear four cases challenging state bans on same-sex marriage. "If the court rules in favor of a nationwide right to marry," wrote Mic's Greg Krieg, "the justices would effectively end the decades-long legal debate and allow gay couples to wed in all 50 states."

According to the Human Rights Campaign and BuzzFeed's Chris Geidner, Obama's remarks also included the first-ever use of the words "bisexual" and "transgender" in a State of the Union address.

Though the comments were but a small portion of this year's symbolic State of the Union — the entire speech totaled about 6,500 words — they're a hugely important milestone in the fight for marriage equality. As Geidner writes, "Now the president will make clear that he has traveled the path to meet advocates at their goal: marriage equality is a civil right."

It's a watershed moment, not only for the president, but for the country as a whole.