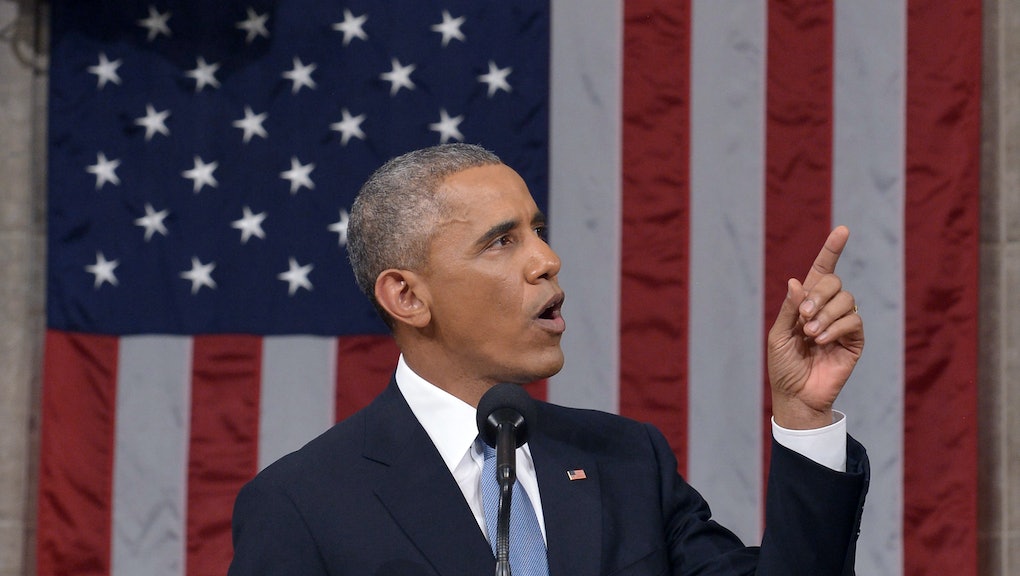 Another year, another pageant of self-aggrandizement and political posturing in our nation's capital. You can be forgiven for passing on President Barack Obama's seventh State of the Union address, humdrum, platitudinous boilerplate as these things tend to be. But in case you're wondering what you missed Tuesday night, Obama congratulated himself on an overall job well done and laid out his plans to a largely indifferent nation.

In his speech, the president touched on sundry topics, from "loopholes that let some corporations pay nothing while others pay full freight" to his "resolution to authorize the use of force against ISIL." Of particular interest to younger Americans were the White House's much-touted plans for improving the nation's broadband network and a proposal to offer two free years of community college for most students.

And in keeping with a cherished State of the Union tradition, those plans were long on feel-good rhetoric and short on substance.

Faster Internet, but how? Last year, Obama declared that, 14 years into the new century, "the United States is better positioned for the 21st century than any other nation on Earth." One year later, the 21st century is still, apparently, in the offing.

Obama said Tuesday "21st century businesses will rely on American science, technology, research and development." That includes access to high-speed Internet. First announced last week, Obama revisited his promise to extend the Internet to "every classroom and every community" and to "help folks build the fastest networks, so that the next generation of digital innovators and entrepreneurs have the platform to keep reshaping our world."

But it's one thing to promise high-speed Internet for all; it's another to implement it. The evidence for whether already-extant municipal broadband has been a success or failure is scant and largely anecdotal. Critics point to experiments like those in Provo, Utah — not to mention the state of Utah itself — and Burlington, Vermont, as proof that municipal broadband is costly and inefficient. Supporters, on the other hand, cite success stories like Chattanooga, Tennessee, as models for the rest of the country, though even Chattanooga's example is not without its critics.

The little data available on municipal broadband present a rather ambiguous track record. Brian Deignan, formerly of the Mercatus Center, found evidence suggesting that the growth of government needed to implement the policy outweighs the benefits to the private sector. And even if municipal broadband provides intangible benefits that don't show up on balance sheets, as some supporters allege, it's far from obvious that governments across the country are in a fiscal position to provide quality internet.

As Michael Mandel of the Progressive Policy Institute recently noted, many of the very state and local governments that Obama views as the engines of technological expansion can't even cover their current infrastructure obligations. Meanwhile, private investment in telecommunications and broadcasting is steadily rising.

Then there are the problematic legal issues. Obama's plan urges the Federal Communications Commission to override laws on the books in 19 states banning municipal broadband. But it's not obvious that the FCC even has the legal authority to do so.

"Free" community college: What about Obama's plan to provide free community college? (By "free" the president means partially funded by taxed college savings.) Here too, the story is more complex than the State of the Union address suggested.

"America thrived in the 20th century because we made high school free, sent a generation of GIs to college and trained the best workforce in the world," Obama declared, but "we still live in a country where too many bright, striving Americans are priced out of the education they need." He proposed solving the problem by "sending this Congress a bold new plan to lower the cost of community college — to zero" in hopes that "two years of college becomes as free and universal in America as high school is today."

Touted as a boon to low-income families, the plan will probably be a greater boon for those in higher-income brackets. That's because, as the National Review's  Reihan Salam points out, tuition for community college is already zero for low-income families.

George Mason University economist Tyler Cowen recently posted an overview of different perspectives of the plan, ranging from the critical to the lukewarm to the positive. Critics argue, among other things, that further subsidies will overburden an already-overburdened system; that the plan will probably lead to even more administrative bloat; that the problem lies with our high schools more than anything else.

Even some who have a more sanguine view of subsidized community college think Obama's plan is taking the wrong tack: The New York Times' David Brooks argues that if Obama really wants to increase opportunities for the poor via community colleges, perhaps he should focus on peripheral means to help low-income students beyond paying for their (already paid) tuition, such as subsidizing living expenses, mentorship programs, remedial courses and child care. These might help mitigate the abysmal community college completion rates.

The upshot to all this being that the issue is a bit more complicated than Obama's favorite mantra: A college degree is a surefire ticket to the middle class.

Same old, same old: The unexamined policies we heard Tuesday night only underscore what we already knew: That the point of the State of the Union is not to lay out concrete, realizable policy goals that have been rigorously debated and critiqued. The point is to grandstand, to signal to one's teammates the proper stance on topics in vogue. Ridden with clichés and empty declarations like "We don't just want everyone to share in America's success, we want everyone to contribute to our success," the State of the Union was pop populism to the core, signaling that Obama is on board with technological innovation, on board with helping the poor and on board with sticking it to the rich; the devil in the details can go to hell.

Besides, none of these proposals have much of a chance of passing in their current form through a Republican-controlled Congress anyway. But what they do have is the convenient potential for the president to later point to Republican obstructionism as the reason for their failure.