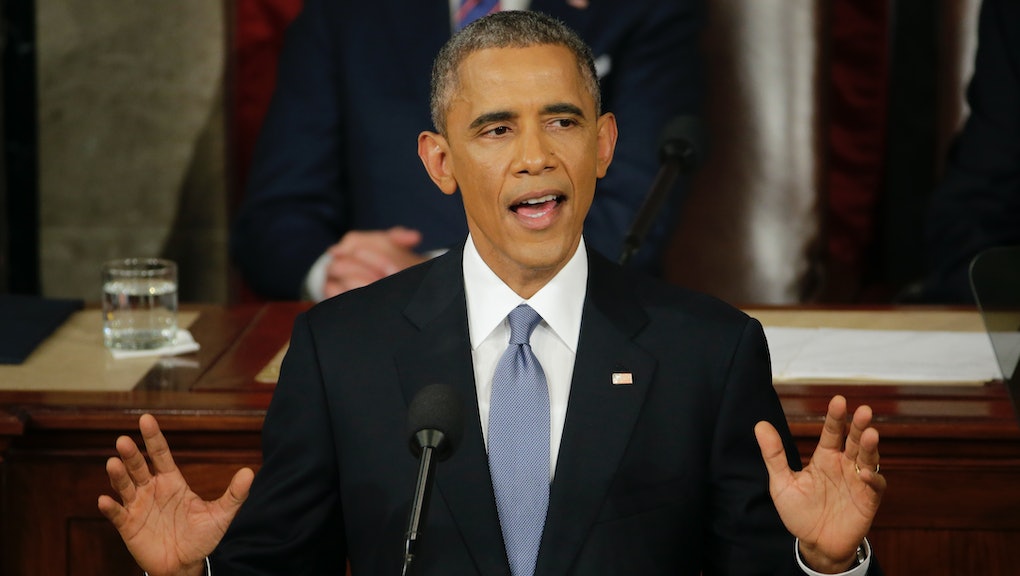 For a guy whose party lost both the House of Representatives and the Senate less than 80 days ago, President Barack Obama sure didn't act like it when he delivered his sixth and second-to-last State of the Union on Tuesday night.

Addressing an all-Republican Congress for the first time in his administration, Obama delivered a full-throated call to action for an unabashedly liberal agenda that surprised even some in his own party. Rather than tucking his tail and licking his wounds, Obama made it clear that he had no intention of backing down from his policy goals, challenging Congress to step to the plate or risk playing catch-up.

While Obama explicitly declined to outline a laundry list of new policy proposals, the president did highlight several new promises. Chief among them was the headline-grabbing initiative that would make two years of technical or community college universally free for those "willing to work for it." Championing what he referred to as "middle-class economics," Obama also promised new tax credits for the average income earner paid for through hikes on the capital gains tax rate — a move quickly decried by conservatives as the largest tax hike in history.

Whether talking about the capital gains tax rate or education funding, the president's rhetorical tone pulled significantly fewer punches than in previous years, charting a high level agenda that looked to paint Republicans as a party opposed to everything from safe infrastructure to basic tenets of science.

Highlighting his policy successes while simultaneously taking not-so-subtle digs at GOP opposition, Obama characterized Republicans as the party against free college, paid sick leave and affordable childcare and in favor of wanting to strip your health insurance away. The message certainly hit home for a troubled GOP leadership, as House Speaker John Boehner's face was permanently stuck somewhere between thoughts of an intimate dinner with Rep. Louie Gohmert (R-Texas) and the idea of new taxes on tanning salons, throughout the president's speech.

The Republicans weren't the only targets of Obama's barbs. Woven into the rhetorical flourishes and personal stories, Obama pushed a forceful framing of the political narrative for Democrats moving into 2016 and beyond. By emphasizing the successful resurgence of the American economy under his watch, as well as the increased access to health care through Obamacare, the president made the case that the domestic vision he had articulated had been vindicated. This message implicitly binds Democrats to his policy vision for the foreseeable future by narrowing the political debate within his party onto a track moving more forcefully to the left.

For a party that shied away from a deeply divisive administration in recent elections, Obama's framing is likely to make both presidential and congressional democratic candidates slightly uncomfortable in 2016, as they balance supporting Obama's policies without tying themselves too closely to him personally. Republicans, whose base could hardly care less whether or not Obama's policies worked, will remain focused on characterizing themselves as the anti-Obama in 2016.

How Obama's State of the Union performance translates into tangible policy and legislative progress remains to be seen. The reality of an all-GOP Congress doesn't suggest much success in the administration's sunset years. Not to mention, with the GOP rebuttal delivered by a freshman senator who promised to make Democrats "squeal" like the pigs she castrated in her youth, Republicans were hardly sending a conciliatory message to the president following his remarks.

However, Obama's recent executive actions on immigration and paid family and medical leave bolster the "come get me" tone of his speech, daring Republicans to stand up and oppose him on issues broadly popular with the American public. While Obama won't be able to pass any kind of tax increases without Congress, his remarks suggest that he'll have no trouble reminding legislators publicly about just how unpopular their foot-dragging will be.

With his last election behind him, Obama appears comfortable to once again serve as chief standard-bearer for the liberal left that catapulted him into office in 2008. The only thing that both Democrats and Republicans can be certain of is that Obama won't spend the last two years of his second and final term quietly planning his presidential library. Instead, he'll roll up his sleeves and get back to fighting the fight that got him elected in the first place. Both times.