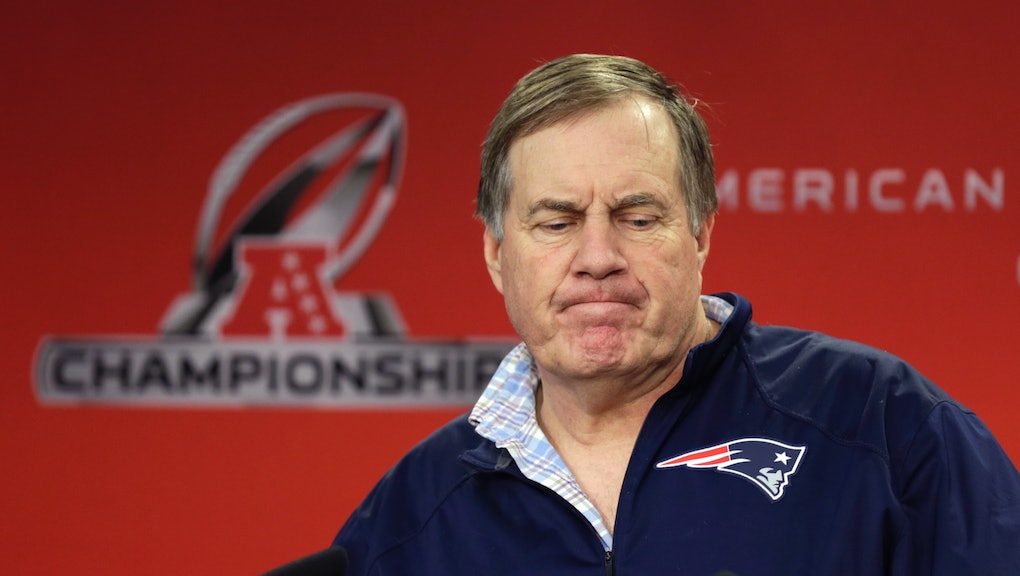 An NFL investigation reportedly found 11 of the 12 game footballs used by the New England Patriots during Sunday's AFC championship victory against the Indianapolis Colts were underinflated, casting a dark cloud over the celebrations and prompting allegations of cheating. It has also inspired the moniker "Deflategate."

With the 45-7 win, the Patriots advanced to their sixth Super Bowl since controversial head coach Bill Belichick took over the team in 2000.

At the center of the controversy is the question of how the game balls became deflated. ESPN reported that all the balls were required to be inspected and approved by a referee prior to kickoff; altering the game balls once they've been approved is barred, per league rules.

According to ESPN, the NFL found that all but one of the Patriots' game balls were inflated two pounds per square inch below league requirements. Though it's still unclear how the deflation may have played into Sunday's game, the NFL launched an inquiry because altering the footballs in any way opens up the possibility of a competitive advantage, ESPN reported.

"Deflating a football can change the way it's gripped by a player or the way it travels through the air," particularly in bad weather, ESPN's Chris Mortensen reported. A deflated ball could have been easier for the quarterback to grip in Sunday's rain at Gillette Stadium in Foxborough, Massachusetts, home of the Patriots.

It's unknown what, if any, penalties the Patriots could face as a result of the incident. Team spokeswoman Stacey James told ESPN the Patriots "have been in complete cooperation with the league and will continue to do so."

ESPN reported a source saying that the league was "disappointed ... angry ... distraught" over the findings, though a spokesman told ESPN the NFL had no official comment.

Prior to the release of the report, the team had brushed off allegations of tampering. Quarterback Tom Brady called the accusations "ridiculous," while Belichick said he wasn't aware of any issue until Monday morning.

But the Patriots aren't new to this rodeo. In 2007 they were caught videotaping the defensive signals of the opposing team, leading to "Spygate." Belichick was fined $500,000, while the team was given a $250,000 penalty and had a first-round draft pick taken away in 2008.

Some Colts players defended their opponents:

While others were more suspicious, with humor:

"The NFL must decide if the investigation reveals cheating and who is responsible. If the Patriots are found to have doctored the footballs, there is likely to be a stiff penalty. The league's options range from making the Patriots forfeit their AFC championship (which is unlikely after a 45-7 victory), suspending those involved from the Super Bowl (including possibly head coach Bill Belichick), and/or fining the Patriots and confiscating future draft picks."

On the bright side, if Belichick or any other players are suspended, at least they have Katy Perry and Lenny Kravitz to look forward to during the halftime show.