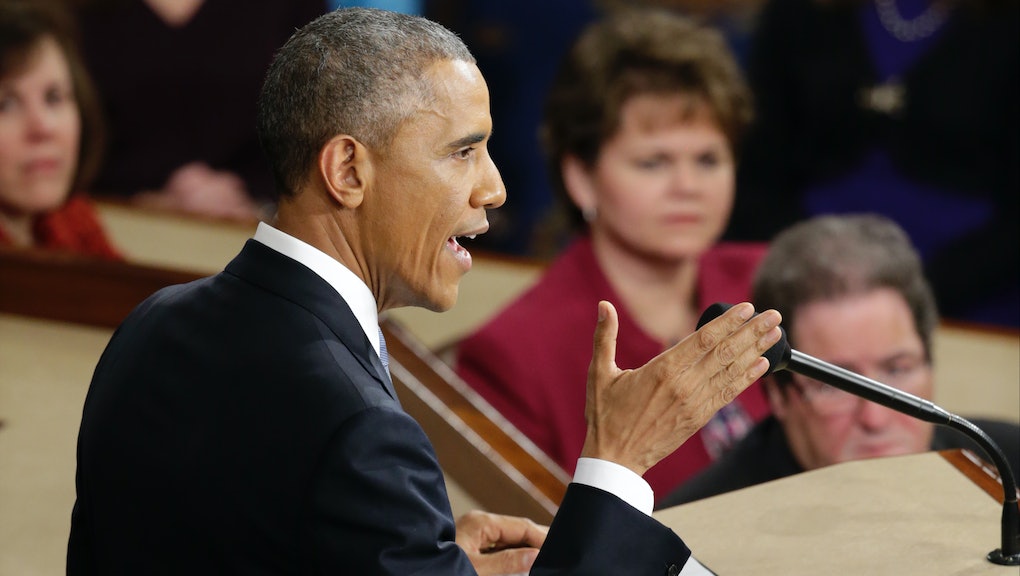 President Barack Obama's State of the Union address Tuesday night wasn't a piece of timeless oratory, but it did stir the hearts of many in the progressive media.

The speech attempted to set up the final quarter of Obama's presidency as a new era, unburdened by the exigencies of the worst economic crisis the country has seen since the Great Depression. Many liberal commenters were persuaded, hailing the remarks as ambitious, a foray into a new paradigm of politics, even the realization of a long-desired Reagan moment.

Lost in the sea of praise is the fact that as Obama has sought to "turn the page," he squandered one of the greatest opportunities he's had to help begin a new chapter for black America.

Obama made two references to the crisis of racialized police brutality that's captivated the nation for months, and both of them were dressed in the colorless language of bland conciliation. The first one went like this:

"We may have different takes on the events of Ferguson and New York. But surely we can understand a father who fears his son can't walk home without being harassed. Surely we can understand the wife who won't rest until the police officer she married walks through the front door at the end of his shift. Surely we can agree it's a good thing that for the first time in 40 years, the crime rate and the incarceration rate have come down together, and use that as a starting point for Democrats and Republicans, community leaders and law enforcement, to reform America's criminal justice system so that it protects and serves us all."

What's important to point out is the agenda to impose symmetry on the relationship between police and the youth they harass, when, in fact, they're incomparable. There is no serious crisis of violence toward law enforcement. While police officers often encounter high-risk scenarios, their chosen profession isn't exceptionally dangerous — they trail construction workers, taxi drivers, garbage men and scores of others in fatality rates — and their job has been growing safer for decades. The year 2014 was one of the safest years on record for police.

On the other hand, young men of color live in the era of mass incarceration and the warrior cop, whose repressive scope is by some measures unprecedented in global history, according to prominent legal scholars like Michele Alexander. Thousands of black boys and men have been killed by the police at 21 times the rate of their white peers, some even before they hit puberty. And while Obama makes a claim about the incarceration rate decreasing, context is helpful: The U.S. incarcerates a significantly greater portion of its black population than South Africa did under apartheid, and more black adults live under correctional control today — in prison or jail, on probation or parole — than under slavery in 1850.

America's carceral system constitutes what many social scientists consider a modern equivalent of the Jim Crow laws in the American South.

All lives matter indeed, but it is only the youth from specific backgrounds whose lives are being systematically treated as if they don't.

The second allusion Obama made was more subtle:

"I want our actions to tell every child, in every neighborhood: your life matters, and we are as committed to improving your life chances as we are for our own kids."

The three words that stand out there are "your life matters," a subtle nod to the slogan and protest movement "Black Lives Matter." Again, Obama stops short of highlighting the lopsidedness of a specific social dynamic. All lives matter indeed, but it is only the youth from particular racial and socio-economic backgrounds whose lives are being systematically treated as if they don't.

Great expectations and great disappointments: "What more can Obama do?" cries out the liberal pundit. Obama's hands are tied; like many racial minorities, he faces an unfair double standard on issues of race, a phenomenon that has been borne out by polling data. If he chooses to weigh in more explicitly about the plight of the black youth or speak explicitly about the need for fundamental criminal justice reform, he will be accused of race favoritism or racism against whites, and lose vital political capital. Obama is far too clever and in tune with racial tensions in America to be so impolitic.

While there is a logic to this, it's worth noting that the reason Obama was able to deliver his Reagan moment while discussing free community college and paid leave and Wall Street taxes is exactly the same reason he could have decided to double down on racial discrimination in law enforcement and imprisonment practices: Obama no longer fears jeopardizing a second term; he doesn't need to fear acting as a liability for Democrats up for re-election during an imminent midterm; the economy is doing as well as it has been in years; the Republicans control both chambers of Congress. He cannot alienate potential legislative allies, and he knows his base is showing signs of hunger for an Elizabeth Warren-style Democrat, one who doesn't apologize for her values and seeks justice with moxie.

It's not just about institutional calculations — the public hasn't been this concerned about race in America in 20 years, and New York City is constantly making national headlines as it reckons with its own reckless police practices.

There's a window of opportunity here that Obama isn't willing to make a use of. If the State of the Union was about transitioning into an activist phase of his presidency, then he could have given special attention to black lives unilaterally the way he has recently on Cuba and immigration. He could use the bully pulpit to request robust legislation on prison reform, or just have been more aggressive rhetorically to set the grounds for future presidential commissions, Justice Department directives or other executive actions.

But Obama is forever cautious and a consummate technocrat. For a technocrat, restoring order after a crisis is probably the greatest one can hope to achieve. For others, the current order is the problem.