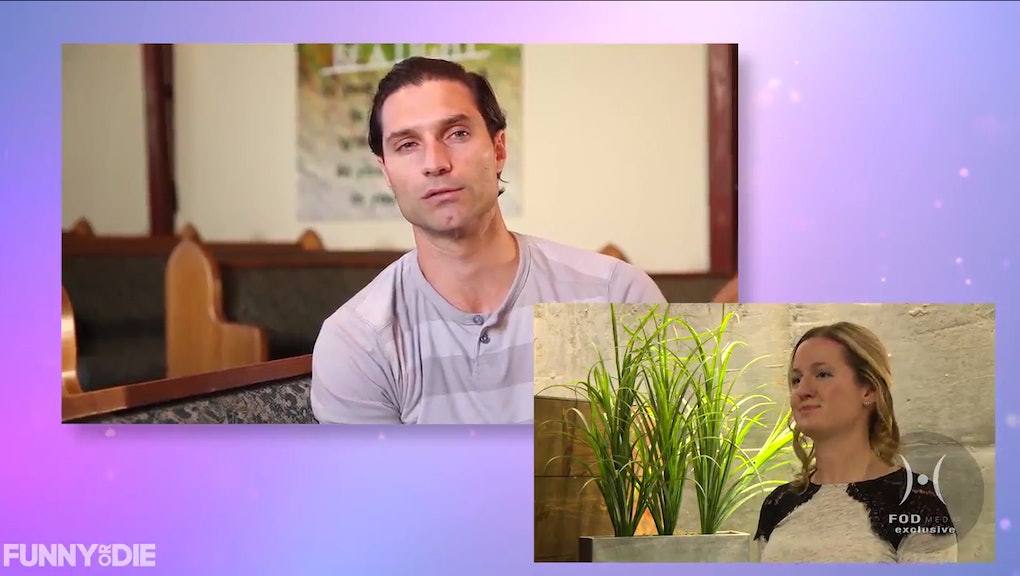 It's unfortunate that some men feel women need to be "rescued" from making important decisions about their bodies.

Last week, a group of men appeared in a video for faith-based organization Heroic Media, apologizing to women and their unborn fetuses for not "manning up" in the fight against abortion. Moving into even more troublesome territory, each guy proclaimed that he felt like he was the one who'd had the abortion. They then made a general appeal to the women they'd slept with, as well as millions of other Americans. In short, there was a whole lot of "sorry" going on.

Oh, how the tables have turned. In a snarky yet pointed response from Funny or Die, a female trio flipped the script on the misguided mea culpa, revealing why the original apology was a ridiculous idea. Let's just say it's women's turn to have their say in the matter (since, after all, it is their decision).

"I'm sorry you were subjected to such a video and no one tried to rescue you," one of the actresses tells the camera. "Well, I guess we're trying to rescue you now. And for that, I'm also sorry."

As these ladies note, the men are wasting everyone's time apologizing about the wrong things. This isn't their choice to make, no matter how they frame it. At the end of the day, women are in a much better place to talk about reproductive health, but it's not enough to simply have a uterus.

But that's not the only problem with Heroic Media's appeal. As the Funny or Die women point out, co-opting a woman's story without her permission to make a political point is problematic in itself.

"I'm sorry those guys spread around such personal information," an actress says. Another adds: "I'm sorry they were so specific with timelines and details. ... Why don't you just draw a map to the ladies' houses?"

According to information from the Centers for Disease Control, the abortion rate in the U.S. has steadily declined over the past four decades. As Mic's Sophie Kleeman reported, this decline is attributed primarily to improved access to contraceptive methods, another option that also faces fierce opposition from some opponents of abortion.

This is exactly the kind of information that is lost when conversations over reproductive health are derailed by clueless men who, despite their ignorance on women's health topics, often make critical decisions that impact millions.

That's a large part of why the new female-powered video, albeit cheeky, makes an important point.

"I'm sorry that I didn't stop this video from happening," one woman shared.

"I mean, it was their choice to make it. Still, I take responsibility," a third noted.

Even better, the video implies, would be if men would stick to apologizing for things that actually merit the gesture.