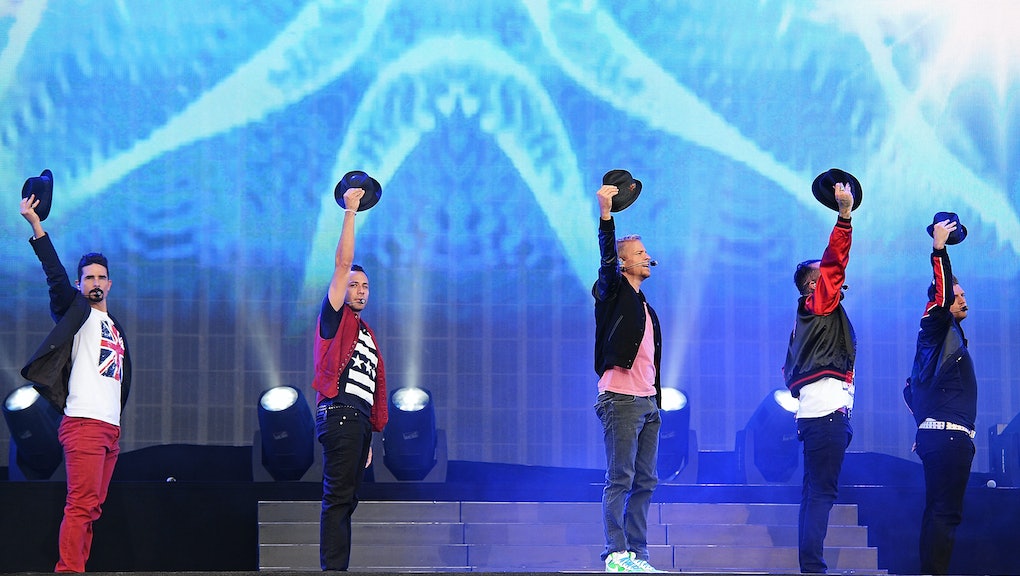 Back in the '90s, few boys were more debonaire than AJ, Howie, Nick, Kevin and Brian of the Backstreet Boys. They had the coolest moves, sang the coolest songs (some of which are still maddeningly catchy) and had the coolest videos. They enjoyed a meteoric rise to fame, but almost as quickly as they rose, they faded away.

Many of us likely never stopped to ask why. But an upcoming documentary, The Backstreet Boys: Show 'Em What You're Made Of, will remind Backstreet's fans of the grim circumstances that hastened their demise. The biggest dreamboats of the '90s had almost everything they ever worked for stolen from them by their ex-manager, Lou Pearlman, who's currently serving a 25-year sentence for running a $300-million Ponzi scheme.

The man who started the boy band revolution is one of America's most notorious white collar criminals, and one of the biggest scumbags music has ever seen. The following clip from the Backstreet Boys documentary, shared by Vulture, shows it as clear as day.

Everything you think you know about boy band lore may be about to flip on its head.

"We were being taken advantage of and no one was looking out for us," Brian Littrell says in the clip as the boys go to visit Pearlman's old mansion. The band is palpably anxious, and for good reason: The money they earned with their singing and dancing likely paid for that house. And this was a man the band once trusted – a man they once called "Big Poppa."

"To find out he was a conman the whole time makes you think, was anything ever true – anything you ever said to us or did for us?" says AJ McLean. "Was all it really true? Or was it half and half? Or was it all bullshit?"

Looking at their history with Pearlman, it was probably mostly bullshit.

At first, Pearlman acted as a father figure. Before getting into the boy band game, Pearlman was a blimp salesman. Looking at the success of Boyz II Men and New Kids on the Block, he saw tremendous business potential in pop music. To tap into the scene, he created the Backstreet Boys, insisting they were a "family," of which he was the head. He also founded 'N Sync and LFO, essentially manufacturing all those playground conflicts over which group was the coolest. He never told the Backstreet Boys he was also managing their biggest rivals.

As the Boys exploded commercially, they began to grow suspicious that Pearlman had been skimping with their profits. After years of success between 1993 and 1997, the band only made a total $300,000, which comes to a pitiful $12,000 per year per band member. Grantland claims that's equivalent to sweatshop labor when compared to the millions Pearlman was making.

The Backstreet Boys sued, settled and split with him in 1998. They had a few more rounds of smaller suits over the ensuing years, with 'N Sync leveling their own charge in 2006. All these suits were settled out of court. By then, Pearlman's legal troubles were growing bigger than his boy bands.

Pearlman's Ponzi scheme: In 2007, Pearlman was charged with managing a $300 million Ponzi scheme, one of the world's biggest. He described it in detail to the Hollywood Reporter, claiming it was much "smarter" than financier Bernie Madoff's, which went undetected for decades and scammed his investors out of $65 billion.

It was only smarter because he had actual revenue to invest, which he was also stealing from all the boy bands he managed, rather than simply redistributing other investors' money. His investors' money never went towards any of the goods and services he promised them. For instance, Pearlman funded a fleet of charter airplanes that never actually existed. He "borrowed millions from banks based on false financial statements and tax returns prepared by a phony accounting firm," according to the Tampa Times; all that money "flow[ed] out as soon as it came in, with a good chunk of it going to support Pearlman's lavish lifestyle."

When it all came crashing down in 2007, Pearlman fled the country to avoid prosecution, leaving his investors short an estimated $500 million. His actions broke families and ruined businesses. The FBI eventually tracked him down in Bali, and he's now serving 25 years in a Florida lock-up for conspiracy, money laundering and false claims in court.

The whole odyssey is incredibly disturbing. It adds a whole new dimension to the critique that '90s pop music sounds so manufactured. It was – as a scam masterminded by a scumbag blimp salesman turned music industry maven.

"The sad thing is, Lou could have had it all," 'N Sync's Lance Bass once said. "He could have had the new Motown in Orlando. But that's where greed comes in. He was just a really greedy person."

The Backstreet Boys clearly have had much darker careers than their music suggests. Who knows what they could have built if Pearlman had never left them disillusioned and disenfranchised? Check to see what other stories emerge from the dark depths of the Backstreet Boys documentary when the film drops in full on Jan. 30.