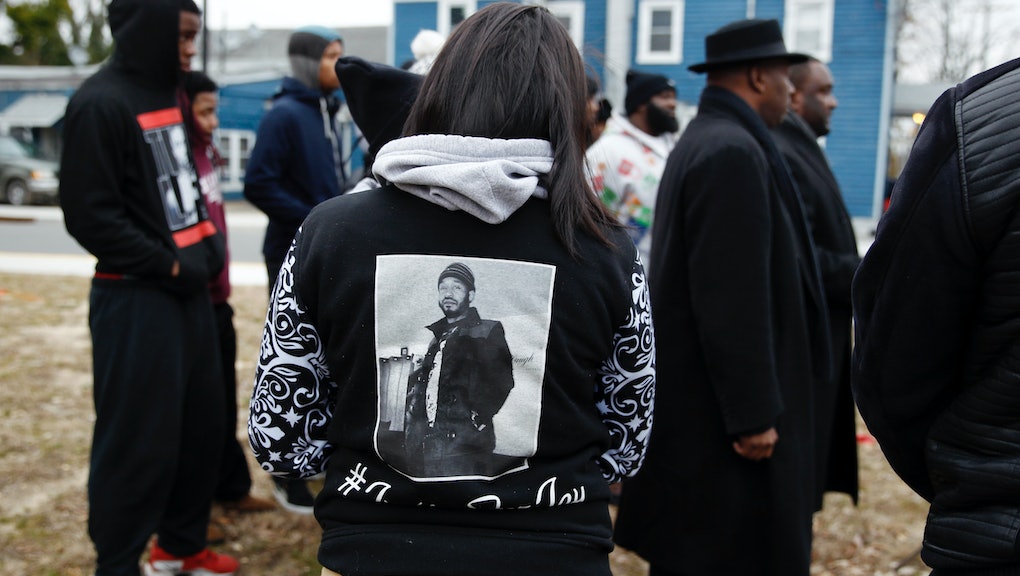 A police officer shot and killed Jerame Reid during a traffic stop Dec. 30, 2014, in Bridgeton, New Jersey. Now, three weeks later, footage from the police car's dashboard camera shows the fatal shooting, which occurred after Reid stepped out of his car with his arms raised.

The under three-minute video shows how quickly the routine traffic stop escalated. Police initially pulled over the car the 36-year-old Reid was riding in for rolling through a stop sign. When the officers approach the car, Officer Braheme Days tells his partner that there is a gun in the glove compartment.

Days can be repeatedly heard yelling for Reid to "Show me your hands!" and "If you reach for something, you're going to be fucking dead!" He then appears to reach into the car to remove the gun; it's unclear from the footage what Reid was doing at this point.

"I ain't got no reason to reach for nothing, bro," Reid can be heard saying.

Days then orders Reid not to move, but the passenger door opens and Reid gets out. His hands are raised and appear to be empty, but the officers fire about six shots. Reid later died in the hospital.

The response: Reid's death has sparked protests in Bridgeton, roughly 35 miles from Philadelphia. About 100 demonstrators gathered Jan. 7 to protest the shooting, and activists have requested that the case be transferred to the state attorney general's office.

"The video speaks for itself that at no point was Jerame Reid a threat, and he possessed no weapon on his person," Walter Hudson, founder of the civil rights group National Awareness Alliance, told the Associated Press. "He complied with the officer and the officer shot him."

Reports from the days following the shooting indicated that Reid was armed at the time; the video evidence neither confirms nor denies this. Both Days and his partner have been placed on leave while the investigation continues.

In the follow-up to this shooting, the AP has also noted that Reid previously spent 13 years in prison for shooting at three state troopers when he was a teenager and that officer Days actually knew Reid from an arrest last year on several charges including "drug possession and obstruction."

The case echoes others. As the Associated Press notes, Reid's death follows months of protests over the deaths of unarmed black men by police officers. Reid was black, as is Days, though his partner, Roger Worley, is white.

The circumstances surrounding the shooting are still unclear, but at the very least, the dashboard camera footage appears to show Reid attempting to comply with the officers' orders. As the attorney representing Reid's family cautioned, however, "It would be premature to draw any conclusions without further reflection."

Still, the incident is yet another reminder of the country's ongoing problem with police violence, and it certainly gives credence to Tuesday's State of the Union address, in which President Barack Obama spoke of the need to "reform America's criminal justice system so that it protects and serves us all."