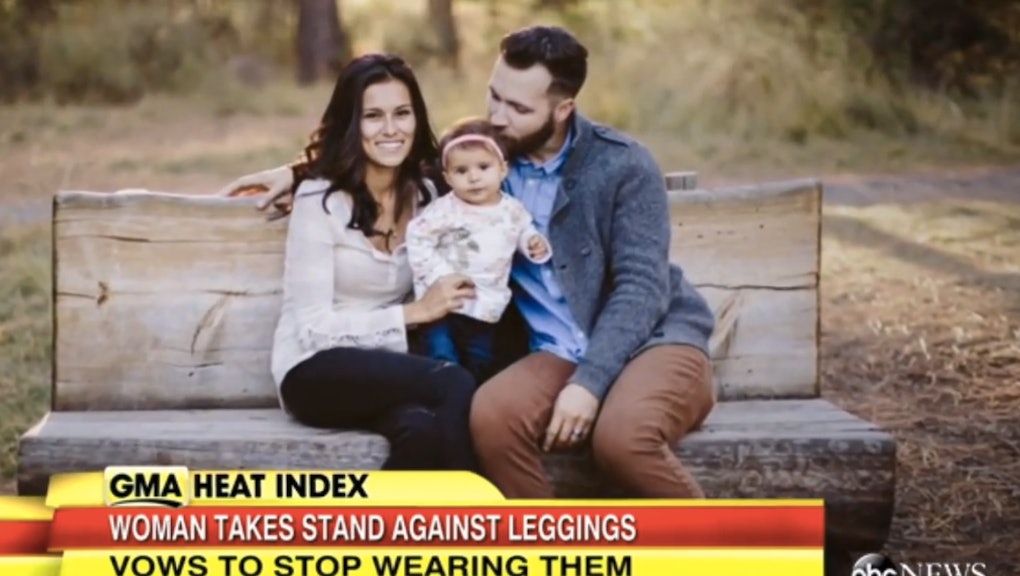 A woman is giving up leggings ... for Jesus.

In a short and sweet post, religion blogger Veronica Patridge detailed her decision to stop wearing the popular clothing item in order to help keep men focused on what's important. The Oregon mother of one said that the decision had been weighing heavy on her heart, especially after a conversation with some friends about how leggings "creates a stronger attraction for a man to look at a woman's body and may cause them to think lustful thoughts."

"I went home later that day and shared the convictions I was having with my husband," Patridge wrote. "Was it possible my wearing leggings could cause a man, other than my husband, to think lustfully about my body? I asked my husband his thoughts on the matter when he got home. I appreciated his honesty when he told me, 'yeah, when I walk into a place and there are women wearing yoga pants everywhere, it's hard to not look. I try not to, but it's not easy.'"

Not surprisingly, Partridge's post has gone viral, and conservatives are hailing her decision to choose "modesty." But what these reactions overlook is what her decision reinforces about cultural double-standards between men and women. There's nothing wrong with Patridge choosing what to put on the in the morning; that is her right, after all. The problem lies in the idea that she might need to change her attire because of men's "inability" to control their wandering eyes.

Christianity, especially its Western iterations, doesn't exactly have a perfect track record when it comes to sex and sexuality. Indeed, some churches emphasize a woman's need for purity in a world full of lustful men. "Purity culture frequently places women in a position where they are objects for men to place expectations upon — and this includes dress," Dianna Anderson author of Damaged Goods: A New Perspective on Purity Culture told Mic. "Modesty and purity are intertwined forces in a woman's life, centering her life and her actions around how men perceive her, as opposed to how she perceives herself."

And that's not the only problem with Partridge's fashion statement. The idea that women must change themselves in order to appease the male gaze is directly related to the idea that men can't control themselves around women, a basic tenet of rape culture. Dress codes enforcing and perpetuating this flawed thinking pop up across America, especially in schools, where young women are told to watch the shortness of their shorts, the hemlines on their dresses and the curvature of their breasts. These gender-specific dress codes have some fairly transparent effects. As Maureen Shaw noted for Mic earlier this year, officials use "sexist stereotypes to penalize and demean female students. This is especially problematic for adolescent and teenage girls, whose bodies are maturing, and who are being taught that their clothes — and bodies — are 'distracting' for male peers. The implication here is that boys can't be trusted to contain themselves in the presence of such temptresses."

It's been said a thousand times, but it bears repeating: women shouldn't be shamed for what they have hanging up in their closets. Unlike what some people what would have you think, men aren't animals. We can control ourselves and our impulses. And it's time we got to the root of the problem and started teaching men self-control instead of expecting women to eliminate any behavior that might distract us. Not only is that impossible, it's absurd.