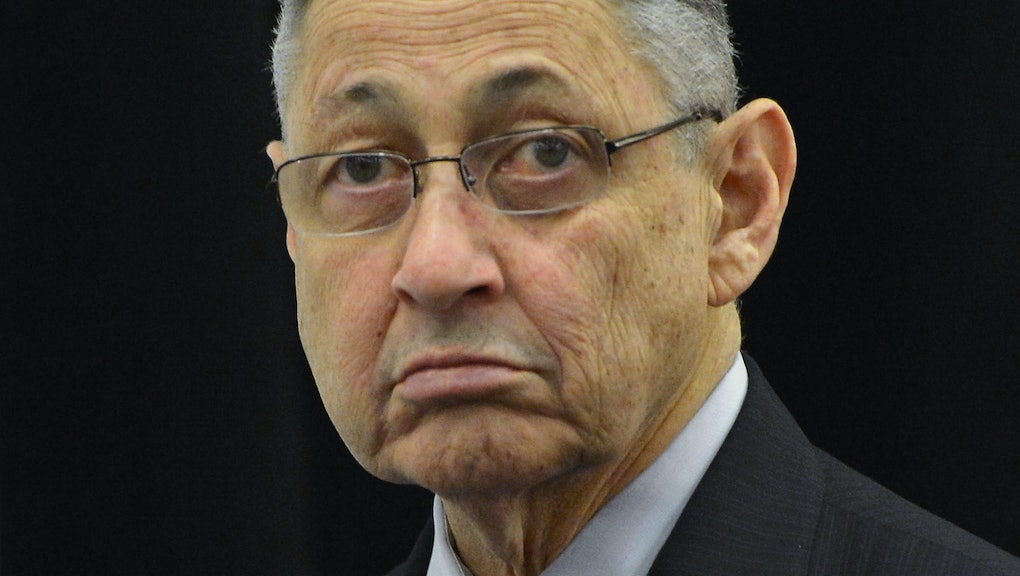 Sheldon Silver, the Democratic speaker of the New York State Assembly and one of the state's most powerful political figures, was arrested on federal corruption charges early Thursday morning in Lower Manhattan, the New York Times reported. His arrest was the culmination of an investigation led by Preet Bharara, the U.S. attorney for the Southern District of New York.

According to the New York Daily News, federal agents charged Silver with multiple counts of fraud and "using the power and influence of his official position to obtain for himself millions of dollars in bribes and kickbacks masked as legitimate income" through the legal work.

At the heart of the inquiry was a series of payments Silver received from a small law firm that chases after reductions of New York City real estate taxes. While it's legal for lawmakers to have outside income sources, Silver didn't disclose the payments to the state, and the details of his work for the firm were a mystery.

Silver's arrest is shocking. Vox's Matthew Yglesias writes that Silver is "probably the single most important person in the past generation of New York politics." This is thanks, in part, to his exceedingly long tenure: Silver has held the speaker position since 1994.

Silver also wielded considerable power in the New York state government, described as being one of Albany's "three men in a room" — the governor, the speaker and the Senate majority leader — who, more than voters or even the state legislature, shape policy and politics across New York. As Yglesias points out, the governor and the Senate leader have always rotated in and out, but Silver has stayed firmly put for two decades.

Given both the length of his tenure and the importance of the legislative political structure in New York, Silver has been a key player in a large number of the state's policy decisions. He's also been a longstanding representative of the "institutional status quo," as Yglesias puts it — one that is largely seen as one of the most corrupt in the country.

His work with outside law firms has also long been viewed with suspicion, and his failure to disclose these contributions, which total about $6 million, seems to be the straw that broke the camel's back.

What happens next? Bharara, the bulldog U.S. attorney, is expected to announce Thursday afternoon further details about Silver's arrest.

What is clear already is how big a shake-up the charges will likely bring. Though the initial investigation received a largely mute response from New York lawmakers, the arrest spurred state Sen. Brad Hoylman to call for Silver's resignation:

"The arrest of Silver will likely spark political upheaval in Albany, the state capital, less than two weeks after the new legislative session opened," Reuters wrote.

The charges against Silver may also cause trouble for New York Gov. Andrew Cuomo. It appears that the evidence that led Bharara's team to Silver was from a separate investigation of the Moreland Commission, an ethics committee Cuomo shut down abruptly in March 2014.

Bharara subsequently stepped in, citing concerns that ethics investigations were being killed off at the expense of political dealmaking. If Bharara did indeed collect evidence of Silver's misdeeds during the course of the Moreland investigation, it's possible that Cuomo will be implicated by proxy.

Either way, Democrats in New York are facing upheaval. Silver's indictment — by a member of his own party, no less — will likely have substantial fallout, though it's unclear what exactly it will look like. The arrest "would create a power vacuum in the Assembly, where there are many new faces but no clear heir apparent," according to the Daily News.

Bharara's aggressiveness with Silver may also be an indication that he'll be tackling corruption at large. In October, he told a radio station in New York that the state's government had become "a little bit of a corruption disaster" due to its lack of self-policing.

Silver, for his part, has remained largely mum, even as he turned himself in to FBI agents Thursday.

"I hope I'll be vindicated," he reportedly said, according to the Times.